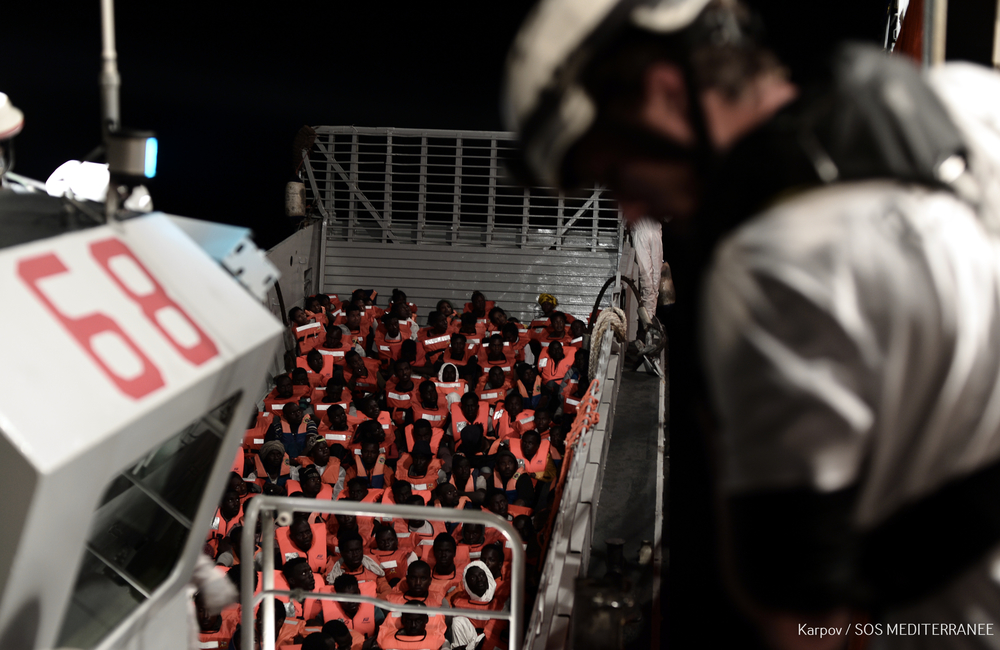 Following this week’s political stand-off over the fate of people rescued in the Mediterranean, Médecins Sans Frontières/Doctors Without Borders (MSF) denounces Italy’s closure of its ports to prevent 630 rescued people from disembarking and European governments’ choice of political point-scoring over saving lives at sea.

“The men, women, and children on board Aquarius have fled conflict and poverty, and have survived horrific abuse in Libya. They have been shipped from one boat to another like cargo and endured the elements on an unnecessarily long journey at sea,” says Karline Kleijer, MSF Head of Emergencies.

“We are grateful to Spain for stepping in, even as Italian and other European governments have shamefully failed in their humanitarian responsibilities and placed politics over the lives of vulnerable people.”

People waiting at the port greet the arrival of the Aquarius with a round of applause. A long ordeal is finally coming to an end pic.twitter.com/S5oBeTvm6Q

Ahead of the European Council meeting next week, MSF calls on European governments to put human lives first. They must facilitate swift disembarkation in the closest safe ports in Europe where rescued people can receive adequate care, and ensure those in need of international protection are able to apply for asylum or other forms of protection.

“The smear campaign against NGO ships has to stop. Our only intention is to save lives at sea."
Karline KleijerMSF head of emergencies

Over the weekend of 9 and 10 June, the Aquarius search and rescue vessel, operated by SOS Méditerranée in partnership with MSF, rescued more than 200 people and received an additional 400 people from Italian naval and coastguard ships.

Although the rescue and transfers of the 630 people were initiated and coordinated by the Italian Maritime Rescue Coordination Centre (MRCC), the Italian authorities denied Aquarius authorisation to bring them ashore in the closest port of safety in Italy.

In doing so, they broke with past practice and international law. Malta, which had the nearest safe port, also refused to allow the Aquarius to disembark, citing Italy’s coordination role and responsibility.

Eventually, on 11 June, the Spanish government intervened and offered to let Aquarius disembark in Valencia, 1,300 kilometres away.

MSF continued to press the Italian authorities to authorise disembarkation in the closest safe port as stipulated under international maritime law. MSF also raised serious safety and humanitarian concerns connected to sailing with 630 passengers in an overcrowded boat for four more days without adequate shelter or sufficient food.

“Often, the Italian authorities appeared callous. At first, they suggested that MSF transfer any vulnerable people. However, when MSF provided a list of almost 200 people, including unaccompanied minors, the sick and injured, pregnant women and women with children traveling alone, they refused.

"The Italian authorities then requested that we transfer only the seven pregnant women, but failed to respond to MSF’s concern about separating families and the need for husbands to accompany their pregnant partners,” said Kleijer.

Despite MSF’s concerns about the humanitarian and medical impact of the sea journey to Valencia, the Italian authorities instructed Aquarius on 12 June to transfer 524 people back to Italian ships and embark with the remaining 106 rescued on a four-day journey to Spain.

“Italian authorities shamefully closed their ports to 630 rescued people and moved them around the sea for political point-scoring,” says Kleijer. “Even if Italy has legitimate grievances about other European governments failing to accept their share of refugees, that’s no justification for this degrading treatment.”

This week’s events in the Central Mediterranean underscore the wider political dynamics on migration in Europe. Many European governments have not prioritized saving lives of vulnerable migrants and refugees at sea. Instead, they have tightened their borders and closed their doors.

They have actively supported the Libyan coastguard to return people rescued in international waters to Libya, where they will be forced to endure further inhumane and abusive treatment.

Throughout Europe, governments have not given enough support to frontline countries, such as Italy and Greece, who process the vast majority of arriving asylum-seekers and migrants. They have not taken their responsibility in sharing the relocation of asylum-seekers across Europe.

“Europeans governments must appreciate the importance of search and rescue. More than 500 people have drowned in 2018 while attempting the perilous journey on unseaworthy dinghies across the Central Mediterranean. According to news reports, 12 people died this week in one incident in which a US naval ship rescued 40 survivors after their dinghy capsized,” says Kleijer.

Aquarius is one of only a few remaining independent non-governmental search and rescue vessels still operating in the Central Mediterranean. Yet this does not mean the need is gone.

By 8 June, Aquarius had already rescued and/or transferred 2,350 people in 2018, all of whom would otherwise have drowned. Independent search and rescue capacity has dwindled over the past year due to bureaucratic barriers and legal proceedings against staff working for non-governmental search and rescue initiatives.

“The smear campaign against NGO ships has to stop. Our only intention is to save lives at sea. It is hard to explain why Aquarius could not disembark the 629 rescued people and had to set out on a four-day journey to Spain, while one day later the Italian coastguard vessel Diciotti was allowed to disembark 900 people in Italy,” says Kleijer.

“Valencia is the end of a terrible ordeal for 630 people. But there needs to be a serious European commitment to save lives and disembark rescued people properly. As long as governments fail to fulfil their responsibilities, the teams on board Aquarius will continue to conduct search and rescue operations in the Central Mediterranean.”