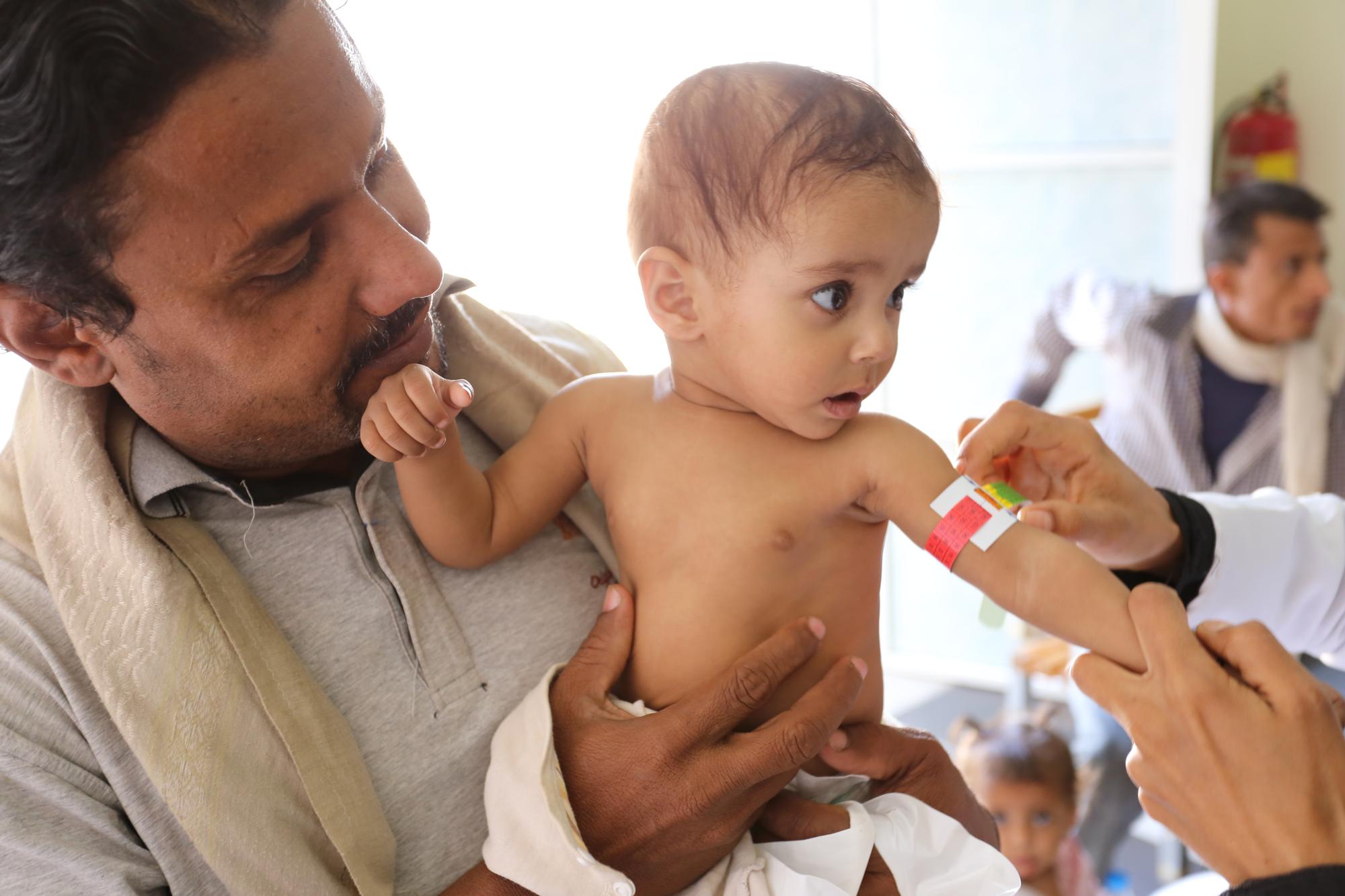 The birth of 24 babies marked the first anniversary of the opening of our Mother and Child Hospital (MCH) in Taiz, Yemen.

The figure represents “a new record for childbirths,” says Georgina Brown, MSF’s medical team leader in Taiz. “The maternity ward was so busy that we had to use some beds in the emergency room (ER).

“We are thrilled to see all the newborns and their mothers recovering well.”

On 7 November, we opened the MCH in Al-Houban, Taiz, to improve access to healthcare for women and children in one of the areas hardest hit by the war in Yemen.

In the past year, 3,123 babies have been born in the hospital.

Trygve Thorson/MSF
Raghad, a 10 months old little girl, is at the ambulatory therapeutic feeding centre in the MSF Mother and Child Hospital in Al Houban, Taiz, for the fourth time. Her father, Khaled, who works in a metal workshop, brings her in once every week, to be controlled and to get therapeutic food for her for the next week. This time, also one of her brothers, Amer, four years old, is with them. Two months ago, Raghad’s mother fell sick, and there was no one to take care of Raghad. The mother was too weak to breastfeed her. Her mother needed surgery, and was hospitalized at a private hospital. The family could not afford it, but a rich businessman supported her treatment. The mother is still in the hospital, recovering. Raghad became sick, like from a flu, and became very weak. When she was admitted to the ATFC, nine months old, she weighed only 5,5 kilo. After her mother was hospitalized, her aunt have been taking care of her, feeding her some rice and artificial baby milk. But the milk is hard to find now, and it’s very expensive. Last week, they could not find any.

Taiz has seen some of the fiercest fighting since the escalation of the conflict began 20 months ago, with shelling, airstrikes, bomb blasts, landmine explosions and sniper fire happening almost daily.

Our hospital is the only facility providing free maternal and child healthcare in the area, and has seen an increasing number of patients over the last 12 months.

The 108-bed hospital runs 24/7 with the support of 365 staff coming from over 10 countries, the majority of whom are Yemeni.

Because of the difficulties in accessing healthcare, many women and children arrive at the hospital at the very last minute, with serious complications.

One of the 24 babies born on the anniversary of the MCH was a little baby girl, whose mother came in very late.

“The mother arrived to the MCH after having some complications during labour in a private hospital an hour away, before being referred to us because she couldn’t afford the care there,” says Brown.

“She was suffering from preeclampsia (a serious condition characterised by high blood pressure, with the risk of developing seizures or failure of the liver or kidneys), and after the delivery she also suffered from post-partum hemorrhage (heavy bleeding), which required a blood transfusion.

"It was a complicated birth, but thankfully our doctors were able to provide the necessary care.

"Both mother and baby are now doing well”.

Throughout Taiz city and its surroundings, the impact of war on residents has been keenly felt by all.

Many residents have lost family members, homes and livelihoods, and live in constant fear of violence.

We provide life-saving healthcare on both sides of the frontlines, and support four hospitals in Taiz city.

We also run a trauma centre in Al-Houban, treating war-wounded and other patients in need of medical care.

As an impartial and neutral medical humanitarian organisation, MSF supports and runs 30 hospitals in eight governorates across Yemen, treating people irrespective of their religious, tribal, political or other affiliations.

More than 50,000 war-wounded have been treated in MSF-run or supported hospitals across Yemen since March 2015.

FIND OUT MORE ABOUT OUR WORK IN YEMEN