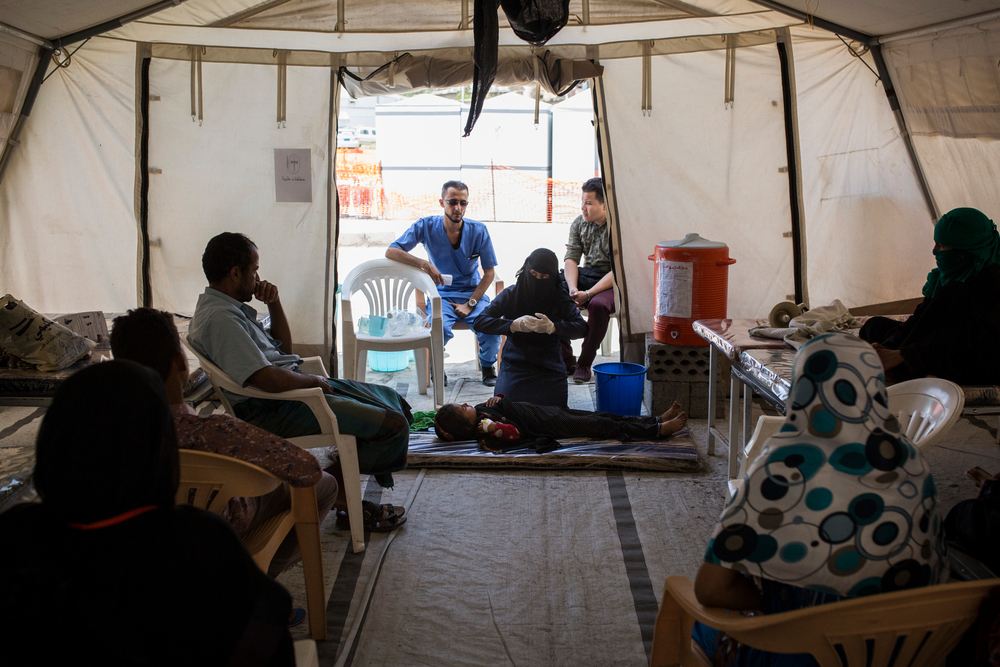 Yemen patient story: “There is food in the shops but no money to buy it”

Fatima sits on the bed next to her 18-month-old son Ishaq, her legs bent under her chin in front of her.

They arrived the day before to the cholera treatment centre (CTC) operated by MSF in Al Qaeda city, Ibb governorate, after a four-hour journey from Shokan, a village located in Mawia district, in Taiz governorate.

“He fell ill three days ago,” she says, gesturing towards Ishaq, “but at first we were hoping he’d get better so we waited.”

After two days, the boy’s diarrhoea and vomiting persisted, so his parents borrowed 9,800 Yemeni rials (£29) from a neighbour to cover the transportation costs to a private pharmacy near their village.

“Because of the war, we can’t even afford to buy food anymore. There is food in the shops but no money to buy it.”
fatimamother of ishaq, msf patient

Cost of the blockade

“They gave him an injection and we went home.”

The next morning, as Ishaq’s health showed no sign of improvement, a neighbour advised Fatima to take her son to Al Qaeda city, where he had heard that Médecins Sans Frontières/Doctors Without Borders (MSF) was providing cholera-related care free of charge.

“We didn’t come the first day because we didn’t have money to pay for the trip.

"We had already borrowed money from a neighbour to go to the pharmacy, so no one wanted to lend us money anymore. But my husband convinced them.”

She hopes her son will be discharged today because every day the price of the fuel increases, and so too do the debts she will incur to pay for the journey home.

As a daily worker, Fatima’s husband used to earn the equivalent of £4.50 a day. But he no longer finds work every day. “Because of the war, people have no money so they don’t give him jobs.”

To pay back some of the money they borrowed, Fatima is considering selling the family’s two goats, which could bring in approximately £39.

“Because of the war, we can’t even afford to buy food anymore. There is food in the shops but no money to buy it.” According to her, a 10kg bag of wheat in her village used to cost £12 - now it costs £27.

Besides cholera, Ishaq already suffers from moderate acute malnutrition – a condition which does not necessarily imply hospitalisation but would require him to receive supplementary feeding every two weeks for a few months.

Upon discharge from the CTC, Ishaq will be registered in the nutritional programme of Al Qaeda Hospital’s outpatient department and receive treatment for 14 days.

But given the high transportation costs, it is unlikely that his parents will be able to bring him and without proper follow-up, his condition will deteriorate.