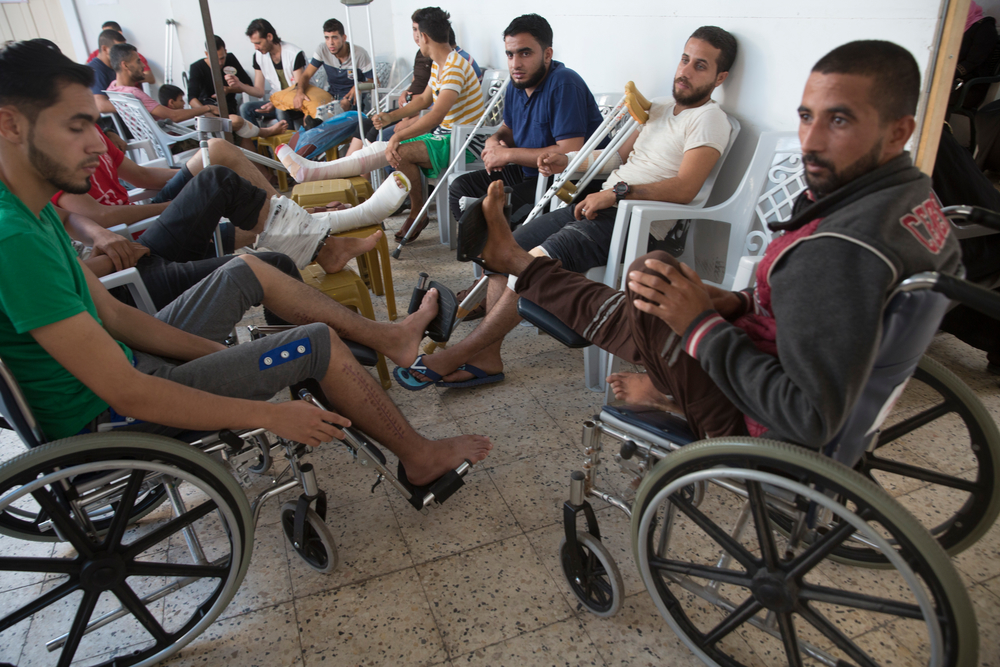 Gaza: “I’m scared for the future. Will I be able to walk again?”

Jacob Burns works as a communications adviser for MSF. He recently visited Gaza, in the Occupied Palestinian Territories, where our teams are treating huge numbers of patients for gunshot wounds following the March of Return protests.

For me, places become marked by certain words. A quirk of the local vocabulary heard so often that it creeps in and colours my mental picture of the place.

In Gaza, talking to MSF’s patients, that word was “gaad” – the Arabic for “sitting”. They drag the word out, lengthening the syllables to the limit of what is possible. A certain defiant slowness that recalled someone easing themselves down onto a couch.

One reason that I heard “sitting” so frequently there is that getting shot in the leg makes it difficult to do much else… and a lot of Gazans were shot recently.

Since the March of Return protests began at the end of March 2018, the Israeli army has inflicted gunshot wounds on over 4,100 people – and MSF has treated over 1,700 of them.

The vast majority of patients have been shot in the lower limbs. This sudden and deliberate outbreak of smashed legs has resulted in a new demographic: those without much choice but to sit and wait to heal.

“Why did I go to the protests?” asked Musaab Musa, as he sat in the Khan Younis clinic.

A keen journalism student, he had a bandage tied around the small part of his foot left after amputation.

“For a long time I wanted to go to the fence, just to see it. I wasn’t throwing stones, I was just sitting down when I got shot. It felt like electric, and then my brother picked me up and took me back to the ambulance.”

He is one of many of our patients suffering life-changing effects from his wound: bullets have smashed bone, gouged out flesh and ripped away nerves and veins.

Never have our teams dealt with so many gunshot wounds in such a small amount of time.

Heidi Levine/Sipa Press
Abdullah, 13, was shot during the protests. His amputation is one of the most extreme cases seen by our teams.

Patients come to our clinics in the morning, bringing their legs – encased in metal to hold the broken bones in place – for a dressing change, trying to stave off the bone infections that stalk many.

“I’m a little bit scared for the future. Will I be able to walk again?”
Musaab MusaMSF patient

It is a vast effort.

Julia Amando, an MSF surgeon from Brazil, explained to me the stakes for the patients she was operating on:

“When you lose a lot of tissue because of a gunshot wound, lots of sensitive structures become exposed, like your bones, so you can get a fatal infection or lose the limb if the wound is not closed.”

That was her job as a plastic surgeon, cutting and moving muscles precisely to fill wounds with living tissue. That will not heal the patient, however, only stabilise them.

“Even when the wound is closed the fracture is still present, there is a lot of a bone loss. So, the patients will need a bone graft, putting another piece of bone in the gap,” she said.

The future for Gaza

There is another reason why I heard “gaad” so often: Gaza’s economy is near collapse.

Heidi Levine/Sipa Press
An MSF surgical team at Shifa Hospital operate on Izzadine, 23, who was shot in the leg.

“Before I was wounded, I had been studying at university, but then I had to drop out and I was sitting at home because of a bad financial situation,” says Mohammed Dashan, 19, from az-Zeitoun.

He says that political anger drove him to take part in the protests and that he was shot twice: a minor wound on March 30 did not stop him from going back. His leg was then shattered by a bullet on May 11.

“My father is also unemployed. Now, I sleep in bed, get up to pray, then I sit about more. I don’t feel good. I’m angry, bored. How I feel, it’s not natural,” he told me, showing a small moment of vulnerability in an otherwise studiously maintained detachment.

He insisted, however, that he pays no mind to the long-term effects of his wound.

Many others, however, were more open about what their wound meant for them.

“The hardest thing about the injury is not being able to walk,” said Musaab.

“I’m a little bit scared for the future. Will I be able to walk again?”

It is a question that MSF’s surgeons are not able to answer for many yet, as spring turns to summer and patients sit home, waiting to see what heals.

MSF is sure, however, that without complex surgeries – unavailable in blockaded Gaza – the answer for a significant proportion of our patients will be, unfortunately, “no”.

Our work in Palestine >