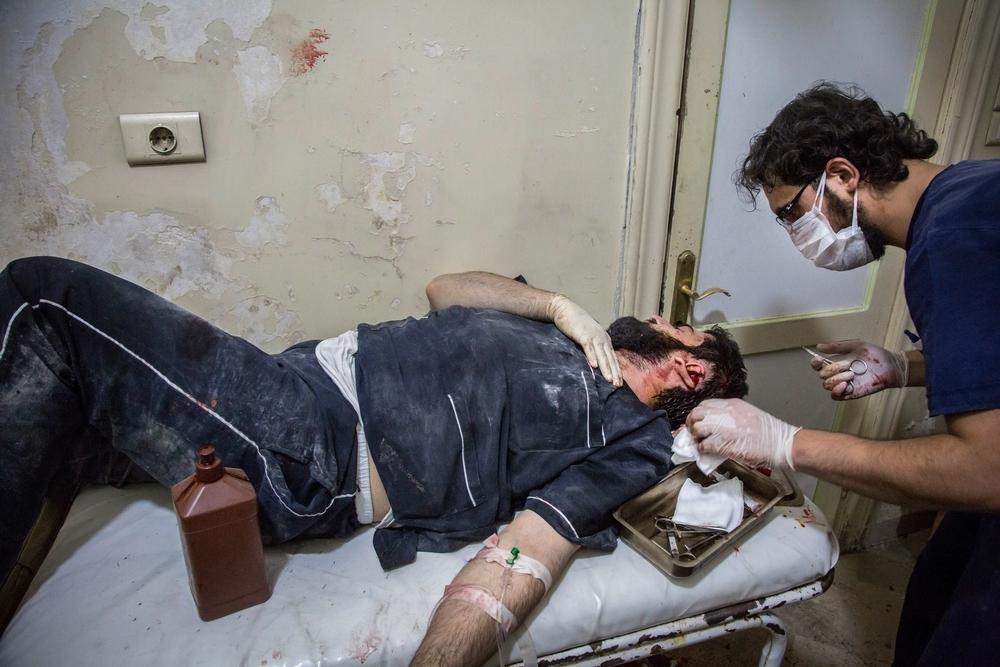 Doctors in east Aleppo are working in extraordinarily difficult circumstances. Along with shortages of health staff, fuel, drugs and medical supplies are also scarce in the northern Syrian city.

As they treat the wounded, their own hospitals have been hit by airstrikes. Each of the eight hospitals that were functioning before the siege have been hit, many of them multiple times, with 27 strikes on hospitals recorded in four months. But in almost every case, the damaged building has been cleared of debris, patched up and reopened within a matter of days.

The challenges of working under siege are enormous, but even under heavy bombardment, east Aleppo’s health staff have found ways to keep hospitals open and provide patients with medical care.

"We are on the verge of finishing the last of our supplies and, once this happens, we will be facing an acute medical shortage, especially with medicines for chronic diseases"
Mahmoud Abu Hozaifapharmacy manager, east aleppo

There are no more than 32 doctors in east Aleppo for an estimated population of 250,000, roughly one doctor for 7,812 people. In response, doctors often work shifts at multiple hospitals and health centres, so that their specialist skills – whether in paediatrics, obstetrics or surgery – are available to as many patients as possible.

Assistant doctors nearing the end of their training have also boosted the numbers of hospital staff. Doctors tell us that when mass bombings result in large numbers of wounded arriving all at once, everyone in the hospital helps out, including caretakers and cleaners.

In the past three weeks, airstrikes have eased off, giving staff a chance to recharge after an intense period in which more than 2,000 people were injured and almost 500 people died, and to prepare for any future intense periods of ground fighting, airstrikes or indiscriminate bombardment. “Now the exhausted doctors are taking the opportunity to have a rest,” says Patricia Garcia Peinado, MSF field coordinator.

In the meantime, east Aleppo’s medical staff continue to provide the best medical care they can in some of the most difficult circumstances imaginable.

Karam Almasri/MSF
Patient lies on a hospital floor after being injured in the leg by shrapnel from cluster bombs while queuing up to buy yoghurt in the Bustan Al Kasr neighbourhood of east Aleppo. Doctors said he needed surgery or a cast, but as his injury was less severe than many of the 60 other wounded people needing attention, he had to wait his turn.

Medicines and medical supplies are in short supply. In the months before the siege, hospital managers stockpiled supplies of drugs and other essentials, with the help of various organisations, including MSF, which has been sending regular three-monthly shipments of supplies to east Aleppo’s hospitals for the past two years.

Last April, a number of international organisations made an emergency delivery in case of possible besiegement. “This included essential drugs, such as antibiotics and painkillers,” says MSF medical coordinator Sara Ferrer Roura, “but we also sent in complex medical instruments, lifesaving equipment such as ventilators and incubators, and logistical equipment including generators to keep the electricity running during power cuts.”

During a brief window in August, when the siege was broken, MSF sent in 128 tonnes of supplies, sufficient to last east Aleppo’s hospitals until October. “Six of the trucks had to turn back, because the bombing restarted, but 85 percent of the supplies got through,” says Eduardo Yanez, MSF logistics manager. “Up to now the hospitals are still using those stocks – though they must be starting to run out.”

Karam Almasri/MSF
A child walks past a tea kettle heating on a wood fire in an empty market street in Al Shaar district, east Aleppo.

These supplies are likely to have been depleted quicker than usual, with the high numbers of wounded patients. And however carefully the hospitals are rationing drugs and other medical supplies, they cannot last indefinitely. There are currently no drugs to treat cancer, tuberculosis or hepatitis, and many other drugs will reportedly run out soon.

“We are on the verge of finishing the last of our supplies and, once this happens, we will be facing an acute medical shortage, especially with medicines for chronic diseases,” says Mahmoud Abu Hozaifa, manager of a pharmacy in east Aleppo. “But even finding painkillers is a challenge.”

Hospitals urgently need to be resupplied. As soon as it is possible and security conditions allow it, MSF is ready to send in more aid. “We have already positioned in the area enough drugs to supply 12 medical facilities in east Aleppo – eight hospitals and four health centres,” says Eduardo Yanez, whose team is on standby.

Hospitals have been forced to move underground to protect staff and patients from airstrikes. With the higher floors of hospital buildings abandoned, and emergency rooms, operating theatres and intensive care units shifted down into basements, there has been a significant reduction in the number of beds available for patients.

Hospital staff have dealt with this by prioritising the most urgent cases, and setting up beds for post-operative care in nearby houses. Patients, meanwhile, are opting to spend as little time as possible in hospitals. “Women have a caesarean and are out within a few hours,” says Sara Ferrer Roura. Many people prefer to visit local health centres, which are closer to their homes and have been hit less often by airstrikes.

Karam Almasri/MSF
Nurse checks on 11-year-old Mustafa, who has shrapnel wounds to his head and body after airstrikes on Al Maadi neighbourhood in east Aleppo in early October 2016. As a result of his injuries, Mustafa is suffering from neurological problems, including epileptic seizures, has lost awareness of his surroundings and can no longer speak.

East Aleppo has been without electricity for months, and hospitals rely on generators to supply them with power for lighting and to run essential equipment such as life support machines and ventilators. But generators require fuel, which is increasingly hard to get hold of in the besieged area.

In response, hospital staff are carefully rationing the fuel they use, running generators for just a few hours each day, or only when power is urgently needed. “They only run generators when they really need them for an operation, so saving fuel,” says Patricia Garcia Peinado. “They are incredibly adaptable, and are learning how to work under besiegement.”

Prior to the siege, MSF had been providing drugs, medical supplies and equipment every three months to eight hospitals, six health centres, eight first-aid posts, a blood bank and an ambulance service in east Aleppo. Since August, no deliveries of aid have been possible.

FIND OUT MORE ABOUT OUR WORK IN SYRIA