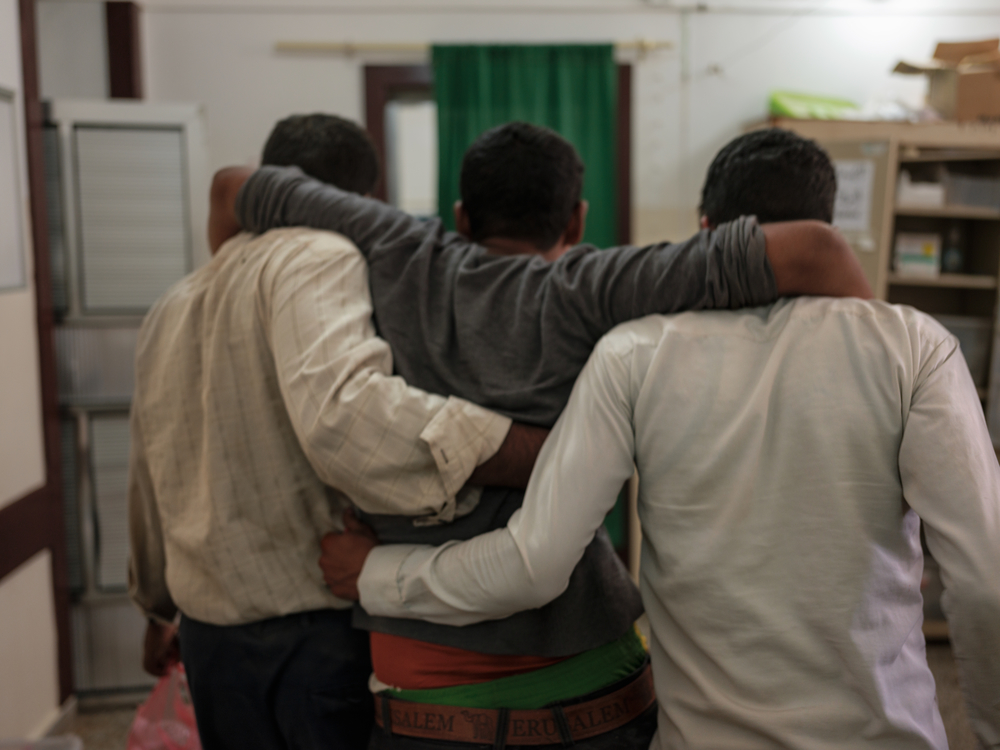 Yemen: "Governments are bombing hospitals with one hand and rebuilding them with the other"

Alex Dunne - an Irish humanitarian affairs officer - is in Yemen, where the brutal and under-reported conflict has collapsed the healthcare system. From patients with long-term illness to the war-wounded, millions of people are now at risk.

Some days, as I get ready to go to work here in Sana’a, I hear the deep drone sound of fighter jets from the Saudi-Emirati Led Coalition fly overhead.

While I make my coffee and plan for the workday ahead, the pilots are busy with their own morning routine: slicing through the sky above my head and often dropping the bombs that shake the ground beneath my feet.

Since the escalation of the current conflict in 2015, MSF medical facilities have been hit by airstrikes several times, with deadly and life changing consequences for patients, staff, and the communities which depend on the services.

MSF staff have been detained and shot at. An explosive device has been planted in one of our hospitals, and in perhaps the most egregious attack, armed men entered an MSF supported hospital and shot at a patient while he was lying on the operating table. Miraculously he survived.

Recently, we took the difficult decision to close one of our projects in the governorate of Ad Dhale, southern Yemen.

The decision was taken after a string of security issues, which culminated in a targeted attack on our staff house and a subsequent attack on our supported hospital several days after.

"Since fighting began, the public health system in Yemen has essentially collapsed. Public medical facilities have an extremely limited supply of medicines, and salaries for medical staff have largely not been paid since August 2016."
Alex DunneMSF humanitarian affairs officer

Far from being unique, these incidents are simply further examples of the most vulnerable populations in Yemen being denied the lifesaving aid they need.

A brutal and under-reported conflict

MSF significantly increased its work in Yemen at escalation of the conflict.

As of today, we have treated some 110,000 patients for Cholera, delivered nearly 60,000 babies and provided medical care to over 800,000 emergency room patients.

We have been responding to the needs of the population as best as we can but the medical humanitarian gap that exits in the country is huge – even in comparison to other conflicts to which we have responded.

Working right across the country – and on both sides of frontlines – the medical concerns we see are either a direct result, or a consequence of this brutal and under-reported conflict.

Since fighting began, the public health system in Yemen has essentially collapsed. Public medical facilities have an extremely limited supply of medicines, and salaries for medical staff have largely not been paid since August 2016.

It is difficult to comprehend the scale of the crisis, but picture the Health Service Executive (Ireland’s public healthcare provider) unable to pay its staff for nearly three years and you can better imagine the current state of medical care in Yemen. And healthcare is only one of the essential services upon which the population depends for survival that has been degraded by the conflict.

This degradation is having a devastating impact on the health of Yemen’s 27 million people and is a result of Yemen’s ongoing conflict, embargo, attacks against medical facilities and an economy pushed into freefall – from both internal and external forces.

"Bombing hospitals with one hand and writing the cheque to rebuild them with the other distorts the perception – and security – of aid and independent humanitarian organisations in Yemen."

As a result, the medical consequences of the conflict we witness in our hospitals are not ordinary – but they are relatively predictable in such a situation.

We see a resurgence in deadly vaccine-preventable diseases (cholera, measles and diphtheria), a monumental gap in maternal and paediatric care, acute hunger, and an urgent need for an increase in care for war-wounded patients.

This is without even considering the lack of capacity to adequately treat non-communicable and chronic illnesses requiring treatment such as cancer, diabetes and dialysis. MSF can only monitor and treat these diseases as best we can, all across the country.

Although these outcomes are comparable to what we witness working in other conflict zones, the scale of their impact is further compounded by the practical disregard of International Humanitarian Law by all parties to the conflict here in Yemen.

There needs to be a massive increase in quality, independent, primary healthcare in Yemen. We have been calling for this over the past three years, yet we still do not witness the type of improvement needed on the ground.

Yemen: Providing hope in the crossfire >

What we do see is that humanitarian organisations are facing obstructions in their work from all parties and at all levels.

Organisations operating in Yemen are often constrained by “administrative” hurdles in assessing locations and providing relief to many parts of Yemen. This results in an inability to adequately monitor and assess the impact of their programmes across the country.

Every day, MSF faces these challenges too – in the import of lifesaving drugs, the securing of exit and entry visas and in ensuring the safe movements our medical humanitarian staff.

Nevertheless, in spite of these risks, we are doing all we can to provide life-saving care in the country.

Another dilemma faced in Yemen is that the main parties in the conflict, Saudi Arabia, UAE, USA and the UK are also the main donors of humanitarian assistance via the UN – providing some 71% of the relief assistance in 2018.

Bombing hospitals with one hand and writing the cheque to rebuild them with the other distorts the perception – and security – of aid and independent humanitarian organisations in Yemen like ourselves.

States not linked to this conflict should further increase their humanitarian funding to respond to this crisis.

Our life-saving work in Yemen >