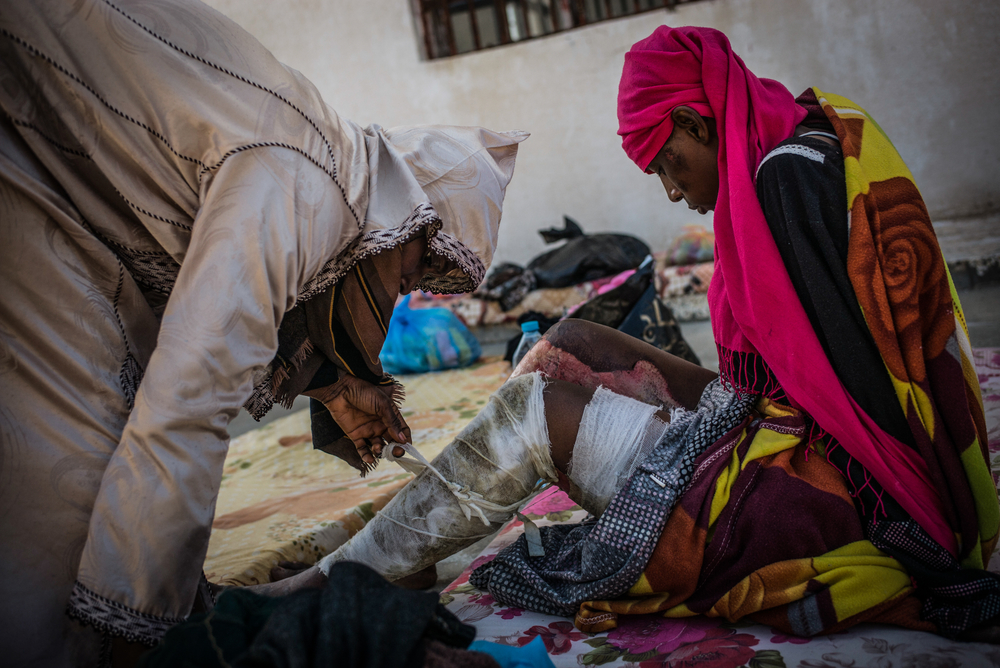 Libya: UK support for arbitrary detention of refugees, asylum-seekers and migrants must stop

Médecins Sans Frontières/Doctors Without Borders (MSF) is calling on the UK Government to end its support for the arbitrary detention of refugees, asylum-seekers and migrants in Libya.

For more than a year, the international humanitarian organisation has been providing medical care to men, women and children held inside Tripoli detention centres in inhumane conditions.

Medical teams treat more than a thousand detainees every month for respiratory tract infections, acute watery diarrhoea, infestations of scabies and lice, and urinary tract infections. These diseases are directly caused or aggravated by detention conditions.

Many detention centres are dangerously overcrowded and there is little natural light or ventilation. Food shortages have led to adults suffering from acute malnutrition, with some patients needing urgent hospitalisation.

Children, babies and pregnant women are held in detention centres too. The youngest patient seen by MSF medics was only five hours old and had been born the previous night in the detention centre.

Being held in such appalling conditions has a dangerous impact on a woman’s health and her chance of survival if she experiences complications during her pregnancy or delivery. Women regularly give birth in detention without medical assistance. MSF has met many women in the early stages of pregnancy – despite having been detained for several months.

Our medics regularly hear from those being held in detention centres that they were brought there by the Libyan coastguard, which receives considerable financial support from UK taxpayers and was last week publicly endorsed by British Foreign Secretary, Boris Johnson, MP.

Guillaume Binet/Myop
A man sits and waits in Abu Salim detention centre. Detainees spend days and months in Libyan detention centres, without knowing when they will be released.

“Detainees are stripped of any human dignity, suffer ill-treatment and lack access to medical care,” says Dr Sibylle Sang, a medical advisor for MSF. “Every day we see how much unnecessary harm is being caused by detaining people in these conditions, but there is only so much we can do to ease the suffering.”

With no rule of law in Libya, the detention system is completely unregulated.  Basic standards and safeguards to prevent torture, sexual violence and ill-treatment are not respected.

Those detained are at the mercy of heavily armed guards who lack adequate training, have no one to hold them to account and reportedly often do not receive a regular salary.

The reality is that UK policy is helping to trap thousands of people in Libya in these conditions. The Foreign Secretary can no longer remain silent on this issue.
VICKIE HAWKINSMSF UK EXECUTIVE DIRECTOR

New detention centres emerge overnight with detainees often exploited as forced labour in their construction. Detention centres shut down just as suddenly, with the fate of people detained there unknown.

With no formal registration or proper record-keeping in place, once people are inside a detention centre there is no way to track what happens to them. Some detainees are held for prolonged periods of time; others are transferred between different detention centres, moved to undisclosed locations or disappear overnight.

Many patients simply vanish without a trace. People are detained without any way to access legal or consular support or knowing if and when their detention will end.

This is a system to which the UK Government is contributing, working with European and Libyan partners to create a buffer zone for Europe. However, increased funding alone is not the solution to alleviating the suffering of refugees and migrants being held in detention centres.

A narrow focus on improving conditions of detention, while turning a blind eye to the complex reality of the current situation in Libya, risks legitimising and perpetuating a system in which people are detained arbitrarily, abused and exploited.

MSF UK Executive Director, Vickie Hawkins, who has recently returned from Libya said, “The British Government is happy to sweep the appalling human cost of its deterrence policies on migration under the carpet – anything to make this someone else’s problem.

"Many of those held in these centres were working and living in Libya at the time of their detention, with no intention of coming to Europe. All those being held have no access to information about where they are, why they’re being detained or what will happen to them."

"MSF medics have heard horrific stories and treated the violence-related injuries of those who have been in detention: broken bones, torture scars and women pregnant as a result of rape."

“The reality is that UK policy is helping to trap thousands of people in Libya in these conditions. The Foreign Secretary can no longer remain silent on this issue – he has serious questions to answer on the harm caused by Britain’s support for this abusive system and the role that it plays trapping people in Libya.”

Médecins Sans Frontières calls for an end to UK-supported arbitrary detention of refugees, asylum-seekers and migrants in Libya.

OUR WORK IN LIBYa >