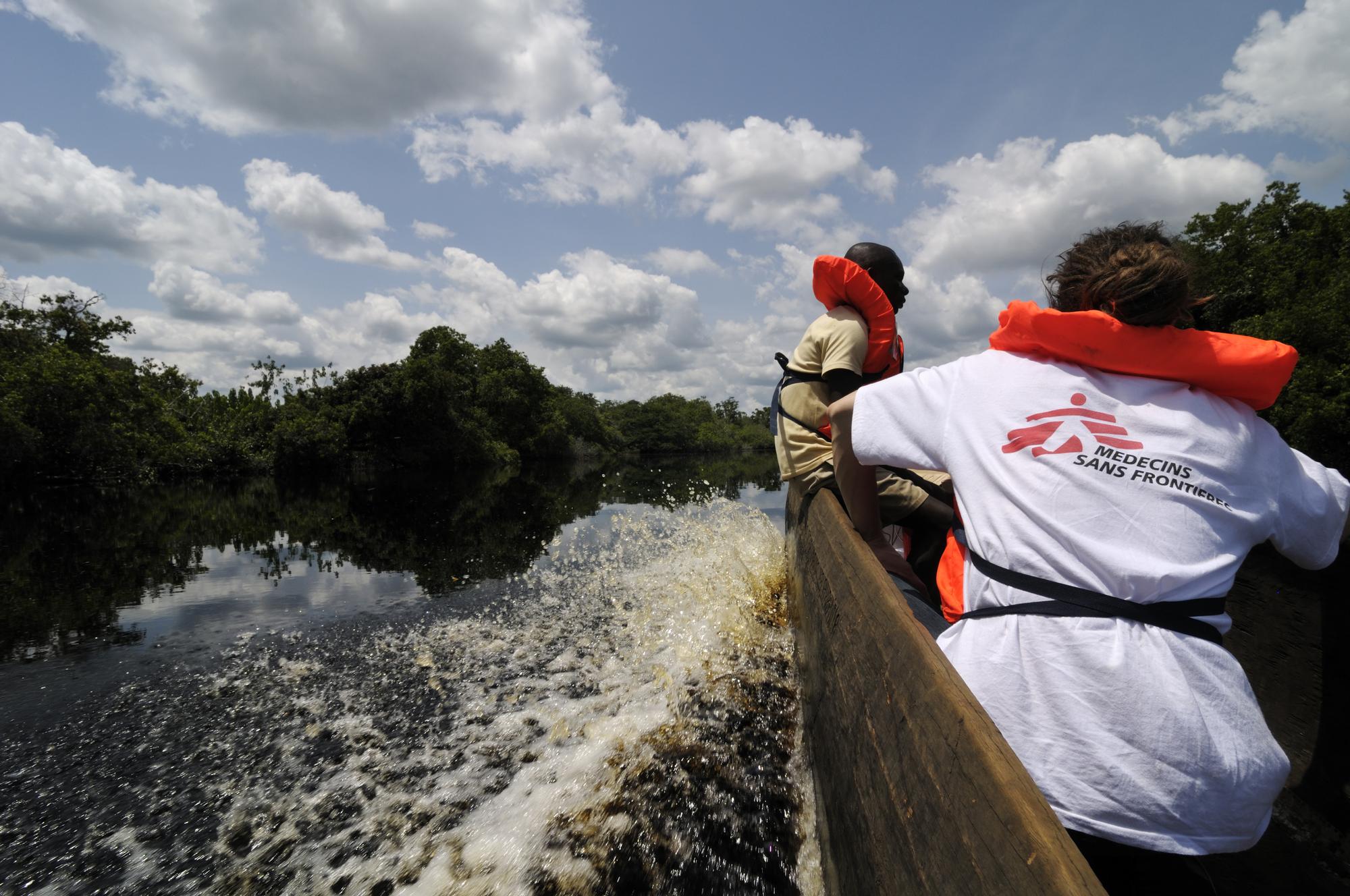 How easy is it to adjust to life after MSF?

Sure, I had a great time in Europe, but there was also a darker side that the Facebook album somehow doesn't show. The feeling of emptiness, of panic about the future and of lack of purpose in those few days off I was granted.

In the Médecins Sans Frontières/Doctors Without Borders (MSF) project I work in, it's the opposite.

My to-do list is never shorter than four A4 pages - and strange noises, unexpected incidents or visitors often give me a reason to get up way earlier than the 6am alarm. Most days I'm awake and ready to go at 4.30am.

A post shared by Médecins Sans Frontières (MSF) (@doctorswithoutborders) on Dec 4, 2016 at 3:11am PST

Plus, people need me. All the time. My office door should be a rotating one, the number of people who come in and out every few minutes. The other week, I was visited by five different people while trying to type out one single sentence in an email.

And I love it.

I love the interaction with different people on different issues and having to solve problems that would sound entirely ridiculous in "the real world" ("A woman's just given birth in the field next to our base, can we send the car out to take her to the hospital?"..."People are fleeing from the camp we're in, should we evacuate?"..."This armed group leader can't meet you now today, can we rearrange for Saturday?").

I love the sense that I am being useful and I am necessary. Sure, I'm easily replaced by any other project coordinator as soon as my mission ends or I go on leave, but for those seven days a week for those few months, while I am in a project with responsibilities and a title, I am a somebody - and I have a cause.

This sense of self that the MSF world gives, makes holiday and downtime a potentially scary, empty place.

The months between my last two missions hit me the hardest. I was kind of stuck in this limbo between working and having a "raison d'etre", and being with friends and family, fitting in with their work schedule and spending all my annual earnings in my home town in just a few months.

It's either one or the other, never both: either work and a purpose, or time with life-long friends and family. It's never work in the day and family and friends at weekends and evenings. You also spend your time seeing other people your age with proper jobs, grown-up homes and families; panic starts to set in about your own future.

I genuinely started questioning the meaning of life and my own reason for being.

"I really want to relate, but its becoming harder to"

This is not something people talk openly about or write about often, but it's very real.

As a female especially, you are forced at a certain point in your life to choose in this sector (just like in many others): career or family? Most of the places MSF work are not baby-friendly. Rocking up with a toddler to a war-torn country is not something many people want to do or something MSF would allow you to do.

"[As time goes by] you have fewer and fewer things left in common with your friends and family: 'I got a great bargain in Debenhams the other day- new curtains for half the price.'"
emily gilbert

Although there are a few family postings in some of the more stable countries MSF work in, these are hard to come by and seem to be occupied mainly by people who have dedicated most of their lives to the cause and who have been on the planet longer than me.

I wonder how many other people feel like this. I know I'm not the only one.

Trapped in a world of to-ing and fro-ing, no solid base, and a network of family and friends from whose contact lists you gradually drop as you have less and less time to spend with them and when you do, you have fewer and fewer things left in common: "I got a great bargain in Debenhams the other day- new curtains for half the price."

I really want to be able to relate, but it's becoming harder to.

I think about the people we work with who have very few worldly possessions and barely, if any, access to clean drinking water. And I really don't want to be that person who trivialises other people's lives and problems or makes their reality seem less important than anyone else's as it's not -  they're just different and a reflection of how unequal the world is.

I also tried the life of home-decor and Ikea trips a couple of years ago and I loved it. I too got a great bargain at DFS on a mocha (yes, not just "brown") sofa (30 percent off in the Winter sale!) and was entirely drawn into and enthusiastic about discussions of what Mable down the street said last week to the neighbour; but at some point the world of MSF started calling again and it was time to go.

Stella Evangelidou
An MSF member of staff looks out across the landscape, DRC.

A few years ago I was quite happy to leave and be thrown back into a project, with often strong, but transient friendships, where discussions are instead about the national politics, the latest mystery patient case in the hospital and, well, poop.

With MSF, working with doctors and nurses and in conditions where water and sanitation is often very basic, and where our mandated work revolves around health, talking about poop at least once a day is unavoidable... (OK, three times a day. Over breakfast, lunch and dinner.)

The life I wanted

I can also tell I'm becoming alien to people at home. When I first started this work and people would ask me when I went home, "How was it?", I used to try to go into streams of detail about what life in the project was like, movements of armed groups, patients etc.

I soon learnt, however, that actually what I thought was massively interesting to people was actually too far removed from their reality for them to want to hear more than a couple of sentences. After years of trying to force the cause, apart from the exceptions, I now usually settle for "yeh, it was good".

I created this life, I know. And ten years ago this is exactly the life I wanted.

Early 20s me would look at current me and beam with pride. I realise I am lucky too. Current me would tell early-20s me to stop stressing about finding a way into this career and that it will all work out.

I used to hugely envy the delegates that walked into our office in London when I worked for another humanitarian organisation in their HQ. I used to brief them on things I knew so little about and inside was secretly wishing I was them. Now I am them and what I hadn't taken into consideration is that at a certain point it becomes hard to get out.

There aren't so many options for "generalist" project managers in the humanitarian world when they want to reintegrate back home.

Some people get jobs in NGO HQ offices, though salaries are not usually supportive of a family in a city like London. I've heard of quite a few "humanitarians" who leave this work entirely and buy farms in some countryside in Europe, growing vegetables and making wine. Not such a bad plan...

Emily Gilbert
Emily and an MSF Land Cruiser in DRC.

I love my job and I love MSF, and I hope it stays a part of my life for many years to come, just sometimes I wish it would be part of my life in a form more like a cousin, or a neighbour, rather than a controlling mother who takes over every aspect of my daily living (and sleeping).

Someone that you can pop in and see for a nice wholesome chat over a home-made roast dinner at a time that suits you, as opposed to someone who wants a say in every tiny little thing that you do.

In the project, as a coordinator, I have to have my radio with me and be available 24/7. I can't even go to the bathroom in peace.

I can't count the number of times I have been disturbed in the toilet or in the night by the crackle of the radio calling me, or a phone call from someone in the mountains who finally has signal and needs to update me urgently on the latest security information. My friend once compared it to raising her son (!)

The other night I took a five-minute shower (with a bucket of course, not an actual shower) and as I was getting dressed I heard a whole lot of commotion directly outside our base, quite near to my bedroom, and simultaneously was being called by various people over the radio.

Should I go outside in only a towel, which would be entirely culturally inappropriate and not something I would like to flee in if I had to, or should I respond quickly on the radio and delay a couple of minutes to put my trousers and shirt on?

Emily Gilbert
Emily raises the MSF flag at our mobile clinic in DRC.

As there was another member of the international staff outside, who I knew could deal with security issues, I chose to get dressed and joined the team a few minutes later when the commotion had calmed down and turned out to be nothing to worry about.

As I said though, I do love it, but I'm hoping one day I can find a balance between doing this work that I love and also having a strong network of friends and family, and a stable home where I am allowed to go outside after 6pm to just about wherever I want.

But until then, I better get back to DRC...