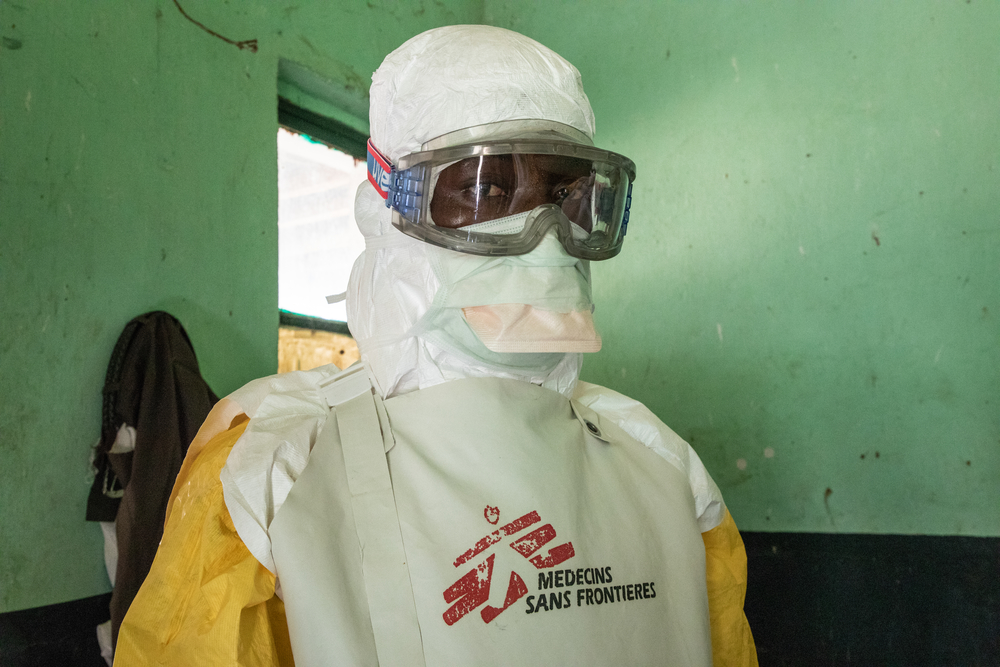 Fighting Ebola in DRC: A race against time

Paul Jawor is a British water and sanitation specialist who has just returned from Equateur province in Democratic Republic of Congo (DRC). He explains the challenges faced by Médecins Sans Frontières / Doctors Without Borders (MSF) teams working in the remote village of Iboko – the frontline of the ongoing Ebola outbreak.

We arrived in Mbandaka city by plane on the morning of 20 May.

Mbandaka is the main city of the province where the current Ebola outbreak has been declared. Some cases have been reported in the town and MSF has set up an Ebola treatment centre in response.

However, our team’s job was to go and start work in and around Iboko, a very remote village about 120km south of Mbandaka, where a patient had just been confirmed as infected with the Ebola virus.

"It was dark… there wasn’t enough light to enter the house safely without the risk of tearing my protection suit."
Paul JaworMSF water and sanitation specialist

The race to reach Iboko

There was no helicopter available for two days, so we hit the road an hour after landing with three rented cars full of all the provisions and materials we could find.

With an outbreak like this, it’s a race against time. One Ebola patient with symptoms can infect several people every day.

The best way to contain the disease is to put all measures in place as soon as possible.  And so, the race was on.

It was a long journey and we arrived in Itipo – a village on the way to Iboko which has also been affected by the outbreak – at night, after having suffered mechanical problems and having had to repair numerous broken wooden bridges along the way.

One of our vehicles even drove off the edge of a bridge. In the dark, it took us what seemed like hours to put it back on track.

After spending the night in tents on the terrace of a nunnery, we set off again for Iboko, a further two to three hours’ drive away.

“We could see they were very scared of the disease”

Iboko is a village mainly made up of grass huts with a church in the middle. It has a functioning hospital that serves a large area and numerous surrounding villages.

My colleagues met with the community and its leaders to explain what we were coming to do and to raise awareness about Ebola; how it can be transmitted and the measures to take to prevent its spread.

The villagers welcomed us, but we could see they were very scared of the disease.

I hired some local staff and we focused on one of the first priorities: building an isolation ward, along with a latrine, shower room, dressing and undressing rooms, and a waste management area. This was done in a deserted building with five rooms, near the health centre.

In 24 hours it was ready to receive patients with suspected Ebola, who would be tested for the virus and receive initial care.

Any confirmed cases would be, for now, transferred to an Ebola treatment centre in the town of Bikoro.

Over the following days, we planned and started building a 13-bed centre that could be extended to 26 beds if needed. This meant that patients with confirmed Ebola could be treated in Iboko itself.

Building an Ebola treatment centre is quite complex. Everything has to be built meticulously in order to avoid cross-contamination between patients – both suspected and confirmed cases – healthcare workers, their families, and the population living nearby.

One of the main challenges we face in this outbreak is that, despite our efforts to raise awareness in the community, people with Ebola-like symptoms don’t want to come and be tested.

Some of them also live far away from the treatment centre and prefer to stay at home. But this can be dangerous for the people caring for them. They could easily become infected and be the next suspected case.

One woman confirmed as having Ebola died in a village called Bobale, 19 km from Iboko, after she had chosen to stay at home.

We were quickly notified and an MSF colleague and I, along with a member of the Red Cross, travelled to Bobale. Her body would have been very infectious at that moment, so we wanted to make sure she was taken care of with the necessary precautions while trying to respect local customs.

The dangers of disinfection

Night was falling by the time we arrived in Bobale.

I needed to disinfect the woman’s house and place her in a safe body bag which would go into a sealed coffin the community had made.

But it was dark… there wasn’t enough light to enter the house safely without the risk of tearing my protection suit on sharp objects. So, we decided to postpone until the next morning.

It took me an hour, sweating in my protection suit, to spray the house and disinfect the woman’s body in a respectful way, under the eyes of her husband who was also wearing some protection.

Then I collected all the clothes, sheets and other potentially contaminated materials into a bag that I sprayed with chlorine. That was, in turn, put into another bag, sprayed again, and put into another bag. It was then taken back to our treatment centre in Iboko and burnt.

In order to avoid spreading the disease, we are taking the maximum number of precautions.

The fight against Ebola

I left DRC a few days ago. Since then, other MSF colleagues have joined the fight against Ebola.

The main challenge will be convincing people to seek care at the treatment centres, especially in remote areas like Iboko.

We must spare no effort to ensure that communities know how to protect themselves from the spread of this disease.

Find out more about EbolA >