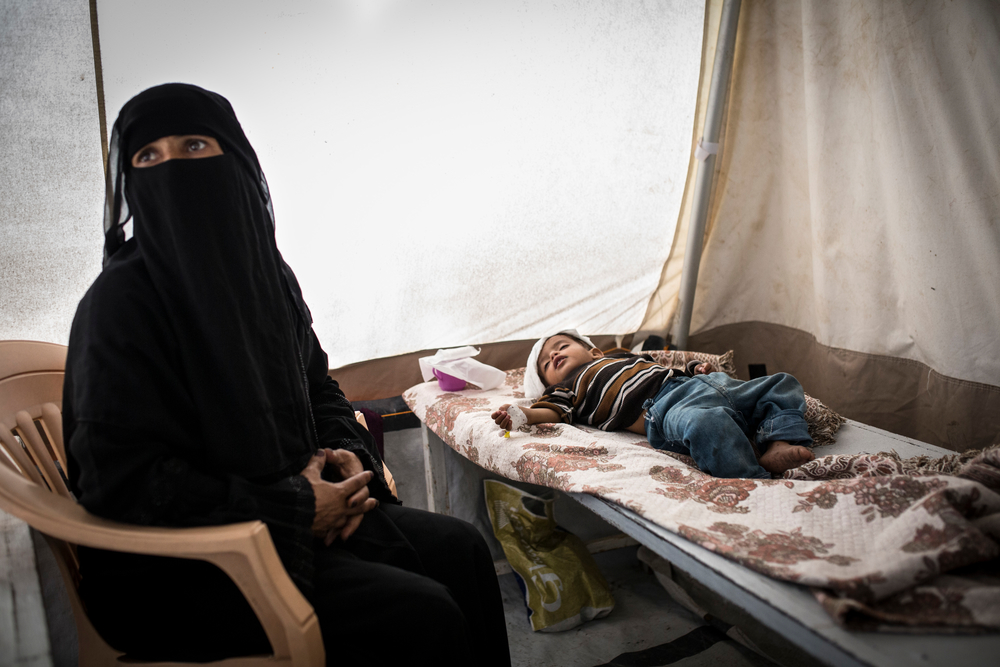 Cholera outbreak in Yemen: "Ali is fighting for his life"

Antonia is a nurse in our emergency team. In July this year, she was deployed to Yemen to tackle the cholera outbreak.

"I try to insert the needle into the arm of 10-year-old Ali Aahme. He has had diarrhoea and vomiting since yesterday. He is extremely dehydrated.

His eyes are black-edged and sunken, half open and twisted, hardly any response to stimulation. He has cold hands and feet despite the fact that it’s 42 degrees in the shade, his pulse is racing and is difficult to measure.

He breathes quickly. His veins have already collapsed and so this is not an easy task at all. I call my Yemeni colleagues, they have more experience in this kind of situation and set about trying to find a suitable vein for the IV fluids.

We all know that Ali is fighting for his life, and that his survival is dependent on whether or not we find a vein for the fluids.

"At the end of my deployment, more than 400 patients were treated per day. The epidemic is out of control."
antonia zempmsf emergency nurse

Together we manage to place two needles, and now press the fluids into Ali's exhausted body. Its circulation sucks the much-needed liquid like a sponge. Fortunately, improvement can be seen after 20 minutes.

Ali begins to stir and moan. His mother cries with exhaustion, fear, and relief. She thanks us exuberantly. I need a moment to breathe and deal with my emotions while my colleagues are already busy with the next patient, inserting more needles and helping patients drink oral rehydration solution (ORS).

We must be faster in supplying our patients with fluids than the cholera is at dehydrating them through acute diarrhoea and vomiting. Faster!

At the beginning of May, we opened a cholera treatment centre opposite the MSF hospital in Abs, in the west of Yemen. The building is a primary school, whose pupils are currently on vacation.

At the beginning of the epidemic, when the number of patients was still predictable, we were able to treat and isolate them in the hospital. But day by day the number increased and exhausted the capacity of the hospital.

However, the epidemic has spread so rapidly that the capacity of the 50 beds of the newly opened treatment centre is by far exhausted after the first week. For a few days, we are no longer surprised when we register more than 200 patients a day.

At the end of my deployment, more than 400 patients were treated per day. The epidemic is out of control.

More help is urgently required to fight against it. We try to meet the needs and rearrange more and more classrooms so that they can be used as sick rooms. But space is probably the easiest problem to solve.

More patients mean more drugs, more staff, more water, more beds, more toilets are needed. This takes time, even in emergency high-speed mode. In the coordination team, we are planning ahead, but the exploding numbers overwhelm us.

It is not easy to keep a cool head

Maintaining a cool head is not an easy task, not forgetting the already mentioned 42 degrees in the shade and the culturally obligatory headscarf and black long Abaya, a traditional Islamic garment for women.

As a medical team leader, I try to write shift plans together with my team for staff members who are not even recruited yet.

I try to organise training sessions and order medication in time so that we do not suddenly stand empty-handed and the whole market is exhausted.

We work to guarantee that each individual patient is properly registered so that epidemiological data can be gathered and to assist surrounding health centres so that they are also able to record those affected.

All this would be one thing in a European industrial state. We are talking about Yemen. A developing country where a bloody war has been going on for over two years. The suffering of the population is indescribable.

Their everyday lives are dominated by fear, hunger, death and disease. Even if you try to imagine living in Yemen, you are not capable of it.

The health system has already been extremely weakened by the war, with fewer than 50 percent of health structures still functioning. Staff have not been paid for almost a year. Medicines are scarce due to air and sea blocks.

If a patient arrives in our treatment centre at such an advanced state of dehydration that we cannot save them, and you ask why the family did not come earlier, the answer is often that there was no money for transport available.

Or a bomb has made the path impassable. Or the fear of death while you are on the road expecting another air attack, means you would rather stay with your family.

This is everyday life for the people here. Every story takes my breath away.

Due to the dehydration of the body, many pregnant women lose their children before birth. The bodies of people who have died must be specially treated so that they do not infect people during burial.

When I had to wash a seven- or nine-month stillbirth, the worst thing is not that there is a perfect, small, but lifeless body in front of me. The worst of it was that I thought secretly that it might be better for the little person, because its future would have been one of the most uncertain and difficult in the world.

My greatest respect is with my Yemeni workforce. In spite of all this, they are motivated every day to work and fight against the suffering which they themselves are exposed to."