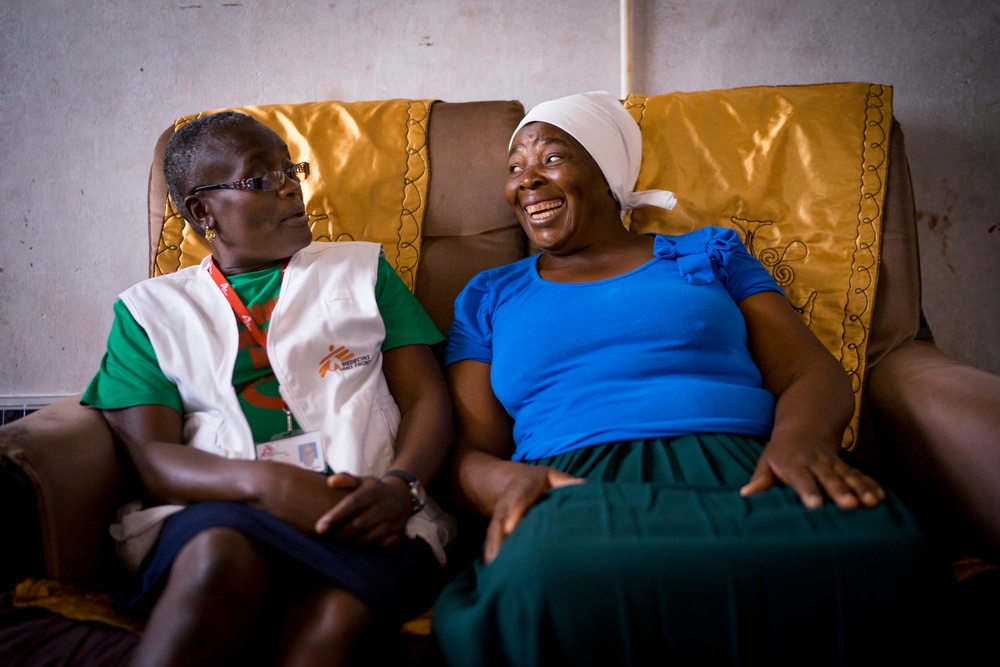 When Magaret Muza heard that her local hospital was offering screenings to detect early signs of cervical cancer, her mind flashed to her eldest daughter, who died of the disease.

“We found out too late because she didn’t tell us,” says Magaret, who booked a screening for herself immediately at Chimombe rural hospital, one of six health centres now offering cervical cancer prevention services in Gutu district, Zimbabwe.

On the day of her appointment, Magaret walked for two hours along the dusty gravel track to the hospital.

The open-air corridors bustled with queues of women and babies.

Once Margaret was lying comfortably on the bed in the screening room, the nurse explained the simple process, which involves applying dilute acetic acid – a component of ordinary vinegar – to the cervix, while a camera projects close-up images onto a monitor nearby.

Unlike Pap smears, this technique gives an instant diagnosis. Within minutes, white patches around the mouth of the cervix were visible on the screen.

The nurse recognised them immediately as early pre-cancerous lesions, patches of infected cells that, if left untreated, could develop over time into aggressive cancer.

At first, Magaret was frightened that she too had cancer, instantly knowing she could never afford the long, expensive treatment in the capital, Harare.

But the nurse explained that she could have a five-minute cryotherapy treatment, which uses liquid nitrous oxide to freeze the lesions and stop them developing further.

The procedure would be painless, the nurse said, and would heal quickly.

Magaret would even be able to walk back home afterwards.

The importance of early screening

Magaret is one of many women in sub-Saharan Africa who face high risks of dying from cervical cancer.

Here the chances of getting diagnosed and treated for cancer are extremely slim, unlike in developed countries which have highly funded, sophisticated cancer programmes.

In many developing countries, including Zimbabwe, the few available radiography and laboratory services are in big cities.

Without health insurance, the huge costs of biopsies, surgery and treatment mean that many women, especially in rural areas, forego diagnosis and treatment to die in silent agony.

This makes early screening and prevention of cervical cancer in developing countries all the more vital.

Florence Munyaradzi, aged 54, did not know she had cervical cancer until it was too late.

In January 2016, feeling weak and experiencing bleeding, she visited Gutu rural hospital in the same district for a screening and was referred for a biopsy to the nearest mission hospital several hours away.

People in her village lent her the money for the biopsy, but Florence was too weak to return for the results.

In July 2016, Médecins Sans Frontières/Doctors Without Borders (MSF) supported her to have a hysterectomy, but by January 2017 she was admitted to hospital with terminal cancer.

With so many Zimbabwean women missing out on screening and treatment and dying unnecessary deaths, MSF first started working with health ministry in 2014 to bring preventive screenings to Epworth polyclinic in Harare.

“Cervical cancer is a very dehumanising cancer,” says Severine Caluwaerts, MSF obstetrician-gynaecologist. “You might bleed a lot, you might become incontinent or be in great pain.

"For an emergency organisation, this programme might seem unusual, but it’s tragic that we are losing women to preventable diseases like cervical cancer when such effective treatments now exist.”

"It’s tragic that we are losing women to preventable diseases like cervical cancer when such effective treatments now exist.”
severine caluwaertsmsf obstetrician-gynaecologist

Women like Florence are the reason that we now support the health ministry in rural Gutu district, offering cancer screenings and on-the-spot cryotherapy for women attending five rural hospitals (with a sixth centre supported by UNFPA).

Women with more extensive lesions are referred to the capital, Harare, for Loop Electrosurgical Excision Procedure (LEEP), for which we organise their transport to and from Harare and cover all medical costs.

The project is a labour of love for MSF nurse mentors Sisters Tendai Chigura and Mercy Mandizvo, who have trained three nurses and one clinical officer to conduct screenings and perform cryotherapy in the six hospitals.

“We believe that screening and treating should be done in one visit if a women agrees, and the majority do,” says Tendai. “MSF wants to eventually see these preventive screenings brought into all HIV and family planning programmes for women.”

Alongside the nurses, Tendai and Mercy rolled up their sleeves to set up fully-equipped screening rooms in all six hospitals.

All women who visit the hospital are encouraged to come for a screening.

Melanie Wenger/COSMOS
Beauty, 36, and her husband Mr Chigouriemba, 28, talk with MSF Nurse Mentor Sister Tendai about the possibility of having a child before having her uterus removed.

Nurses run health education sessions in waiting areas, while health promoters travel to surrounding villages and visit women in their homes to increase awareness of cervical cancer and how to prevent it.

There is growing knowledge among women about the disease in Zimbabwe, but without proper information on the disease and how to access services, women can’t even begin to prevent the risks they face.

“There are a lot of misperceptions about cervical cancer," says Mercy. “Sometimes women are ashamed because it is sexually transmitted. The link with HIV also means there is stigma.”

Both Tendai and Mercy maintain close contact with the women diagnosed with more serious forms of cancer who need to be referred for treatment in the capital.

Protecting against the human papilloma virus

While thousands of women in rural Zimbabwe now have access to the screening and treatment of pre-cancerous lesions, the best way of stopping the disease from developing in the first place is to vaccinate girls against HPV before they become sexually active and are exposed to the virus.

MSF plans to support the health ministry in vaccinating more than 10,000 girls aged nine to 14 in Gutu district in 2017.

"It was an opportunity for me to get treatment and be cured."
margaret muzapatient

Six months after her screening and cryotherapy, Magaret came back for a follow-up appointment to see if it had been successful.

“They told me I had no lesions anymore,” says Magaret happily.

The outcome meant a huge celebration for her family, albeit tinged with sadness at her daughter’s absence.

“I was happy to learn I had these lesions," she says. "It was an opportunity for me to get treatment and be cured."