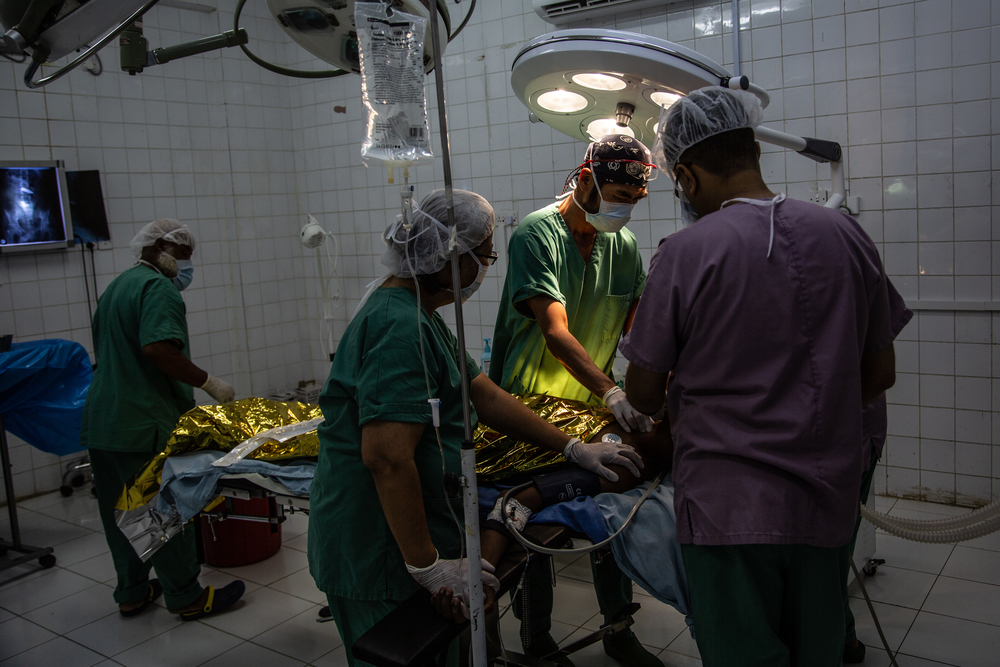 Yemen: "We quickly assembled the team to save her life"

Caroline Bwango is a London-based emergency doctor who recently returned from MSF’s mother and child hospital near Taiz in southwest Yemen.

I remember one young girl who was brought to us. She’d been out playing in the garden when she stepped on a landmine.

She arrived at the hospital with what we call "traumatic amputations", which means that she’d lost limbs through the sheer force of the explosion. She was nine-years-old and she’d lost both of her legs.

Her family had rushed her to us. She was still awake and she was still breathing. It was our job to arrest the bleeding, restore her blood supply, stabilise her as best we could and keep her alive so that we could transfer her to MSF’s surgical hospital.

We quickly assembled the team.

When the nine-year-old girl was brought to us, we had no warning. If we were in the UK, we’d have a pre-alert service, where the ambulance would call and say, "We’re coming in with such-and-such" and we’d have time to gather the team, allocate roles and mentally prepare for what was about to happen.

But in Yemen, the ambulance system is barely functioning. People are picked up from the scene and loaded onto whatever transport is available – pick-up trucks, vans, private cars, motorbikes – and transported, sometimes for many hours, to us.

As a result, we’re always prepped and we’re always on alert. We know what our roles are and who is going to do what when a situation like this happens.

There were six of us working on the girl. You start by quickly examining the patient from head to toe, checking airways, breathing and circulation, while others are working on the bleeding.

It’s always a frantic environment, but we stay calm and focused on what we’re doing. The girl was in great pain and was terrified, so we were also doing our best to soothe her and alleviate the pain.

Our job at this point is essentially damage control. We’re doing everything we can to stop the bleeding and to get her to the point where we can put her in a vehicle and rush her 20 minutes down the road for surgery.

I don’t know how long we worked on her, but we managed to stabilise her and get her to our surgical colleagues. They took care of her wounds and she survived. But she will live with a lifelong disability and faces a long road of rehabilitation. And all of this in a warzone.

Landmines are violent and indiscriminate.

There was one particularly terrible incident. Some children were out playing when they found a mine. They didn’t know what it was, so they picked it up and took it into the kitchen.

Just as the parents were investigating what it was, it blew up and killed the entire family.

Amid all the suffering, there were moments when you’d catch yourself smiling.

I remember one old man who hobbled into the hospital one day. When we asked him what was wrong, he told us that a camel had sat on him.

He’d been herding his camels down a hill and one of the camels had lost its footing and ended up sitting down backwards on him. He was a lovely guy in his 70s or 80s, proud to still be herding his camels. He seemed to think it was pretty funny as well.

We patched him up and sent him on his way. I remember thinking, that’s not something I’m ever likely to see in London.

I left my heart in Yemen. The patients that we treated and the Yemeni colleagues I worked with were amazing. Everybody you meet has been touched in some way by the war. But people get up and they keep going.

Staff would have family members killed and would go to the funeral in the morning and then turn up to work the late shift afterwards.

The dedication and the commitment of these people to serve their communities and to provide medical care was something to behold - it was humbling to work alongside them.

MSF is the only one providing free medical care in this area and each day was challenging and difficult. We had to make tough decisions and there were bad moments.

But I never once woke up in the morning thinking, "Oh no, I have to go to work". Just being able to lend my support, do my bit and provide medical care to people who really needed it was a privilege.