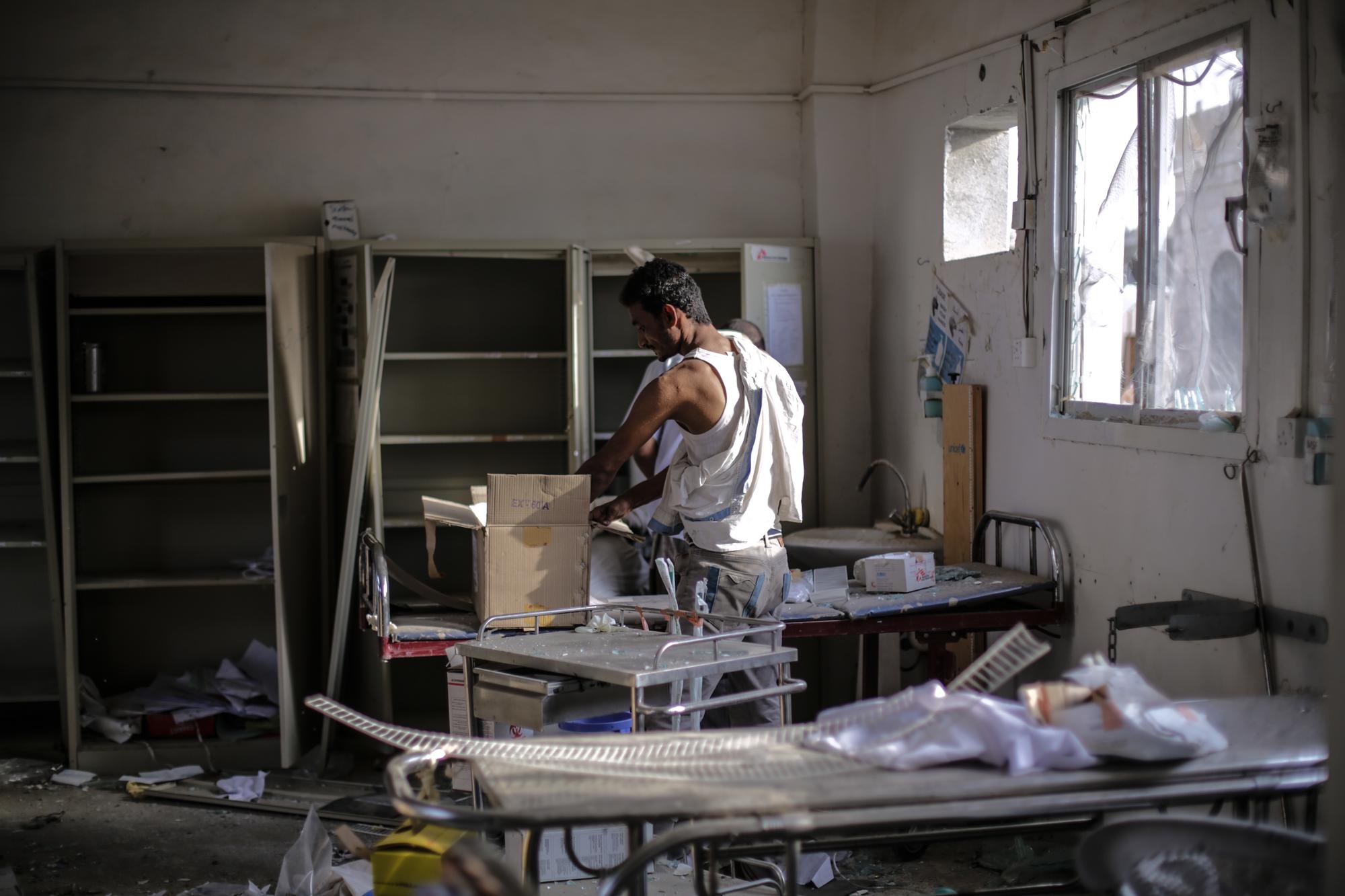 Yemen: "Airstrike in the hospital. Now!"

I´m in Yemen, wrapping up my last weeks of a three month assignment with Médecins Sans Frontières/Doctors Without Borders (MSF).

It's Monday afternoon and I am in the office, in the process of completing the pharmacy order. At the same time my colleagues, a doctor and the HR coordinator, are in the room next door, doing the last job interviews for staff for the new clinic for malnourished children. It’s due to open a week today.

The project I have been working in since the beginning of June is in Abs District, in north-western Yemen. We started working in this area about a year ago, providing healthcare to internally displaced people who have fled the horrors of war and settled in the area.

More than 16,000 people in Yemen have come here in search of protection in the last year. Usually they can bring with them only the most necessary personal belongings. Many children and pregnant women are now living in makeshift huts; clean water and food are both scarce.

To provide all-important healthcare, a team goes daily into the various makeshift camps to run mobile clinics. They provide patients with consultations and, if necessary, arrange transfers to Abs Rural Hospital, which the Ministry of Health runs (supported by MSF).

Rawan Shaif
A painted MSF logo is clearly visible on the roof of Abs hospital in Hajjah, Yemen. MSF continuously share its facilities' GPS locations with all parties in the conflict.

In the hospital there is: an emergency room, an operating theatre, and paediatric, maternity and surgical wards.

We started supporting the Abs Hospital in July 2015. Since then, we have seen more than 11,000 patients in the emergency room; treated nearly 2,000 people as inpatients; and supported over 1,500 women as they gave birth.

If we were not here, thousands of people would be without adequate access to healthcare.

Outside, we hear an aircraft flying past, unusually low, but we don’t think much of it.

Then my phone rings.

My first reaction: disbelief, bewilderment, this must be a misunderstanding. At the same time other colleagues get similar calls, and we have a few anxious minutes of waiting until we get a message confirming the news.

Our hospital was attacked.

What is happening with the patients, with our colleagues?  Are they hurt, could they get to safety?

The telephone network is completely overloaded, of course, everyone looking for any scrap of information about friends and family, trying to find out if they’re all right.

Gradually information starts to slip through. First are the reports of injuries and deaths.

While all this is going on, as I find out later, my colleagues at the hospital are fighting for the lives of the injured. Over the next few hours, several injured people are brought in to the nearest hospital in Hajja.

Gradually, colleagues come to the office. We learn the sad reality of the death of Abdul Kareem Al-Hakimi, one of our technical staff.

Now, we also know that other people died in this unbelievable attack.

The bomb fell in the middle of the hospital grounds. At any time of day, there are patients, employees, and family members there.

For our employees who have minor injuries, the doctor and I build a small "medical room" here in the office to take care of their wounds. Luckily enough, most are doing well.

Outwardly, the shock can be read in each of our faces, which are etched with grief over the loss of our colleagues.

The team is now supporting each other in this difficult time.

Rawan Shaif
A hospital guard sits by the impact site, less than a metre away from the wall of the Abs hospital emergency room.

"Caught in the middle of sadness and anger"

I am caught in the middle of sadness and anger, but also by the helplessness of not being able to stand by my team at the hospital directly. The network is still overloaded and getting through is very difficult.

And amid all this now everybody asks : How could this happen? The coordinates of the hospital, which identify its exact location, are known to all parties in this war.

It was known that this was a hospital, a place where people were struggling for their lives and other people gave everything to save them.

The hospital´s Emergency Room is seriously damaged, but medical activities continue with the Ministry of Health staff. We have taken our staff out temporarily while we carry out an internal investigation.

Civilians and hospitals must not be targets.

Because even war has rules.

fInd out more about our work in yemen