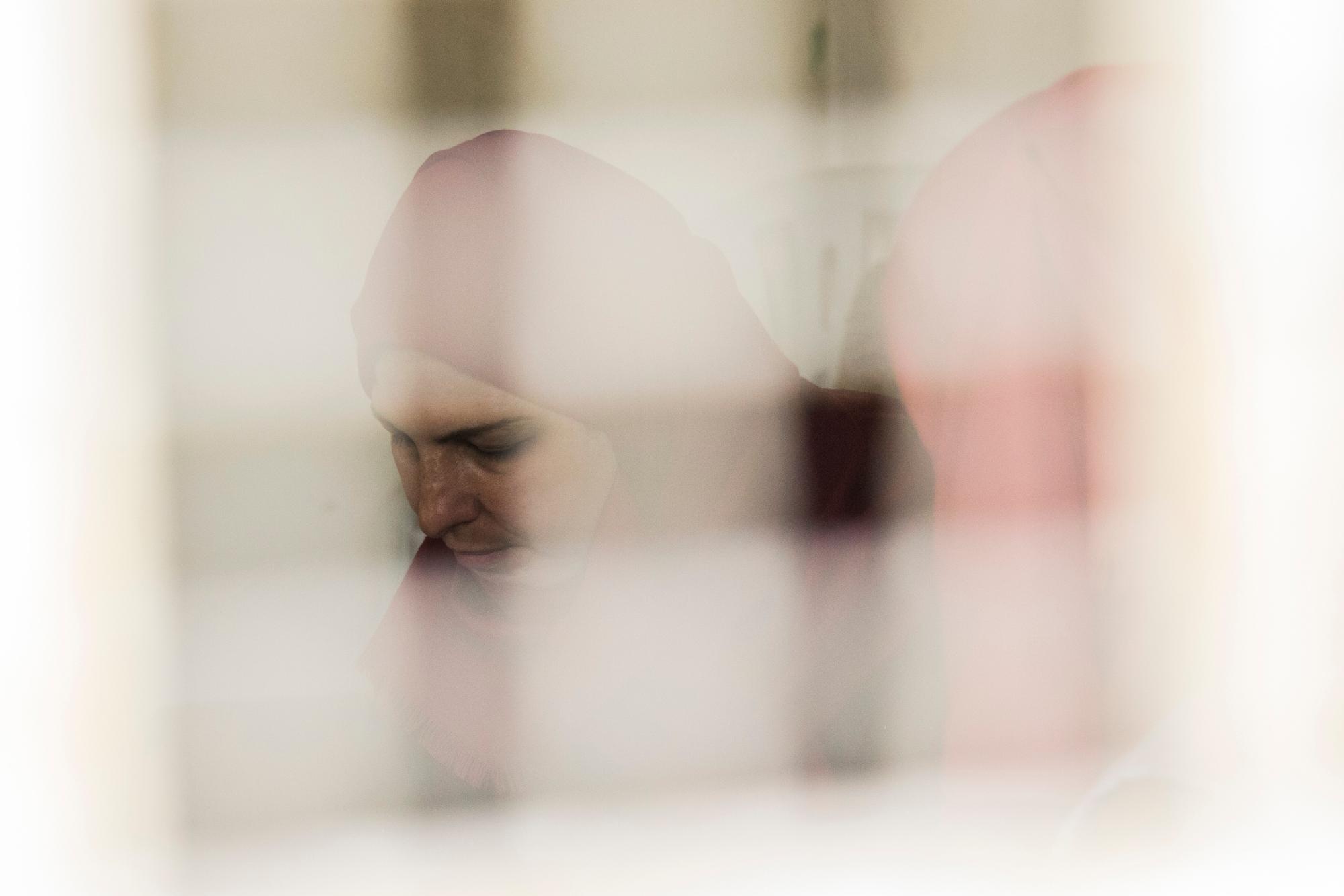 Video: Painting, grief and mental health in the West Bank

Nisreen Al Azzeh will never forget when the tear gas hit her neighbourhood.

It was October 2015. Her husband had just had heart surgery two months before. After breathing in the gas, he coughed a lot and became very tired, before losing consciousness.

The ambulance couldn't reach them in time.

"We used a blanket as a stretcher and some neighbours took him to the hospital," says the mother of four. "But at the checkpoint we were stopped for another 10 minutes.

"He died at the hospital.

"They tried to revive him, but he didn't respond."

From neighbourhood to "closed military zone"

All Palestinian families living there, including Nisreen's, were made to register and given a number.

No visitors, no family members, ambulances or workmen are allowed in, unless they have been given clearance by the military authorities.

A street in Tel Rumeida neighborhood, Hebron city. It was declared a closed military zone in late 2015.

Since May 2016 this order was not renewed, but the tight control has continued in place.

Nisreen, now a widow, lives in Tel Rumeida with her four children, two girls and two boys. She explains that since the area, formerly a bustling and welcoming neighbourhood, was declared a closed military zone, it has become a ghost town.

"We became prisoners," she says. "We live in a prison surrounded by military checkpoints.

"The authorities are just conveying the message 'if you don't like it then leave, leave, leave!'."

Nisreen came to the Hebron in 1993 after living in the Jordanian city of Amman as a Palestinian refugee. She built a life in the city, growing a family with her husband, Hashem.

However, up until the closure, clashes in Hebron had been rife.

Tear gas was used profusely in the city to repress uprisings, resulting in civilian casualities like Nisreen's husband.

"I paint the fact that the entrances to my house are blocked with wire, that we can’t go to the main street, the fact that they just want us to stay at home."
Nisreen al azzehmother of four, hebron in occupied palestinian territory

Hashem used to work for UNRWA (the United Nations agency for Palestinian Refugees), and later became a tourist guide.

"He showed tourists how difficult it is to live under these circumstances," explains Nisreen. "Being locked in, the main street closed, and having to reinforce our windows with metal bars.

"Settlers used to throw stones at us. They even broke into our house."

The family are now under lock-down, forced to stay inside the house in order to observe curfews, and avoid checkpoints and harassment.

At night, when the children are asleep and she can get some peace and quiet, Nisreen paints.

The mother has always been an artist, but took it up more regularly after the intifada in 2000.

Painting is her way to find freedom while having to stay inside the house. Now, it is also a way to overcome the sadness she feels after her husband's death.

"When I paint, I focus especially on my children's emotions," she says. "I try to figure out how to escape the sadness that we feel, the loneliness, and the fact we are locked in.

"The children cannot play outside, and we can't have visitors or visit anyone like we used to before.

"The settlers and soldiers can come any time and beat us or shoot at us - the feeling of insecurity is terrible."

As a result, she has tried to encourage her children to paint, helping them to express their feelings so they can process them.

She has also bought them a phone and computer, which they can use after studying. Since they cannot leave the house, these outlets are vital for their mental health.

"The atmosphere has changed, they are better emotionally," Nisreen explains.

With some regular financial help from tourists (who saw her paintings before the closure), Nisreen's work has become a way to provide for her family.

“I paint about the situation," she says. "I paint the old city in Hebron, the military checkpoints, the suffering, the wire fences.

Surinyach Anna/MSF
Nisreen at home, sharing a meal with her four children that she now has to support on her own: Rajhad 18, Younis, 12, Khalid, seven, and Hanan, five.

Even though Nisreen can’t get out of the house as much as she would like, she uses social media to maintain regular communication with the outside world.

“I tell those who know us that the fact that my husband is dead doesn’t mean that everything is over," she says. "I am here, his children are here and we are staying here.

"I am staying although I am a lonely Palestinian woman.

"I am staying put and with the loudest voice I have.

fInd out more about our work in occupied palestinian territory