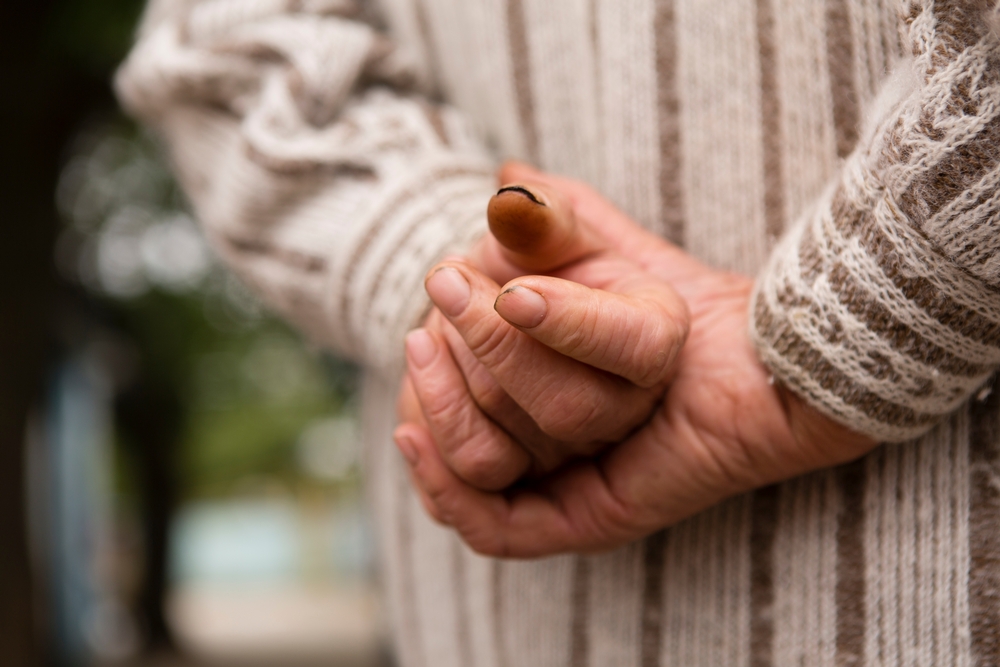 Ukraine: "A shell dropped through the roof of her house"

Three years on and despite two ceasefires, the conflict in eastern Ukraine, which has displaced around two million people and caused an estimated 10,000 casualties, rages on.

For 77-year-old Sazonova Galina, the shelling which destroyed part of her house in 2015 has been followed by rocketing inflation, a low and sometimes absent pension and dependence on humanitarian organisations to access medical care and essentials, including food.

"There is no peace of mind: you go to bed in the evening not knowing what the next hours will bring, whether you are hiding in the basement at night or not."
sazonova galina77-year-old patient

The pensioner lives alone in Pavlopil, a village a few kilometres from the front line where Ukrainian forces and those of the self-proclaimed Donetsk People’s Republic continue to fire into what has become known as the ‘buffer zone’.

After a shell dropped through the roof of her house, Sazonova has relied on Médecins Sans Frontières/Doctors Without Borders (MSF) to provide free medical care, as her pension fails to cover the cost of living in the area.

When I met her, she was sitting on a low wooden bench, originally designed for nursery children who had to evacuate the building.

“The most important thing we all want is peace.” At an MSF clinic in east Ukraine, Eleanor meets 77-year-old Sazonova Galina, who tells her what it’s like as an older person living in a conflict zone. You can read Eleanor’s blog about Sazonova and her neighbourhood by clicking the link in our bio. #MSF #DoctorswithoutBorders #Ukraine #conflict #picture #art #Ukrainian #Pavlopil

The nursery, complete with wooden beds, building blocks and an outdoor playground, has become the site of one of MSF’s 24 mobile clinics, where medical staff visit villagers four times per month.

“It happened in the morning, around 5 am," said Sazonova, while waiting to go to the doctor. "I got up and was going to go for [my] pension to Mariupol.

“I went into the room to get my passport. I thought I had to change my clothes because it was hot outside. Then changed my mind, so as to not be late for the bus.

"I took three steps, closed the door and then the shell burst inside the room I had just closed - I fell because of the blast wave."
sazonova galina77-year-old patient

“I took three steps, closed the door and then the shell burst inside the room I had just closed - I fell because of the blast wave.

“I was deafened, and fell on the floor. But I was not hurt by the shell.

“The room was completely destroyed; there was no roof and windows. Part of the house was damaged by shrapnel, the roof leaks in different places, the ceiling fell. The summer kitchen was damaged too.

“I live in another part of the house, the damaged rooms are left as they are. The worst thing is that the roof leaks. When it was raining I put all pots, buckets, cups and spoons to gather the leaking water.”

The price of bread

Sazonova queued with a group of other pensioners and the odd mother and child, huddled in the clinic. Since the nursery was evacuated the central heating had been turned off and MSF provides small heaters in each consultation room.

Patients spoke among themselves, sombre faces framed by fur hats and stout coats. Their figures against baby blue wallpaper, sprinkled with bumblebees and butterflies.

It is Sazonova’s fifteenth visit to the clinic - whose staff includes an MSF doctor, nurse and psychologist - and she came alone, like most others.

I asked her to describe life in Pavlopil.

Eleanor Davis/MSF
A deserted classroom in a nursery in Pavlopil, Ukraine, where MSF runs its mobile clinic.

“Now it is a little bit better," she said. "But it has been very difficult during last two years."

“There was no transport, the stores did not work, no bread, no water. We had to get to Hnutovo to buy bread (until 2016 a checkpoint lay between Pavlopil and Hnutovo, taking residents half a day to visit and return home).

“A loaf of bread cost 50 Ukrainian Hryvnia (UAH) - broken down, 40 UAH was a cost of a round trip and the bread itself cost around 10 UAH (amounting to around £1.50). That is how we survived.

"Indeed there is no peace of mind: you go to bed in the evening not knowing what the next hours will bring, whether you are hiding in the basement at night or not. There were no hospitals, no medicines.

“Now it is better; the shops are open, the water is brought to town.”

My visit to Pavlopil came during a week of joining MSF’s mobile clinics at different locations along the buffer zone.

For villagers, a recurring issue affecting their ability to access healthcare was their low income, coupled with administrative complications generated by the conflict and other medical workers fleeing the area.

Since the closure of post offices in Pavlopil, pensioners travel to Mariupol, 30km away, to collect around 1,300 UAH (£38.64) a month.

"The queues [for our pensions] were around 300-500 people long. Can you imagine what it means to wait there? We were even standing at night."
sazonova galina77-year-old patient

The division of Donetsk Oblast into DPR/LPR land and that of the Ukrainian Government, meant pensioners such as Sazonova had to register with new authorities to receive their funds.

“The situation concerning pensions was terrible. It had to be reissued,” she recounted, stating that for six months of 2016, she received no pension at all.

“The queues were around 300-500 people long,” she said. “Can you imagine what it means to wait there? We were even standing at night.”

The drastic change to their lives forced upon them by the conflict, at a time they should be enjoying retirement and looking after their health, has had a huge effect on the mental wellbeing on eastern Ukraine’s elderly population.

To support them, MSF psychologists operate in 26 locations along the conflict zone, holding group sessions, awareness talks and one-to-one clinics.

During my visit I heard of an eight-year-old who, after his house was shelled and he hid in the basement with his family, he developed a stutter and stopped going to school.

Others broke down in tears, talking of family not seen since 2014, or living alone and being unable to sleep for fear of shelling.

MSF medical staff report acute cases of anxiety and depression in patients at the clinic, worsening existing common conditions such as diabetes, hypertension and cardiovascular disease.

“I visited the psychologist four times and it helped,” Sazonova said, before disappearing behind the doctor’s door.

“The most important thing we all want is peace.”

our work in ukraine >