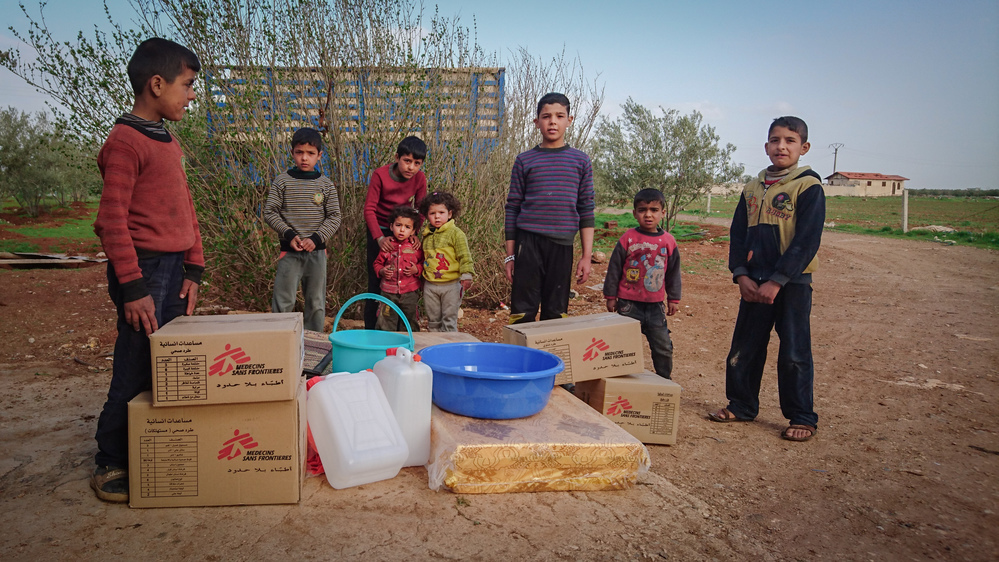 Syria: "We believed things had calmed down. We were wrong"

The village of Al Nuaymah, in southern Syria, is a shadow of its former self.

Once home to about 10,000 people, six years of airstrikes and fighting between Syrian government forces, opposition, and IS-affiliated groups, have forced residents to flee their homes.

However, with little money and few resources, many are unable to travel far.

Some Al Nuaymah residents have opted to return to their village, to live in buildings that are in ruin, or tents pitched on the land. Often, several families share one home.

Mohammed Ali Aboud and his family are from Al Nuayma, and received one of 893 relief kits distributed by Médecins Sans Frontières/Doctors without Borders (MSF).

Below, he describes his family's plight and the daily difficulties they endure.

There are 21 people in my family, including my grandchildren. We are originally from Al Nuaymah. Before the war I was a taxi driver here.

In 2014 the fighting in our village became very bad. We left for Busra and stayed for three months.

We came back to Al Nuayma when we believed things had calmed down. We were wrong.

My wife and three of my sons were killed here, in July, 2015. They were killed by a barrel bomb.

I have two sons left, their children, and the children of my three who sons were killed. I have two daughters and both are married.

MSF
The ruins of Al Nuaymah village, once home to 10,000 people.

There are frequent airstrikes.

We can only move safely to two other towns, Um al Mayathen and Saideh. Beyond that, villages are under regime control.

It is a very dangerous situation.

The children have not gone to school in three years. There is no school in the village. Some people have moved to another place for their children´s education but we could not afford it.

"We depend entirely on aid"

We depend entirely on aid we receive from humanitarian organisations.

We receive milk, flour, rice and bulgur. We wish there was baby formula, because some children in my family are young, just eight-months-old.

There is no electricity here. The water comes from artisanal wells, drilled by local activists.

"One of my sons suffered a head wound, from the barrel bomb. He needs treatment but he does not get any."
mohammed ali aboud

My family lives in our old house. It used to have four rooms, but it was destroyed by the bombing. Now there is one room left. My son and I stay in this room. The rest of the family live in two tents outside the house.

There is some gasoline available but it is too expensive and I cannot afford it.

We have an open fire. Over the winter, I burned the bedroom furniture. I also cut two olive trees near the house and used that for fire. It´s difficult to find wood.

We wish we had more canned food. It is difficult to cook rice and bulgur without fire.

There are no doctors in the town and a great need for medicine.

There is only one nurse, who can help with a headache or stomachache.

My grandchildren are very young, and need to see a doctor, because they are often sick - but the nearest clinic is 30 kilometers away.

One of my sons suffered a head wound, from the barrel bomb. He needs treatment but he does not get any.

"We have lost all hope"

Because of the MSF relief kit we received, we now have blankets, mattresses, hygiene items and some kitchen tools.

It makes a big difference. We need any help that any organisation can offer.

As for the future, we have lost all hope. Our only belief is in God.

We hope that one day in the coming months that there will be a solution to this conflict, but we doubt it.

What has happened in Al Nuaymah is echoed throughout the region. In February and March, opposing forces vied for control of the city of Dara'a (in southern Syria), causing a surge of 30,000 internally displaced people.

Many hospitals and medical structures were forced to close to avoid being targeted, creating a severe lack of access to healthcare in the area. Those that remain open are not receiving enough supplies and medications, due to many roads being blocked or partially closed because of the conflict.

In response to this crisis, MSF conducted an emergency distribution of 893 kits of essential relief items (including hygiene kits, clothes, cooking utensils, blankets and mattresses).

The kits were distributed to families in two areas: the farmlands east of Dara'a city and Al Nuayma village.