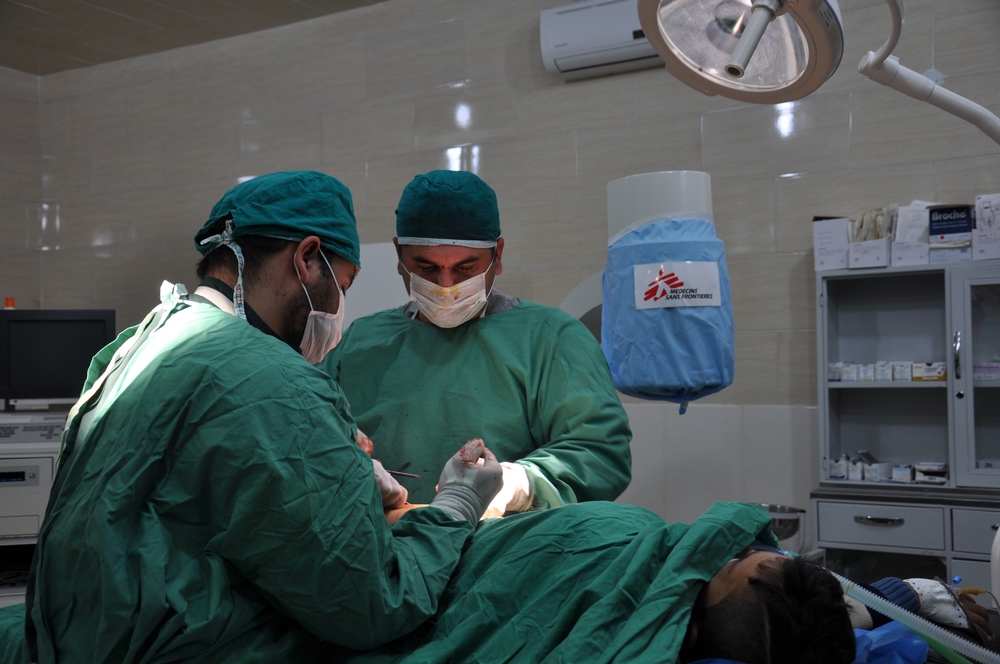 Syria: "I watched my son die in my arms"

People living in Raqqa, northern Syria, are caught in the middle of increasingly intense fighting. For six years of war they have endured bombing, persecution and public beheadings - and as a result, thousands have risked their lives crossing checkpoints and minefields to reach safer areas. 35-year-old Mohammed describes his torturous journey to escape: including the terrible price paid by his family.

Raqqa city, northern Syria, February 2017: the frontlines were getting closer and airstrikes were becoming more frequent.

I planned to escape.

One day, while I was working in the market, someone told me that if I wanted to run away, I should hide near some farmer’s tents, and then continue north.

The very next day, I took my wife and four children and went to where the farmers were camped. We slept there that night, the people there provided us with food.

The following day, we found a car to take us towards the area controlled by the Syrian Democratic Forces (SDF).

But he soon left us on the roadside and drove off.

After a while, I saw an old man and woman riding a motorcycle. They were coming in our direction, and were planning to escape too. I stopped them, asking for help.

The man gave me their motorcycle to ferry my children north to the SDF checkpoint. I set off with my elder son and daughter while the rest of the family followed on foot.

We had gone about 100 metres when the motorcycle hit a mine.

Remnants of war, destroyed by mortar fire, amid the rubble in northern Syria.

I picked up my son and my wife held our daughter. We waited for a car – any car – to come along the road.

I watched my son die in my arms.

I was forced to leave his body there.

I was on the point of passing out when a car stopped for us.

The driver took us to a doctor in the village of Mazra’t Tishrin (23 km northwest of Raqqa city). The doctor told us we needed to get to hospital, so we returned to Raqqa.

"After two hours, I gestured to a doctor to come and treat me – I wasn’t able to talk because of the blood flowing from my neck."
mohammed

When we arrived at Raqqa hospital, a member of Islamic State (IS) refused to admit me. Even though I was bleeding, they put me in handcuffs and said: "Let him die."

After two hours, I gestured to a doctor to come and treat me – I wasn’t able to talk because of the blood flowing from my neck.

But the doctor cried and didn’t come. I think he was afraid that if he didn’t follow orders, he would be killed.

"Doctors are so afraid here"

After a while, a commander came and told the doctor to treat me, and I was taken into the operating theatre.

Just then, an injured IS member was brought in, and the doctor was called away to treat him.

But after a short while, he came back and completed my treatment, apologising, and asking me not to reveal that I was treated by him.

"The doctor came and asked how I was, and when he saw that I was poor, he gave me some money."
mohammed

Doctors are so afraid here. I stayed in the hospital for three days.

The doctor came and asked how I was, and when he saw that I was poor, he gave me some money.

After a few days I returned home and went back to work in the market. People got to hear my story – how my son had died and my daughter was injured.

A man came and offered his help to get me and my family to a safer area in the north.

I wasn’t sure if I should trust this person or not, but he gave me his address and told me not to worry: He swore that he would get my family there safely and for free.

At first I was scared to trust him, but the following day we went to the promised location at the agreed time.

MSF
"He drove us out of the city, avoiding several checkpoints."

He drove us out of the city, avoiding several checkpoints. We stopped at his mother’s house for a while.

I told his mother my story and she cried and told me that I was like her son. She asked her son to make sure my family reaches the SDF checkpoint safely.

When it was dark, we got back in the car, he turned the headlights off and we drove towards the checkpoint.

As we approached the checkpoint, they shot two bullets into the air. We stopped.

They gave us a sign by torchlight to proceed. Thank God there were no mines on the road and we reached Al Khineizat checkpoint safely. When we did, I burst into tears. We finally arrived to a camp in northern Syria.

"My daughter needs to see an eye surgeon and my fractured finger and chin need to be followed up too."
mohammed

We’ve been living here for about a month. The camp is safe but I’m in a bad financial situation. Sometimes I get some work to earn a little money, but my daughter needs to see an eye surgeon and my fractured finger and chin need to be followed up too.

When the situation stabilises in Raqqa, I may go back there, since at least my home is there and it is where I was born.