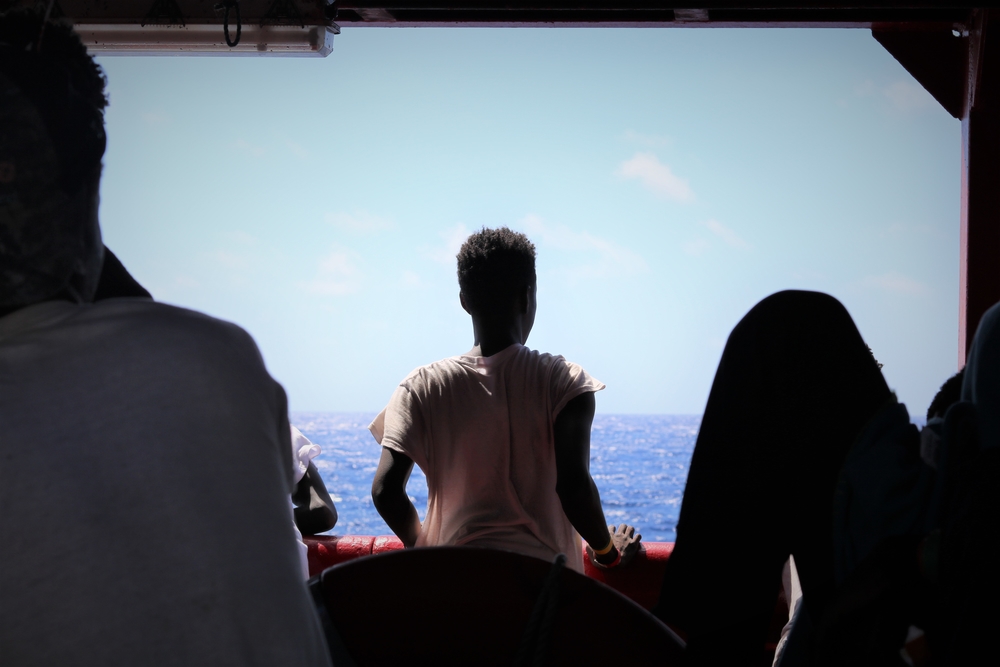 Search and rescue: “He just kept running, despite the shrapnel wound bleeding”

Luca Pigozzi is an Italian doctor on board the Ocean Viking – a search and rescue ship currently in the Central Mediterranean, saving the lives of refugees, migrants and civilians forced to flee insecurity in Libya. He shares the traumatic story of a young patient rescued from a sinking boat.

Khalil was saved from a rubber boat on Monday 12 August 2019. I was there when one of the dinghy’s inflated tubes burst and people fell into the water.

I assisted the rescue team as they pulled him and his fellow travellers out of the sea. He was one of 105 people saved from the Central Mediterranean by the Ocean Viking that day.

Once we were back on board the search and rescue ship, he came to my attention, complaining of constant pain in his abdomen.

After a quick examination, I identified the culprit: shrapnel.

Shrapnel from grenades or bullets is a common finding in war-wounded patients or those coming from a conflict zone, but it’s always confronting to see this type of traumatic injury in someone so young – just 20 years of age.

Sometimes the metal can penetrate deeply, injuring the organs. In those situations, the patient requires major surgery. In Khalil’s case, the shrapnel was lodged 1.5 cm under the skin.

I embarked on removing the shard from the left side of his body as it was causing him significant discomfort and he was at risk of infection.

As I worked, he told me his story. This is what he said…

It had never been Khalil’s plan to make this crossing by sea.

He was a taxi driver in Libya. A few months ago, as he drove through a checkpoint, some armed men stopped his car. They asked to see his phone and went through his pictures.

In one of the photos, you could see he was carrying a gun.

“But that is normal in Libya these days,” he told me. “There is a war happening – everybody carries a gun now.”

While on the ship we are often focused on the situation in Libya for refugees and migrants, the reality there is extremely concerning for all civilians.

Since fighting erupted in Tripoli in April this year, hundreds have been killed – mostly Libyans themselves – and tens of thousands have been displaced as indiscriminate shelling, gunfire, and airstrikes continue in densely populated areas of the city.

Because of the photo, the soldiers accused Khalil of being part of a militia or armed group. They took his car, his money and his documents, and threw him into prison.

Khalil was detained for three months.

Every day he was interrogated and beaten – which I could recognise from the scars on his body. The people held captive there were treated very badly, sometimes going days without food or water.

Tension mounted as people became increasingly distressed. One day, the tension boiled over and there was a riot.

As he attempted to flee, one of the guards shot at him with a Kalashnikov. He was lucky he wasn’t directly hit. Around him, he could see people being shot and falling down. He didn’t know if they died because, at that point, he was running for his life.

He just kept running and running, despite the wound and the bleeding.

Over the following days, his main concern was to find safety. He was worried that he would be found by a militia or armed group. His mother told him it wasn’t safe to be at home. He kept moving from place to place.

"I can’t begin to imagine how I would feel in his position: forced to step into the darkness of the sea, to risk my life in the hope of a better one"

When he eventually arrived in Tripoli, he called his cousin who was living there for help. The cousin said he was in “turkina” or “in the corner” – which is what people call the area where they gather before being pushed into boats to cross the Central Mediterranean.

This was how he came to leave Libya, on a rubber boat, relieved to leave behind a war-torn country where there was no safe place for him.

I can’t begin to imagine how I would feel in his position: forced to step into the darkness of the sea, to risk my life in the hope of a better one.

WHY MSF IS RESCUING PEOPLE IN THE MEDITERRANEAN >