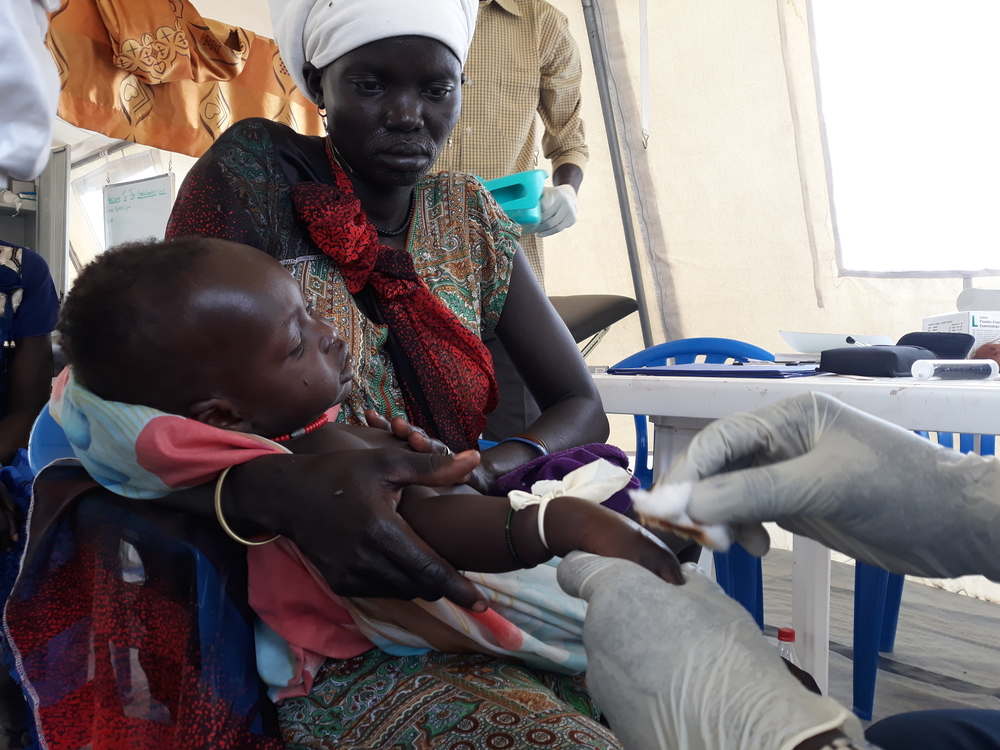 Pneumonia: Gavi should stop awarding special funds to Pfizer and GSK for vaccine

Médecins Sans Frontières / Doctors Without Borders (MSF) is urging Gavi, the Vaccine Alliance, to stop awarding funds to Pfizer and GlaxoSmithKline (GSK) for a pneumonia vaccine.

Instead, MSF asks that Gavi reserve its remaining funds for the vaccine under the Advanced Market Commitment (AMC) for a new manufacturer offering a more affordable version.

Pfizer and GSK have already earned more than their fair share of the AMC subsidy, in addition to billions made from global sales.

“The current high price of the vaccine blocks kids from being protected against this childhood killer, and as doctors and nurses we have seen far too many children die due to pneumonia,” said Miriam Alia, MSF's advisor on vaccination and outbreak response.

Gavi is set to launch a call this week for its third replenishment to raise funds for its 2021-2025 programmes at the upcoming Tokyo International Conference on African Development (TICAD) in Yokohama, Japan.

In calling for donor funding, Gavi should explore all ways to secure more affordable vaccines, including through promoting competition.

Pneumococcal conjugate vaccine (PCV), which protects children against pneumonia, the leading cause of childhood death, currently absorbs upwards of 40 percent of Gavi’s total budget for 13 vaccines.

“Millions of kids around the world remain vulnerable to pneumonia because of exploitative pricing by Pfizer and GSK"
Kate ElderVaccines policy advisor, MSF Access Campaign

The AMC is a special financing mechanism set up in 2007 by Gavi and six donors (Italy, the United Kingdom, Canada, the Russian Federation, Norway, and the Bill & Melinda Gates Foundation) to stimulate development of pneumonia vaccines that meet developing-country needs and accelerate global rollout of this lifesaving vaccine.

AMC donors pledged US$1.5 billion in a special subsidy fund that is used to top up the base price of the pneumonia vaccine charged by each company.  Nearly one-third of the funding - $485 million - was pledged by the UK Government.

Pfizer and British company GSK, as the only two pharmaceutical corporations currently producing the vaccine, have long maintained a duopoly that allows them to keep pneumonia vaccine prices high.

Gavi has been paying about $9 per child for PCV with an additional subsidy awarded to the two corporations on top of this base price.

However, a third manufacturer – Serum Institute of India – recently announced that it will make PCV available at $6 per child by the end of this year, presenting Gavi and its donors with a clear pathway to reach more children with the life-saving vaccine.

“Millions of kids around the world remain vulnerable to pneumonia because of exploitative pricing by Pfizer and GSK,” said Kate Elder, vaccines policy advisor for MSF's Access Campaign.

“Gavi has already awarded hundreds of millions to these two corporations in special funding under the AMC mechanism. With the expected entry of a new and more affordable pneumonia vaccine producer, Gavi now has a chance to stimulate real competition in the PCV market.

"We’re calling on Gavi to reserve the remaining AMC funds for new producers and to stop doling out subsidies to Pfizer & GSK, which have already reaped more than their fair share of the fund.”

The $1.5 billion AMC fund was intended to help encourage competition among manufacturers to reduce the price of PCV.

However, Pfizer and GSK alone have earned over US$1.2 billion of this fund, in addition to over $4 billion in revenues from PCV sales to Gavi.

Just $262.5 million remain in the AMC fund, which is currently scheduled to conclude at the end of 2020. MSF calls on Gavi to extend it beyond 2020 and to save the remaining funds for a new manufacturer offering a more affordable version in the near future.

Having a third competitor will also offer a better chance of self-financing the vaccine for countries that have not introduced PCV yet in their programmes and to those that will lose Gavi support in the future. Switching to a more affordable version could potentially result in savings of up to $1 billion for the organisation in the coming financial period.

“More competition in the pneumonia vaccine market is desperately needed so that countries can afford to protect their children," said Alia.

"As Gavi launches its replenishment, it’s time to put an end to unnecessary funding that boost profits for multinational corporations when it could instead be held for a more affordable pneumonia vaccine.

"What is the point of having such good vaccine when it remains unaffordable and out of reach to protect the kids against this devastating disease?”

Globally, pneumonia causes more than a quarter of all deaths in children under the age of five – nearly one million young lives lost every year.

Pneumococcal infection and resulting deaths among children can be prevented with PCV. Yet, nearly one-third of the world’s countries have been unable to introduce the vaccine, largely due to its high price. While 60 developing countries have introduced PCV in their routine immunisation programmes with Gavi support, the vaccine remains priced out of reach in many developing countries – particularly middle-income countries ineligible for Gavi funding.

“In today’s tight financial climate and with countries transitioning away from Gavi’s financial support, we need to use our dollars as smartly as possible,” said Elder.

A more affordable pneumonia vaccine will result in Gavi being able to stretch its budget further as it goes into its replenishment year, and in the longer term it will help ensure continued sustainability of national immunisation programmes in all developing countries as they assume the financial costs themselves."