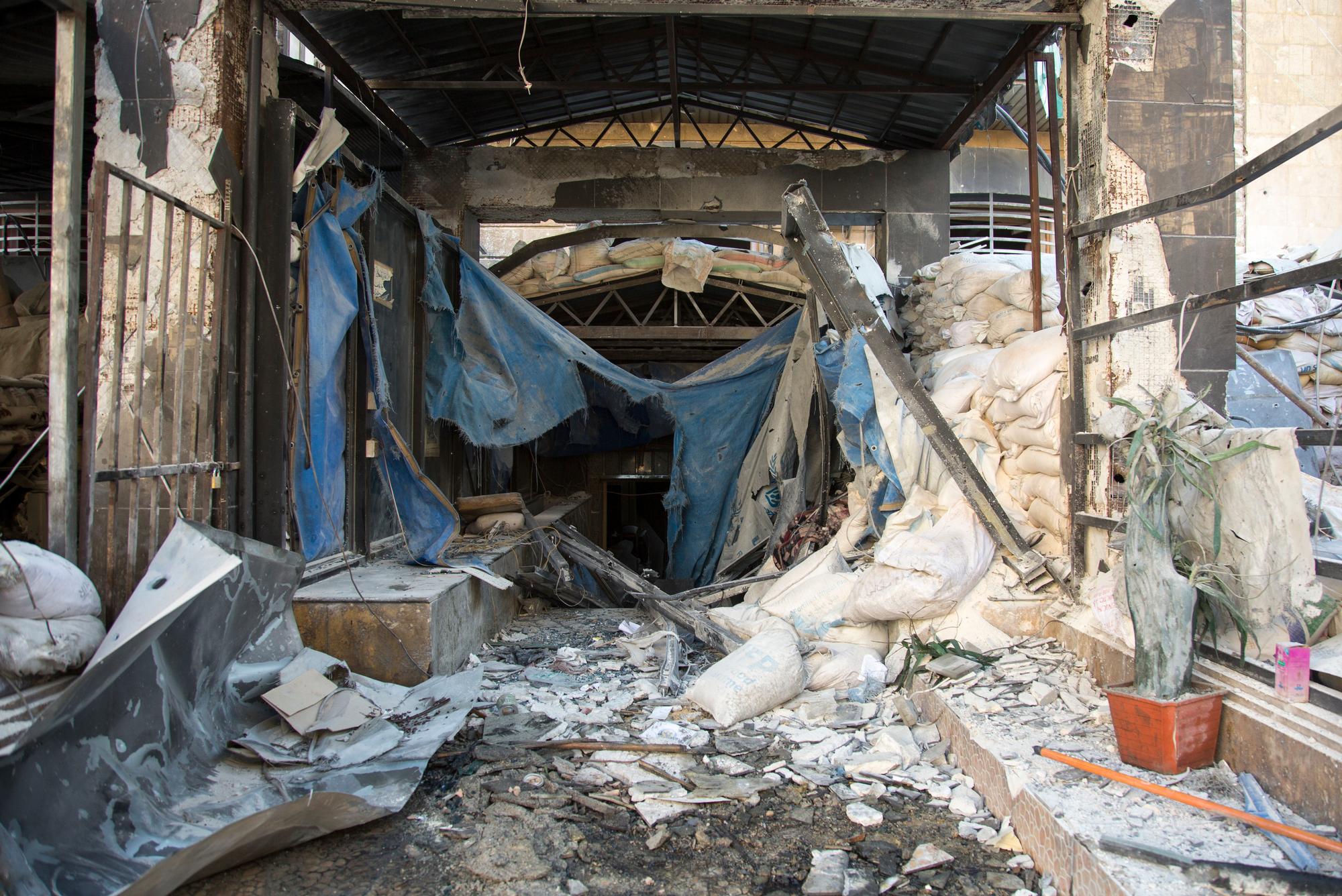 Photostory: Inside an east Aleppo hospital destroyed by airstrikes

The following photos depict the aftermath of an attack on one of east Aleppo's key surgical hospitals. This happened during airstrikes on 17 November 2016.

The damage was so extensive that the hospital was forced to go out of service immediately.

It had an emergency room, an intensive care unit, and a number of operating theatres providing orthopaedic and general surgery.

Access to healthcare in east Aleppo has now become next to non-existent for a population of over 250,000 people who desperately need it.

They have been trapped under siege for over four months.

Since the airstrikes resumed on the 15 November 2016, heavy bombings and clashes on the ground have left hospitals utterly destroyed.

We strongly condemn all attacks on civilians and breaches of international humanitarian law, perpetrated by all warring parties in Syria.

Dr Abu Wassim was working in the hospital when it was hit by airstrikes on 17 November 2016.

KARAM ALMASRI/MSF
The road in front of the hospital hit by airstrikes on 17 November 2016.

“We started hearing shells raining down on the buildings at the end of the street, about 500 metres away from the hospital.

We heard 40 or more shells exploding, with the noise moving closer and closer towards the hospital.

That’s when all the staff – technicians, nurses and doctors – evacuated all the patients down to the basement.

KARAM ALMASRI/MSF
The airstrikes shattered everything on the surroundings, including ambulances and cars parked in the front of the hospital.
We moved about 15 patients in total, including a child in the intensive care unit.

He had had surgery after sustaining an injury to his heart.

The boy started to gain consciousness as the shells fell on the street outside the window of the intensive care unit.

We had to disconnect him from the ventilator to take him down to the basement.

KARAM ALMASRI/MSF
The generator that supplied the hospital with electricity remains intact after the airstrikes. Hospital staff had surrounded it with sandbags to protect it from possible bomb damage

The bombing lasted for two hours. During that time, the shells never stopped.

The basement was very crowded – there were patients lying on the floor.

KARAM ALMASRI/MSF
A nurse inspects the damage in the bombed hospital. Since the siege began in July, every functioning hospital in east Aleppo has been damaged by airstrikes and shelling, some of them more than once.

We had one fatality amongst our staff as a result of the bombing.

One of the hospital attendants was injured by shrapnel that pierced his chest and severed a major blood vessel.

KARAM ALMASRI/MSF
Sandbags piled against the windows of the intensive care unit to provide it with some extra protection. A child who was recovering from surgery had to be taken off life support equipment and carried to the basement of the hospital to shelter from the bombs.

He lost a lot of blood and we had to operate on him without electricity.

We were unable to save him, and he died.

KARAM ALMASRI/MSF
The second floor of the hospital, where most of the supplies of medications were stored, was severely damaged.

Before the bombardment, I had been in the operating theatre performing an amputation.

After the bombing, I had to finish the surgery with an LED lamp because there was no electricity.

Our mobile oxygen concentrator was completely burnt to pieces.

KARAM ALMASRI/MSF
An ambulance parked in front of the hospital was destroyed, leaving only its metal frame. Fortunately there was no one in the vehicle when it was hit.
We could not discharge any patients during the bombing, because no ambulances could come to the hospital as long as it continued.

But as soon as the bombardment eased off, we organised for ambulances to come to the back entrance of the hospital and evacuate the patients to nearby health centres.

KARAM ALMASRI/MSF
The main entrance of the hospital after it was hit by bombardments.

The front entrance of the hospital was totally inaccessible – blocked by rubble from all the damage and destruction.

All of the cars parked in front of the hospital were completely burnt out, and an ambulance was totally destroyed.

KARAM ALMASRI/MSF
A room on the second floor of the hospital. Since 2013, MSF has been providing drugs, supplies and medical equipment to health facilities in east Aleppo.

Many of our staff had been staying on the upper floors of the hospital.

These floors were now damaged and left uninhabitable – there were no longer any doors or windows.

So our staff had to try and find somewhere else to sleep.”

fInd out more About our work in syria