Philippines: One month after the typhoon, MSF supporting the health system as it recovers

One month after Typhoon Haiyan hit the Philippines, our emergency teams are still working on three of the country’s hardest-hit islands, providing healthcare for people in remote areas and supporting the health system as it recovers from a disaster which killed 5,600 people and displaced more than four million, according to official figures.

Read more about our work in the Philippines

Healthcare after the typhoon

“We are providing healthcare to people, including those who live in remote areas where access to healthcare is limited. We are also supporting the health system as it recovers: teams are setting up temporary structures, supporting and helping to repair existing medical facilities so that they can function again,” explains Natasha Reyes, MSF medical coordinator in the Philippines.

While international medical teams are beginning to leave the islands, MSF intends to stay, ensuring that urgent medical needs are met until the health system is adequately recovered.

The first MSF teams arrived in the Philippines on 9th November in the immediate aftermath of the typhoon. During the first 10 days of MSF’s intervention, transport was problematic, with few functioning airports and congested ports.

Roads were also blocked and damaged and both fuel and vehicles were in short supply. In spite of persistent logistical constraints, the teams gradually gained access to the most affected areas.

Some of the main roads have now been cleared, and travel by boat and plane has become easier.

“On the whole, aid efforts have increased, but there are disparities from one place to another,” says Ibrahim Younis, MSF emergency coordinator in the Philippines.

In Tacloban, for example, there are a number of humanitarian organisations present. The few functioning hospitals have sustained major damage and staff work around the clock to care for large numbers of patients.

There is no electricity and there is a shortage of healthcare workers as many have left and have not yet returned. In Tacloban, MSF is filling a gap in the health system, providing secondary healthcare and surgical support.

In other urban centres like Guiuan and Burauen, MSF is one of only a few organisations offering humanitarian aid or providing medical care.

In some rural and coastal areas such as the archipelago and the Eastern coast of Panay island, the north of Leyte and eastern Samar islands, aid has been deployed slowly, and MSF mobile clinics are still finding villages where people have received no assistance at all.

MSF teams have set up four temporary hospitals, including an inflatable hospital in Tacloban, and tented hospitals in Burauen and Tanauan (on Leyte island) and in Guiuan (on Samar island). In Balasan (Panay island), teams are also supporting existing hospitals and health centres.

Patients seen by MSF are suffering from respiratory infections and infected wounds. There are also patients with obstetrical complications, trauma injuries, and with chronic diseases who have had their treatment interrupted or have had to go without their medication. Psychologists are on hand to offer individual consultations and group sessions.

As living conditions in many places are overcrowded and unsanitary, MSF teams have also been taking measures to help prevent the spread of disease. Teams have provided clean drinking water to people in affected communities.

Read more about our work in the Philippines

MSF in the Philippines

More than 2,100 surgical procedures and dressing have been carried out, and more than 28,000 relief kits and 9.100 tents, shelters or reconstruction kits have been distributed or are being distributed. 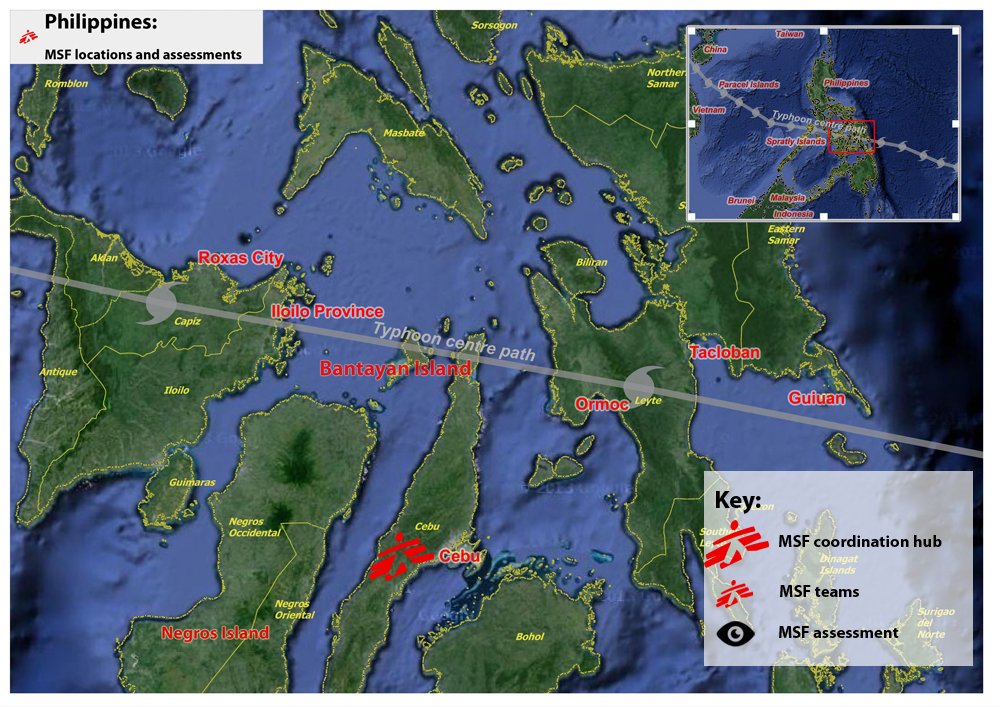