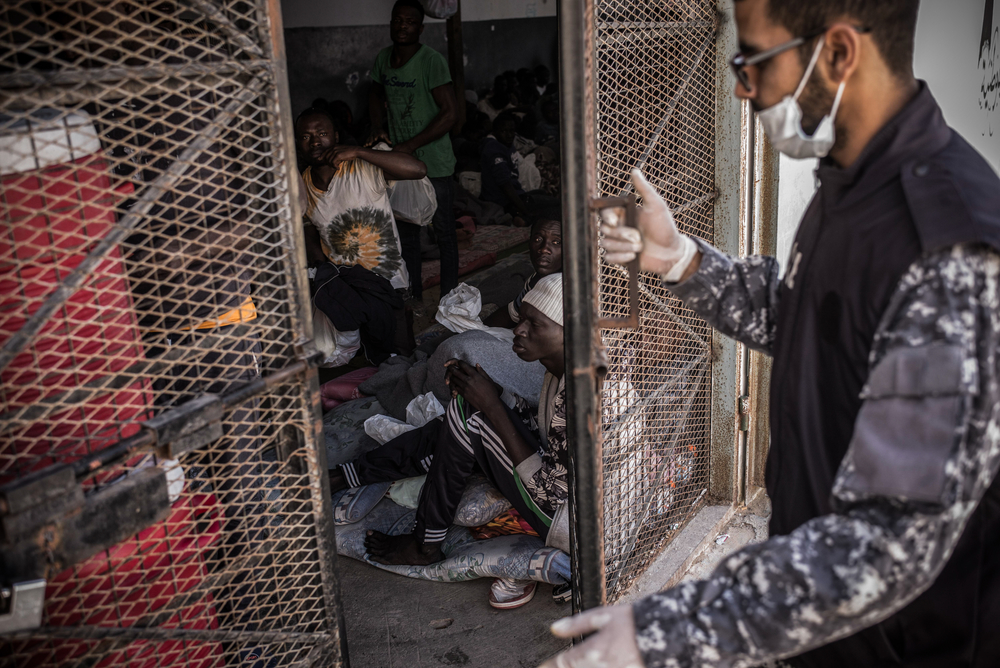 What migrants and refugees are living through in Libya should shock the collective conscience of Europe’s citizens and elected leaders.

Blinded by the single-minded goal of keeping people outside of Europe, European funding is helping to stop the boats from departing Libyan waters, but this policy is also feeding a criminal system of abuse.

The detention of migrants and refugees in Libya is rotten to the core.  It must be named for what it is: a thriving enterprise of kidnapping, torture and extortion. And European governments have chosen to contain people in this situation. People cannot be sent back to Libya, nor should they be contained there.

Guillaume Binet/Myop
Men detaineed in Abu Salim detention centre. Detainees spend days and months in Libyan detention centres, without knowing when they will be released.

MSF has assisted people in Libyan detention centres in Tripoli for over a year, and has witnessed first-hand the scheme of arbitrary detention, extortion, physical abuse and deprivation of basic services that men, women and children suffer in these centres.

People are simply treated as a commodity to be exploited. They are packed into dark, filthy rooms with no ventilation, living on top of one another. Men told us how groups of them are forced to run naked in the courtyard until they collapse from exhaustion. Women are raped and then made to call their families back home asking for money to be freed.

All the people I met had tears in their eyes, asking again and again, to get out. Their despair is overwhelming.

Guillaume Binet/Myop
A woman with burns is assisted by another detainee at a female-only detention centre in Libya. They were intercepted at sea by the Libyan coastguards while attempting to flee Libya and reach Europe. The chemical burns on her legs were caused by a mixture of diesel and sea water.

The reduced numbers of people leaving Libyan shores has been lauded by some as a success in preventing loss of life at sea, and smashing smugglers’ networks.

But with the knowledge of what is happening in Libya, that this should be lauded as a success demonstrates, at best, pure hypocrisy and at worse, a cynical complicity in the organised business of reducing human beings to merchandise in human traffickers’ hands.

The people trapped in these well-documented, nightmarish conditions in Libya need a way out. They need access to protection, asylum and increased voluntary repatriation procedures. They need an escape to safety via safe and legal passage, but to date, only a tiny fraction of people have been able to access this.

This horrific violence against them must stop; there needs to be a basic respect for their human rights including access to sufficient food, water and medical care.

Despite declarations by governments that improvements need to be made to peoples’ immediate conditions, this is far from happening today.

Instead of confronting the vicious cycle that their own policies are creating, politicians have hidden behind unfounded accusations towards NGOs and individuals who attempt to help people in dire straits.

During its search and rescue operations at sea, MSF has been shot at by the European-funded Libyan coastguard and repeatedly accused of collusion with traffickers. But who is colluding with criminals here? Those seeking to rescue people, or those enabling people to be treated like a commodity to be packed and sold?

Libya is just the most recent and extreme example of European migration policies which go back several years, where a primary objective is to push people out of sight. The EU-Turkey deal from 2016, and what we have seen in Greece, in France, in the Balkans and beyond, reveal a growing trend of border closures and push-backs.

What this does is close options for people who seek safe and legal ways of coming to Europe and pushes them further and further into the smugglers’ networks, which European leaders insist they want to dismantle.

Safe and legal avenues for people to cross borders are the only way to eliminate the perverse incentives that allow for smugglers and traffickers to thrive whilst at the same time fulfilling border control objectives.

We cannot say that we did not know that this was happening. The predation on misery and the horrific suffering of those trapped must end now.

In their efforts to stem the flow, is allowing people to be pushed into rape, torture and slavery via criminal pay-offs a price European governments are willing to pay?