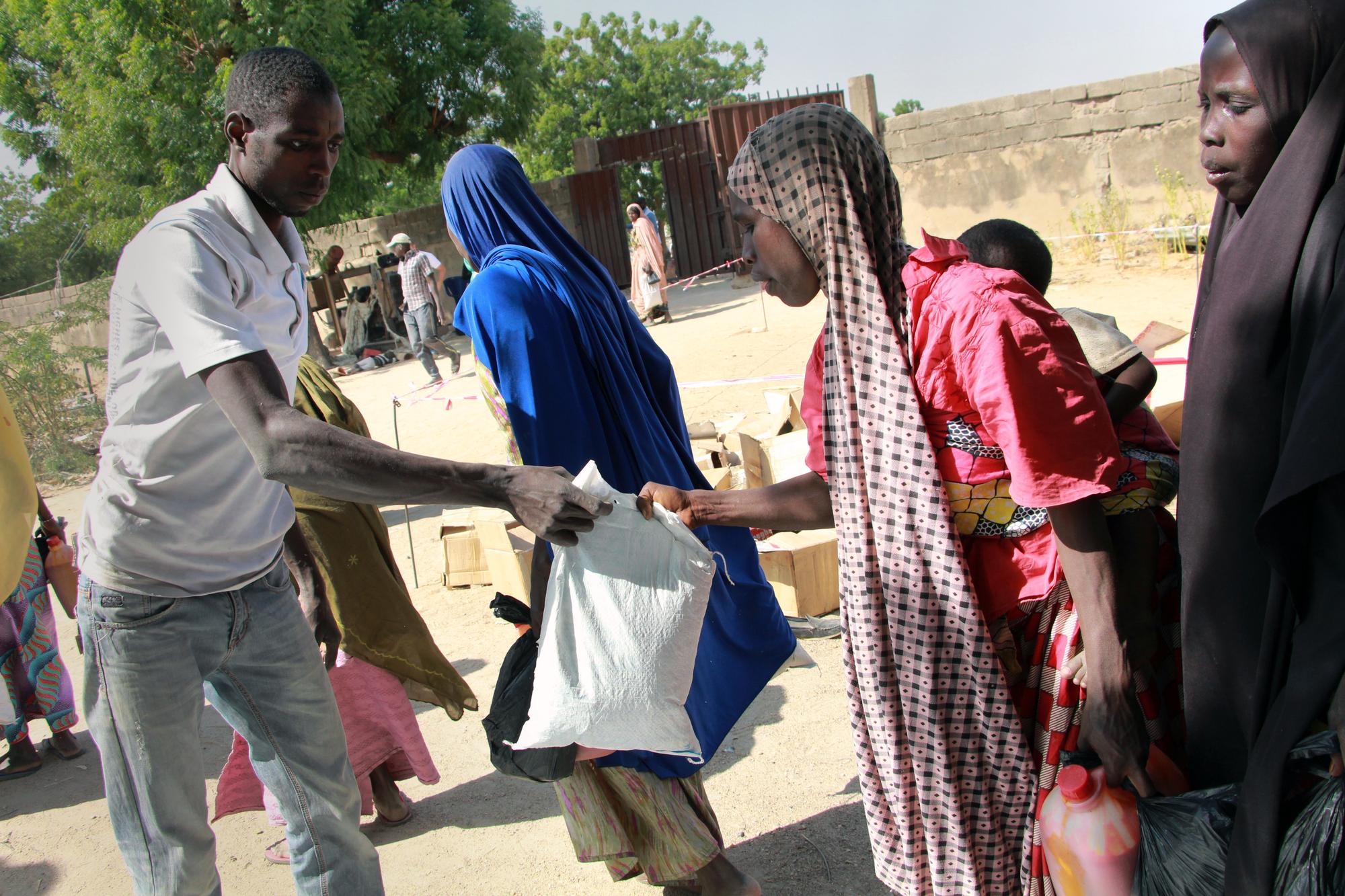 Nigeria: Teams deliver over 800 tonnes of food to malnourished families

One morning, in the village of Gambaru in Nigeria, a grandmother woke up to the sound of gunfire.

Leaving everything behind, she trekked with her family for four days to get to Maiduguri, the largest city in northeast Nigeria.

Now having lived as displaced people for over two years, with no income, jobs or schools, the grandmother explains the main problem for her and other families is food - or, more specifically, how to get it.

"Usually we eat once a day, but sometimes we give the food we have to the children and we go hungry," she says. "We've only had one distribution of food since we arrived."

This lack of food is causing major health problems, amongst them malnutrition.

"It's hard for us to stay healthy here," Mallaam explains. "My grandson has been sick for the past two weeks.

"This is the fourth time he's been ill since we arrived. He has a fever and his temperature is rising.

Over the past three months, Médecins sans Frontières/Doctors without Borders (MSF) has distributed 810 tonnes of food in Maiduguri, which is enough to feed 26,000 families for two weeks.

“They've almost no way to make money, food costs have more than doubled in 12 months, and years of violence and insecurity have pushed their ability to cope to the limit.”
phillippe le vaillantmsf head of mission in nigeria

So far, each family has received 25kg of millet, 5kg of beans and five litres of palm oil, as well as eight bars of soap.

“As a medical organisation, it’s not usually MSF’s role to provide people with food,” says Phillippe Le Vaillant, MSF head of mission. “But there are people in desperate need.

"Other organisations were not stepping in up until now, so we were obliged to fill this gap.”

Around one million people who fled violence and insecurity in Borno state, related to the ongoing conflict between armed groups and the Nigerian armed forces, are now living in Maiduguri.

Despite an increase in humanitarian assistance in recent months, thousands of people in the city are still in need of food, water and medical care.

The most vulnerable are often people living in informal camps.

These camps are not recognised by the authorities, so people receive little to no assistance, even though thousands live in them.

“Many people came to Maiduguri with nothing but the clothes on their backs,” continues Le Vaillant. “They have almost no way to make money, the cost of food has more than doubled in 12 months, and years of violence and insecurity have pushed their ability to cope to the limit.”

As well as running two large health facilities and two inpatient therapeutic feeding centres (ITFC) for severely malnourished children, we are trucking 80,000 to 100,000 litres of water into Maiduguri every day.

This is an emergency measure to give people water to drink before a longer term solution can be put in place.

We are also constructing new latrines, dislodging existing latrines and rehabilitating boreholes in camps in the centre of Maiduguri town.

paTIent story: "We are so hungry"

Life in our village was comfortable, we had everything that we wanted. We could farm, but here we do not have access to any land.

We had to leave because of an attack. We escaped at night, in such a rush that we took nothing with us apart from our children.

We trekked on foot – it took four days to reach Maiduguri.

We knew that armed men were patrolling the area, so we hid every time we heard a motorbike or a car. We stayed out of sight until we couldn’t hear the sound of the vehicle any longer.

It was really difficult for the children. Two of them fell sick and they have not yet recovered. They have fever, cough and are stressed.

But we are here now and managing with what we have. Most days we only eat once and have to go to sleep with empty stomachs.

During the day, if we have food to eat, then we cook - but if we don’t, we have nothing to do. We just stay here in the camp.

If we want anything for our children, we cannot give it to them. We can’t afford school, there is no playground. The children are with us all of the time

"Life is difficult for us here. We don’t have water, food or detergent to wash our children’s clothes. At home they could go to school, they had a playground."
maira modu30-year-old mother of six, from bama in nigeria, now living as a displaced person in maiduguri

It’s very difficult to sleep at night. Nine of us sleep in this shelter and there is not very much space. Some of us sleep outside.

We would like a blanket, shelter, food and to go back to our community. We would like people to know about the hardship that we face.

Life is difficult for us here. We don’t have water, food or detergent to wash our children’s clothes. At home they could go to school, they had a playground.

We know that our home has burnt down, like most of the homes in our village.

But we still want to go back when it is peaceful.

The need for food assistance is likely to increase even further from March, when stores from this year’s low-yielding harvest run out, marking the start of the annual lean season.

As well as easing hunger, adequate nutrition gives people the best chance of fighting infections such as malaria and diarrhoea, which are more prevalent during the rainy season (which begins in June).

“There is a lethal interplay between the lean and rainy seasons,” says MSF’s Dr Javed Ali. “Just as people’s immunity falls as nutrients in their diet decrease, the number of infections rises.

"This is particularly difficult for children and can leave them very vulnerable to developing severe malnutrition with complications.”

From June until October this year, this vicious cycle had deadly consequences for hundreds of our patients in Maiduguri alone.

In November, as the rainy season subsided and patients’ medical conditions became less complicated, 21 out of 250 children admitted to the ITFC died.

“During the summer, we were overwhelmed by the number of malnourished children with severe complications who needed treatment,” says Dr Javed. “Even though seasonal factors have now brought some respite, it does not mean that the emergency is over.

Without a significant scale-up from national and international aid organisations, the situation could be even worse next year as millions remain displaced by the conflict.”

“We left our home in Abadan two years ago with just the clothes on our backs. At around five in the evening, insurgents came into our town and started shooting. Everyone panicked. We were so scared that we didn’t have time to pack anything. We left everything, even the produce that we had grown.“ Hauwa Abba, 55, was @forcedfromhome following an attack, and has been living in a camp in Maiduguri, Nigeria, with her family ever since. They were one of 500 families to receive a food distribution from MSF on 14 December 2016. © Malik Samuel/MSF #MSF #DoctorsWithoutBorders #Nigeria #Maiduguri #Abadan #mother #refugee #forcedfromhome

A photo posted by Médecins Sans Frontières (MSF) (@doctorswithoutborders) on Jan 4, 2017 at 8:52am PST

We are deeply concerned for the hundreds of thousands of people would could be living in areas of the state where aid agencies have not been granted access, who may not have food, water or medical care.

fInd out more about our work in nigeria