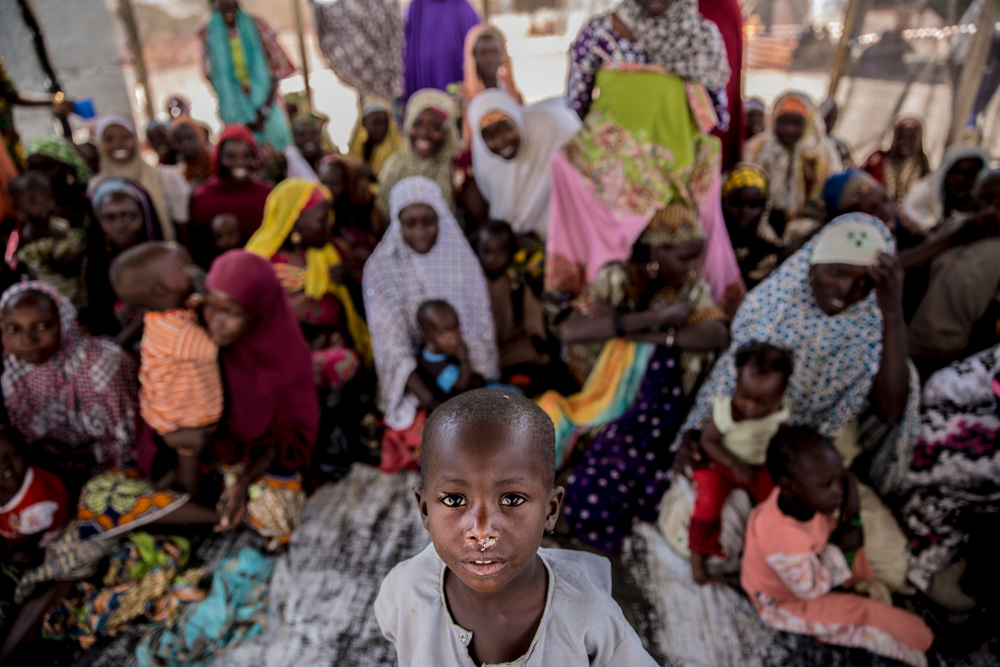 When Kaka's son was still a baby, Boko Haram drove her and her family out of their village. They came with guns.

"We fled to the forest to hide," remembers the 25-year-old mother of four. "They found us and detained us."

"My son and I were freed after 22 days, but they kept my three daughters.

For more than three years, the ongoing conflict between Boko Haram and the armies in the Lake Chad region has taken a heavy toll on civilian populations.

Many have fled their homes and left everything behind to find refuge in other villages and eventually across borders.

In Diffa, which is in southeastern Niger and borders Chad and Nigeria, there are according to the authorities more than 240,000 displaced people, the majority of whom have been driven from one place to another because of violence.

Juan Carlos Tomasi/MSF
Kaka at the mother and child health centre in Diffa. She hasn't lost hope of seeing her daughters again.

The consequences of an ongoing conflict

Despite relative calm and no major displacements for the past few months, the situation in Diffa remains extremely volatile. Sporadic attacks by Boko Haram and military operations have kept people on the move, seeking safety and hoping for peace.

Garba, who works as a watchman for Médecins Sans Frontières/Doctors Without Borders (MSF) in Garin Wazam – a site for displaced people located 58km from Diffa town – recalls the number of places he has passed through in the last three years.

“After I left my village in Cameroon, I moved about 15 times," he says. "First to Nigeria then to Niger; I had to leave one place after the other due to repeated attacks."

Juan Carlos Tomasi/MSF
Three years ago, Garba, from Cameroon, fled Boko Haram. After losing his family, he now works as a guard at the Garin Wazam camp for MSF and receives free mental healthcare.

Because of the constant moving, Gabra made the decision to send his wives and children to Chad, where he thought they would be safe.

"On their way, when they were travelling in a canoe, they were attacked by a Boko Haram group," he says. "I was told that my entire family had their throats cut.

"It happened in the middle of the day. That’s all I know.

"I couldn’t even say goodbye to them.

He now receives free mental healthcare from MSF within the camp.

"I speak to the psychologist a lot," he says. "We talk about being displaced, all the violence, the fear of Boko Haram returning, how hard I find it to sleep at night.

"Without his help, I think I would have gone mad."

Garba is one of many people in Diffa who have experienced the devastating consequences of this conflict.

The pressure on the host communities has also dramatically increased. An estimated 100,000 people now live in a situation of extreme vulnerability as they lack food, water, proper sanitation infrastructure and access to natural resources.

The conflict has also impacted agricultural and livestock activities around the Komadougou River, at the border with Nigeria, and on the shores of Lake Chad, taking away a very important source of socio-economic activities from these populations.

In Diffa, the security measures put in place by the authorities because of the conflict have also been wreaking havoc on commercial activities. Trading goods such as fish and some vegetables is still forbidden, as is travelling by motorcycle. Both activities are important to earning a living.

Medical care for the most vulnerable

Despite the presence of a large number of humanitarian actors in Diffa, a lack of management and coordination has led to many basic needs remaining unmet. Families living in sites for displaced people struggle to access sufficient water, food and sanitary infrastructures.

Distances and security measures are making access to healthcare a daily challenge, and people are also being charged for medical consultations, laboratory tests and medicines. Highly vulnerable populations cannot afford to pay for these services.

MSF is therefore supporting primary, reproductive and mental health care together with vaccination and nutritional screening activities in eight health centres in the districts of Diffa, Bosso and Nguigmi.

Our presence can make a difference to the most vulnerable, both displaced and local populations.

“Toumour is 80km from Diffa town and has become isolated due to the conflict,"  explains Audace Ntezukobagir, emergency coordinator for MSF in Diffa. "As a result, people there lack food, water and work.

"However, on average around 3,900 people per month benefit from medical consultations we are providing for free in the health centre, together with the health authorities."

Acute respiratory infections account for a large number of outpatient medical consultations, especially during the first months of the year. Women and children are especially vulnerable.

“This is clearly linked to the arid climate of the region, especially during the dry season, and the poor living conditions of our patients," says Audace Ntezukobagir. "People also suffer from diarrhoea, which is partially explained by the poor quantity and quality of the water available."

It still remains for the authorities and the humanitarian actors in the region to provide adequate water and sanitation infrastructure to the displaced populations.

This need was recently highlighted again by the recent outbreak of hepatitis E.

The vast majority of the displaced people in Diffa have experienced very traumatic situations linked to conflict.

MSF is currently supporting them by providing individual mental health consultations, psycho-education sessions as well as support at community level. Group sessions also started at the beginning of this year.

Juan Carlos Tomasi/MSF
People wait to be seen at the Garin Wazam site.

“Our group sessions are composed of displaced and refugee women, all victims of the conflict," says Yacoubou Harouna, MSF psychologist in Diffa. "The discussions aim at breaking isolation, sharing common experiences and finding solutions together.

"The main objective is to cope with the distress caused by similar traumatic events.”