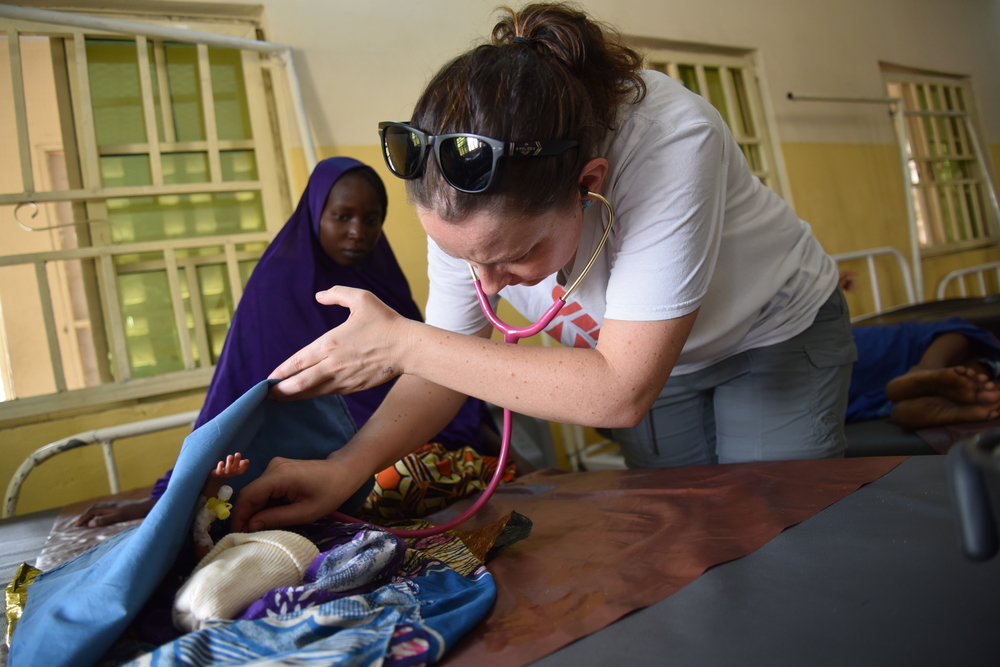 My work overseas as an MSF midwife

Working in developing contexts had been a career goal for New Zealander midwife Jacqui Jones, so when a position came up with MSF she was quick to sign up.

“Part of my inspiration for choosing nursing then a midwifery career was so that I would be an asset in countries that needed it. This was the right fit for me after learning about MSF’s values and objectives. The organisation treats anyone in need of medical care, regardless of their societal standing, political views or ethnicity.”

With MSF, Jacqui also found herself drawn to the opportunity to fulfil mentoring and teaching roles and empower local staff.

Over the past three years, Jones has worked in Afghanistan, Nigeria, and most recently in Bangladesh where almost 700,000 Rohingya have sought refuge since August 2017.

Jones was part of a team responsible for setting up a “Women’s Health Room” in a newly built clinic in the Tasnimarkhola settlement south of Cox’s Bazar.

Established to provide antenatal and postnatal care, family planning, sexual violence and safe abortion care, the clinic’s generic offering made it easier for women to visit.

The most difficult part of the process for Jones was stepping into the role of sexual violence advisor: “This assignment was personally challenging.

“As a midwife, I’ve always been somewhat scared of the sexual violence space. In medicine, there are lots of things you can offer an opinion on, but not in this case. It’s personally challenging.

“You have to be emotionally strong and empathetic to the fact that it’s difficult for women to share these traumatic stories. Despite how difficult it was, it hasn’t deterred me from working in this area, in fact it’s made me more passionate.”

The team offered psychological first aid, medication and vaccinations to women who had been sexually assaulted or abused. But, as Jones explains, “it emerged that what women needed most help with was contraception.

“We saw women of all ages but many were 18-year-olds, usually because they had already had a baby within the two years beforehand, and didn’t want another baby just now.

“A lot of them were just coming in to get their next dose, to continue whatever they’d been taking before.”

Jones understands that being a midwife with MSF isn’t always easy.

“I’m not sure you can ever be prepared for it professionally. You will inevitably find yourself treating patients and conditions that you have only ever experienced in medical books."
Jacqui JonesMSF midwife

“The biggest challenge is not having many diagnostic tests. When I was in Nigeria, we were sending people to get ultrasounds, that were not always accurate. I had scans reporting ‘no cardiac activity’, and then a healthy baby was born hours later.

“Of course, the situations are tough. The worst cases are when you know the patient would have survived if they were brought into an emergency department back home. It can make you feel very helpless.”

At the same time, Jones adds that her Bangladeshi team’s drive and persistence, despite their own personal struggles, is the motivation that keeps her going. “It’s a humbling environment.”

Jones has also had many highlights, like the time she was in an MSF hospital in Borno State, Nigeria.

“I had two sets of twins and one set of triplets delivered in the same week! Typically, the births were not without complications (only one of the seven presented head first, and two of the mothers had large bleeds afterwards) but all of them were discharged in a healthy condition.”

Accepting that working in these contexts is different medicine to back home is part and parcel of the role, says Jones.

“For the most part, you are dealing with the same medical conditions, just in a severe state. Pre-eclampsia, premature labour and severe bleeding can affect any pregnant woman. However, there are different ways of screening and treating depending on which country you are in.”

Jean Christophe Nougaret/MSF
Fanne, 17, rests with her premature baby on her stomach after Jacqui helped her to give birth.

For others looking to work overseas, Jones says the best way forward is to set realistic expectations from the get-go.

“I’m not sure you can ever be prepared for it professionally. You will inevitably find yourself treating patients and conditions that you have only ever experienced in medical books.

“Personally, you need to be in a good head space, and accept that the work is tough and often with long hours.

“However, it is very rewarding and your colleagues keep you grounded, offering support and a special bond you will never replicate in any other working environment."