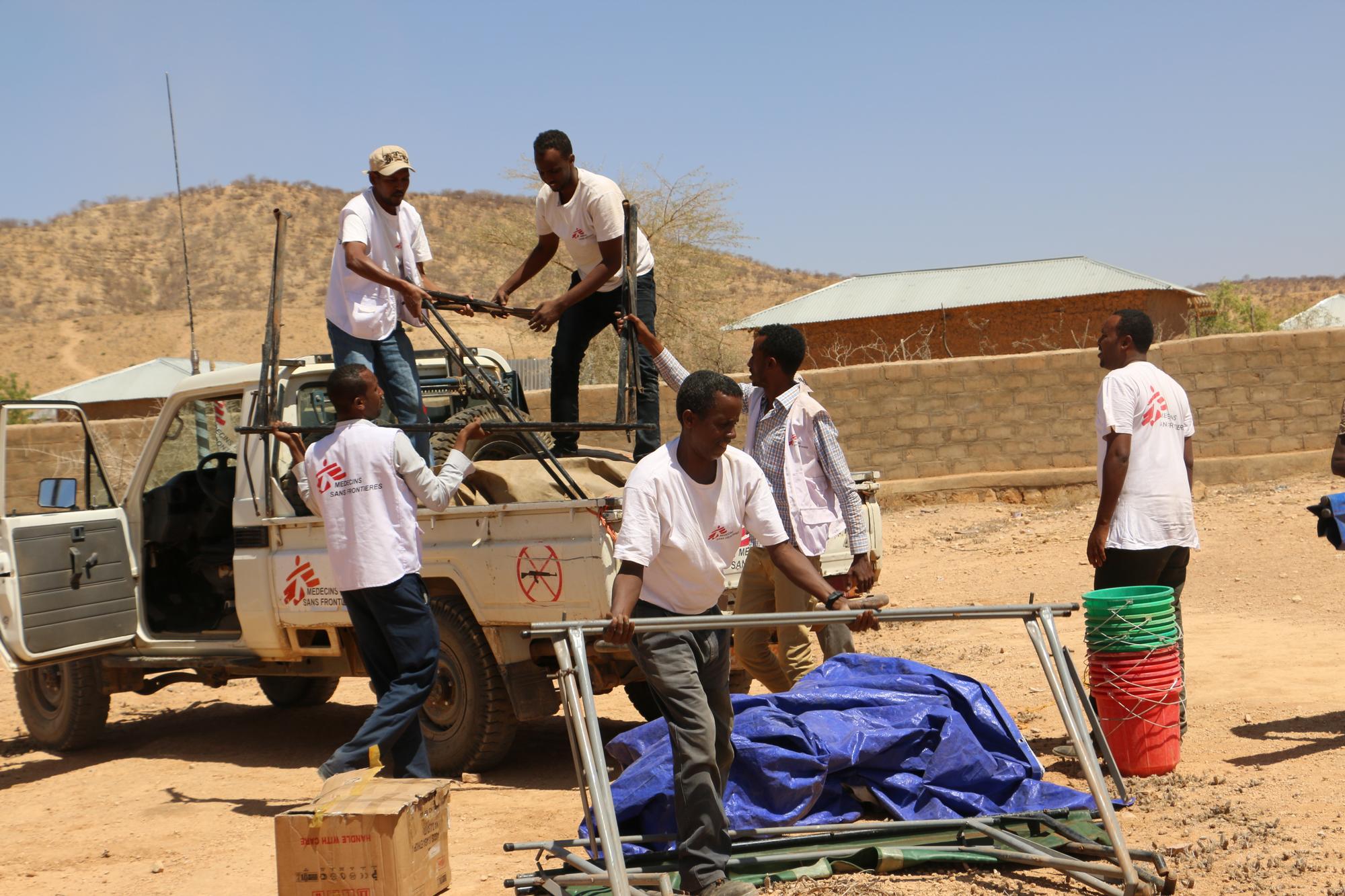 The region where I’m working has missed the last three rainy seasons and is facing high malnutrition rates due to the drought.

Traditional water reservoirs have dried up with the lack of rain. More than 400,000 people in the region depend on 18 submersible pump wells, three of which support Wardher. Trucks have become the main method of water distribution to various camps and villages, yet roads are not always accessible.

Alexandra Chen/MSF
People's herds of livestock - including camels and goats - have died as a result of the drought.

Most people are now living on two litres of water per day or less; the WHO (World Health Organisation) and MSF recommend 15 – 20 litres of water per person per day. This water is used not only for drinking, but also for basic hygiene needs and cooking. Bathing and laundry require even more water.

In March, acute watery diarrhoea broke out in Wardher. It's caused by bacteria transmitted via the faecal-oral route, usually through contaminated hands.

Symptoms can begin after a few hours and last up to five days. Although symptoms are usually mild, one in 20 people infected develop severe vomiting and diarrhoea leading to extreme dehydration, shock and death. The most vulnerable people are the elderly and children under five years of age.

I just flew for 48 hours to get from western Canada to eastern Ethiopia, so I feel great! (It’s 3am and I’m ready to start my day).

I’ve been assigned to work in the AWD treatment centre in Wardher. During the peak of the outbreak, the centre saw more than 50 new admissions per day with a daily average of 150 patients being treated.

Alexandra Chen/MSF
Clean rubber boots are lined up ready for watsan staff to put on as soon as they arrived for work.
This week I helped improve the treatment centre in case the outbreak peaks again; currently there are between 25-35 patients.

I upgraded the toilet structures and expanded the laundry area where hygienists wash contaminated blankets and clothes. We built an area for the kitchen hygienists to wash dirty plates and store them in a clean environment to reduce the risk of contamination.

We dug trenches around the toilets and showers to collect and contain any waste runoff. And then we expanded the chlorine solution preparation station.

Alexandra Chen/MSF
A hygienist cleans vomit and diarrhoea buckets with a concentrated solution of chlorine. Hygienists wear gloves and aprons to protect themselves and to reduce the risk of spreading the bacteria.

For this emergency project, MSF constructed smaller versions of treatment centres in some of the surrounding towns and camps for displaced people.

This week, I visited the treatment unit in the town of Wal Wal, which is 30 minutes northeast of Wardher.

On entering the unit, I was greeted by a large tree resembling the shape of an umbrella. Beside the tree was a clean, yet empty, large tent.

However, surrounding the tent were a dozen blue mosquito nets strung up by twigs from the central tree and nearby bushes. The patients, all elderly or children under five, rested on mats with IV bags hung from the branches.

Despite having fewer resources compared to the main treatment centre, the outreach unit was running efficiently. There was a vomit pit for fluids and a pit for burnable waste, a latrine, and hand washing and oral rehydration points.

Alexandra Chen/MSF
A hygienist sprays a bed to disinfect it after a patient has been discharged. The beds have holes in them with buckets underneath for patients who are too weak to reach the latrines.
While we were inspecting the water, hygiene and sanitation needs of the unit, we noticed four children who looked extremely sick and malnourished.

We called an ambulance to take them to the main treatment centre in Wardher, which also has nutritional support.

I’ve been adjusting well to Wardher life and my role managing the WATSAN staff at the AWD treatment centre.

The team is composed of locals from the region who work various positions such as disinfection sprayers, chlorine solution technicians, guards and hygienists.

The weakest solution (0.05 percent) is for hand washing at the entrance and exit of all the tented wards, latrines and waste area, as well as for disinfecting plates used by patients.

Next is a slightly higher concentration of chlorine solution (0.2 percent), which is used to disinfect floors, beds, latrines, laundry and the soles of shoes when entering and leaving areas of contamination.

The highest concentration of chlorine solution (two percent) is used for disinfecting vomit and diarrhoea buckets, as well as the bodies of the deceased.

The inevitable has happened. I have diarrhoea. Even though I’m dancing between bed and the toilet, I’m thankful that it isn’t acute watery diarrhoea. I’ll be back on my feet soon.’