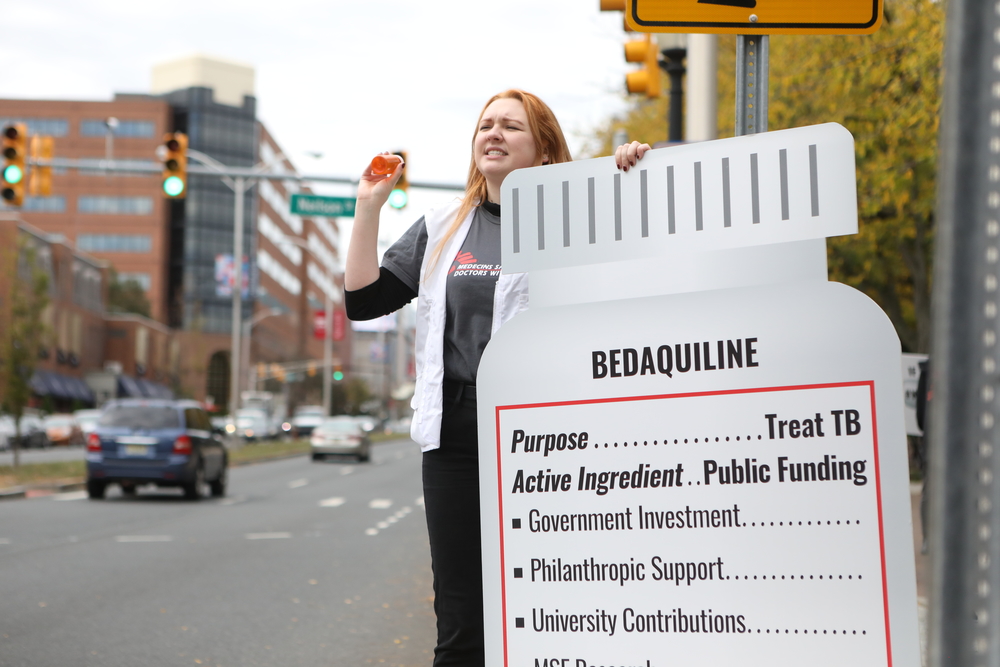 MSF joined tuberculosis (TB) activists to disrupt the opening ceremony of the 50th Union World Conference on Lung Health in Hyderabad today. The activists urged pharmaceutical corporations to make improved drug-resistant TB (DR-TB) treatment affordable and available for hundreds of thousands of people around the world who desperately need it.

For the first time in over half a century, there are three new DR-TB drugs – bedaquiline, delamanid and, most recently, pretomanid – that can offer people a better chance to be cured. Still, barriers to access, including high prices, are preventing their scale-up by countries.

Only 20 percent of people with DR-TB who need these newer drugs have been able to receive them.

According to the latest World Health Organization (WHO) Global TB Report, in 2018, an estimated half a million people fell ill with DR-TB, yet only one in three started treatment.

"Bedaquiline, delamanid and pretomanid have shown the potential to cure more people of DR-TB with far fewer side effects than older toxic treatments that need to be injected and are still used in most countries," said Sharonann Lynch, HIV & TB Policy Advisor for MSF’s Access Campaign.

"It’s inexcusable that drug corporations continue to put profits over people’s lives, as if medicines were a luxury. It’s time to smash the status quo: all three newer TB drugs must be affordable to everyone who needs them so more lives can be saved," she added.

Getting to an affordable price for these new drugs is critical since treating DR-TB requires a combination of four or more medicines.

MSF demands this price cut considering that bedaquiline is the result of a joint research and development effort by public and private entities, and the broader TB community — not by J&J alone.

Since its approval for use in 2014 and until two months ago, fewer than 3,000 people have ever been treated with delamanid. It is one of the most expensive DR-TB drugs, which its producer, Otsuka, prices at £1,320 for a six-month treatment course (£219 per month).

Estimates suggest that delamanid could be produced and sold for a profit for as little as 12p per day (less than £3.80 per month). MSF urges Mylan and Otsuka to lower the price of the drug much further for all countries and calls on Otsuka to issue a non-exclusive license to the MPP to encourage multiple generic manufacturers to produce more affordable versions of the drug.

In August 2019, the US FDA approved the use of a three-drug regimen BPaL (bedaquiline, Pretomanid and high-dose linezolid) for people with XDR-TB and MDR-TB. TB Alliance, a not-for-profit organisation, developed Pretomanid, and in April 2019 was licensed to pharmaceutical corporation Mylan to manufacture.

It is estimated Mylan will charge £282 for a six-month treatment course (£47 a month). It has been estimated that generic versions of pretomanid could be produced and sold at a profit for as little as £0.28 a day (less than £9 per month). MSF calls on the TB Alliance to make the drug affordable for everyone who needs it.

More on our work with Tuberculosis >