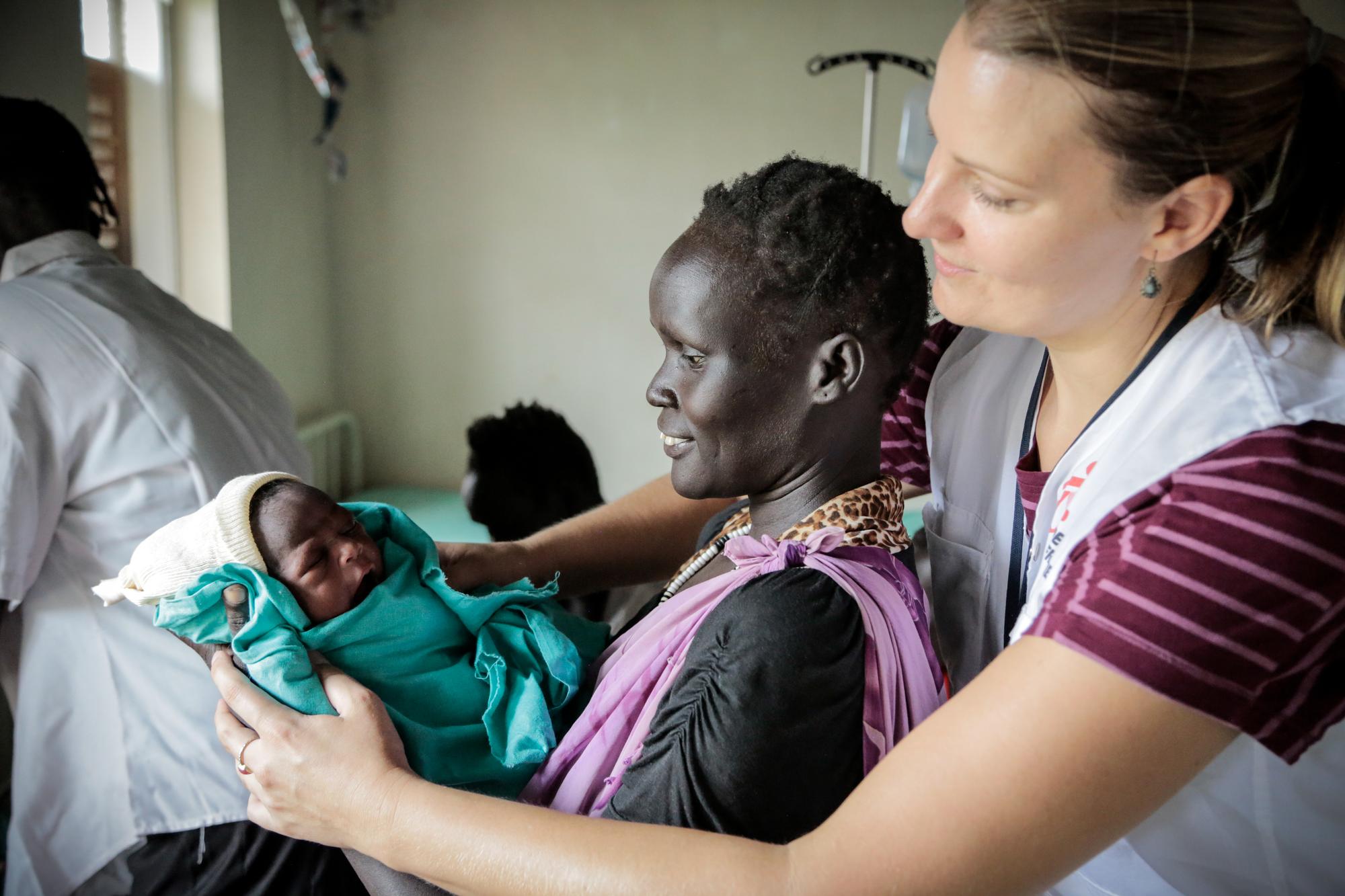 For me, the latter was the least familiar. As general surgeons, we don’t get that much training in obstetrics and gynaecology anymore.

I did my first caesarean section in the field in Agok, during my first mission with Médecins Sans Frontières/Doctors Without Borders (MSF).

They call the place ‘Agok Paradise’. In many ways it is.

I joined an experienced surgeon in the field, and he kindly showed me the ropes. C-sections are not that complicated, if everything goes as planned.

As any medic knows however, things don’t always go as planned.

There was a 32-year-old lady who came to Agok hospital complaining of abdominal pain. Her pregnancy was estimated to be full term.

"Generally speaking, a baby cannot come out sideways. It has to be head or feet first. It’s a matter of simple physics."
shadi abdelrahman

The woman came from a town that is a few hours away, and she hadn’t seen a doctor during the pregnancy, which is not uncommon, especially if it was generally uneventful.

She had no major problems during this pregnancy, although she had previously had a miscarriage, and was now concerned about the pain.

She did not look generally well.

"That doesn't make any sense"

She was tender on the right side of her abdomen, with what seemed to be a hard mass under her ribs.

However the foetal heart beat seemed to be strong – a good sign. An ultrasound was done, and it showed that this 'mass' was the foetal head. The fetus was in ‘transverse lie’ – which means it was in a sideways position, lying across the woman’s abdomen.

Generally speaking, a baby cannot come out sideways. It has to be head or feet first. It’s a matter of simple physics.

The lady, being in pain and not generally well, had to deliver as soon as possible, and because of the position of the foetus, it had to be a C-section.

"I try to see the upper end of this 'mass' only to find what I think should be the gall bladder. Only, it's crying."
shadi abdelrahman

We start, as usual, with a transverse lower abdominal incision. We see the uterus, but to our surprise it seems to be a normal size, non-pregnant uterus.

“That doesn’t make any sense”, I thought.

I could feel the baby across the abdomen before we started. Above the uterus, there’s a mass that I didn’t, at first glance, recognise. But, this being the situation, we decide to extend our original incision upwards: now it’s T-shaped.

I try to see the upper end of this 'mass' only to find what I think should be the gall bladder. Only, it's crying.

Now it hits me. This is an abdominal pregnancy.

"She dodged a bullet"

This is a foetus that has developed entirely outside the uterus.

Needless to say I have never seen it before, nor has my more experienced colleague. I’ve read about it in books. Even then, there is never a photograph, it’s usually a drawing of what it might look like.

To put things into perspective, pregnancy outside the uterus, or ectopic pregnancy, accounts for one to two percent of all pregnancies. Most of the time, it’s in one of the fallopian tubes.

Only one percent of ectopic pregnancies grow in the abdominal cavity as abdominal pregnancies. And even a smaller proportion of those reach full-term. It is a very rare occasion.

When discovered earlier during pregnancy, it is usually terminated because it carries a great risk to the mother, and a high rate of foetal deformities. In our case, in a field hospital in this part of the world, there was no chance for this to be picked up earlier.

The crying gall bladder was the head of the baby. The mass above the uterus was the placenta.

We got the baby out, and we carefully removed as much of the placenta as possible without causing bleeding.

The baby was crying, which is always a nice sound to hear. The mother seemed to be doing well, too.

She had dodged a bullet.

At any time during this pregnancy, things could have gone wrong. But she made it to the end, and we were there to witness it. This is a rare occasion for any gynaecologist, not to mention a general surgeon. A happy occasion at that.

Over the following couple of weeks, we had to keep a close eye on both of them. The mother was still at risk of bleeding or infection that could be life-threatening.

Considering that this is a field hospital, we don’t really have the same tools to monitor a risky patient. We have to depend largely on our clinical sense, and hope that everything goes well. And it did.

Mum and baby shortly before being discharged

The mother recovered well from her surgery, and the baby seemed to be developing well too. In a couple of weeks, she was ready to be sent home with her baby. Follow-up visits were planned, and on the first one a month later, they both seemed well and happy.

There are things that only come once in a life time, and this is certainly one of them. It would have been an extraordinary story, even with a different outcome.

But a happy ending is much better.

fInd out more about maternal health