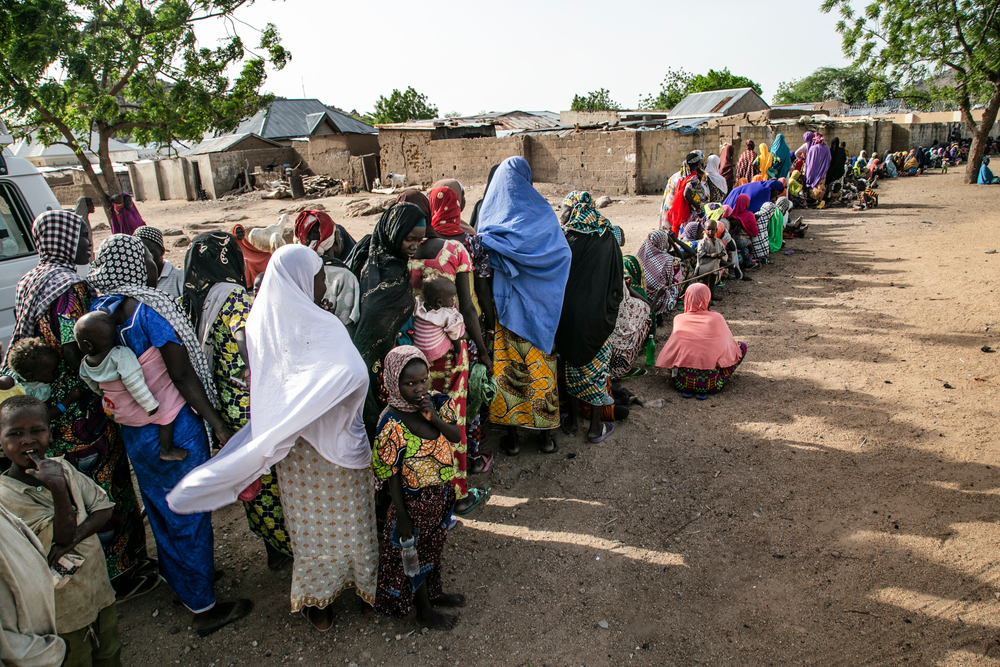 Around 17 million people in the Lake Chad region live in areas affected by violent conflict between non-state armed groups and military forces. Across Cameroon, Chad, Niger and Nigeria, MSF has witnessed an increasing need for mental health support for those living amid the violence, as well as the 2.3 million people forced to flee their homes.

An important part of MSF activities in the region is aimed at reducing psychological suffering for people caught in the conflict. Many are in need of psychological support having experienced violence, witnessed atrocities, or lost family members and belongings, whether as a displaced person, a refugee or in their local communities.

Even in places where violence may have decreased, the consequences of displacement, hopelessness and despair continue to affect people’s lives and can lead to chronic mental health problems.

Nigeria has borne the brunt of the Lake Chad conflict. Almost eight million people living in north-eastern Nigeria are heavily dependent on aid for their survival, including 1.6 million people who have been displaced from their homes.

In Pulka and Gwoza towns, where MSF primarily operates in transit camps, our teams offer psychological first aid to the newly-arrived.

“Being forced to leave and settle in a new environment without knowing for how long is very destabilising. Individuals face losing every physical, social and material landmark. They need to rebuild their lives from scratch and learn everything again.”
Yacouba HarounaMSF pscyhologist

Patients are mainly women whose husbands are often missing. These women have no choice but to leave their homes with their children, seeking security and humanitarian aid; their husbands have been killed, are suspected to belong to armed groups or are indeed fighting with these groups.

We are also treating an increasing number of children and adolescents. For them, mental healthcare is particularly important to avoid future psychological complications.

In Diffa, across the border in Niger, MSF has provided mental healthcare since July 2015.

Here, our team shares similar concerns. Due to the surrounding conflict and difficult living conditions, people live in a constant state of insecurity and distress.

They see many patients with symptoms of depression, anxiety or post-traumatic stress disorder. Adults may feel guilt, low self-esteem and become isolated. Children may show regression behaviour, while adolescents adopt at-risk behaviours such as drug and alcohol abuse.

“Being forced to leave and settle in a new environment without knowing for how long is very destabilising,” says Yacouba Harouna, a Nigerian MSF psychologist working in Diffa.

“Individuals face losing every physical, social and material landmark. They need to rebuild their lives from scratch and learn everything again.”

Achieving that is hard work, for which people might need psychosocial support.

Many former fishermen or herdsmen from the Lake Chad islands came to Diffa.

They were used to being among economic leaders, with social and political influence. But, having been displaced, they struggle to find ways to cope. They have to learn to earn a living through small business or by asking their children to work to prevent the family from going unfed.

“While people are moving, they also start to find appropriate coping mechanisms to regain routine and a sense of control in their lives,” says Ana-Maria Tijerino, an MSF psychologist based in Geneva.

“Not perfect or the same as before, but this is the resilience we are looking for in many of these communities.”

In Diffa, MSF teams have adopted a community-based approach to identify and address the mental health needs of those they support, in particular, young people.

Mental health outreach workers regularly visit community spaces, such as camps for internally displaced people, water points and schools to seek out children and adolescents in need of care.

Depending on their age and mental health concerns, patients are then referred to psycho-stimulation classes (drawing, dancing, story-telling, etc.), family consultation or talking group sessions.

In northern Cameroon, part of MSF’s activities is focused on mental healthcare for patients recovering from injuries as well as those suffering from malnutrition.

While it is not certain that children are more likely to be malnourished if their caretaker – usually their mother – is dealing with a mental illness, once their mental health needs have been addressed, improvements in the child’s health are seen more quickly.

Our mental health teams work to reinforce the bonds between caretaker and child, encouraging psycho-stimulation sessions to tackle the developmental consequences of malnutrition.

Caretakers are also offered a safe space to discuss their worries and symptoms, as many of them have been victims of the conflict as well.

In Mora, northern Cameroon, MSF psychologists have heard many women talk about the fear they feel.

They fear sleeping inside, after having spent many nights sleeping in the bush with their children, hiding from nightly attacks, or turning on the lights during the night, after spending nights without making any noise or movement.

MSF’s support can have a direct impact on how mothers build their relationships with their children.