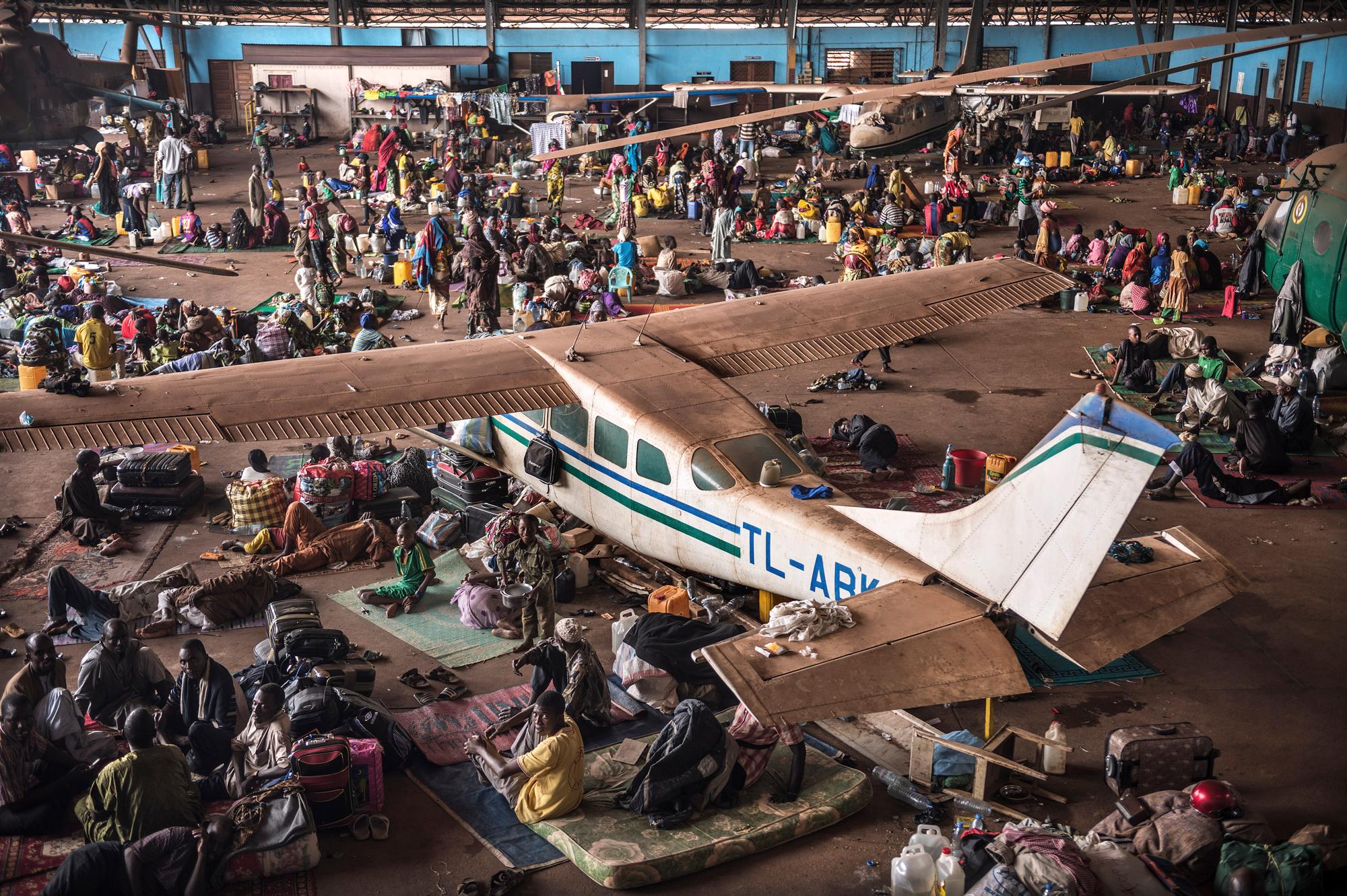 The brutal crisis in Central African Republic (CAR) has gone on largely unnoticed internationally. Except, maybe, for one iconic image: a sea of displaced people huddled in the hulls of abandoned, rusty planes.

This was Mpoko International Airport in the capital, Bangui.

At its peak, 100,000 people lived in this camp. Those who couldn’t shelter in the ruins of old aircrafts sought sanctuary in empty warehouses, or built roofs over their heads with whatever scraps they could gather.

Three years later, the international flights that land in Bangui do so next to empty land.

Bulldozers came and went, and most of the 20,000 people still living in Mpoko have returned to where they came from. Mpoko camp is now officially closed.

But this closure still matters. Here’s why:

1. Because the crisis is not over

The closure of Mpoko is good news: it is a sign of stabilisation in Central African Republic, a country where even the oldest citizens cannot remember more than very brief periods of relative stability.

But this closure remains largely symbolic.

The displaced people have little to return to: precarious safety, poor to non-existent infrastructure, and destroyed houses still riddled with bullets. Families of six are given €150 in cash to re-start their lives from scratch.

Countrywide, one in four people are still displaced, either inside or outside of national borders.

The camp’s closure was an official government priority for almost three years.

In September 2015, after a year of relative calm in Bangui, the camp’s population had dwindled to 6,000 people and Médecins Sans Frontières/Doctors Without Borders (MSF) was preparing to close its hospital and clinics.

But in just a few days the conflict flared up again, and thousands ran to the relative safety of the airport. Our hospital was flooded with people: the number of consultations rose from 250 to 400 a day.

So while there is some cause for cautious optimism, what the history of Mpoko camp tells us for certain is that tomorrow is uncertain in CAR.

The #camp at #Bangui #airport, sheltering tens of thousands of people from horrifying #violence, is an anarchic constellation of improvised tarp, stakes, mats and threadbare umbrellas. The luckiest #families squatting have dilapidated cabins, others sleep in the open, exposed to #mosquitoes and rain. Abandoned, the displaced people try to organise. A small market is taking place, but only the wealthy can find something to eat, and the savings are depleted. Single #mothers and pregnant women are most vulnerable. CAR 2013 © Samuel Hanryon/MSF #CARcrisis

2. Because our hospital is still needed

The Central African conflict reached horrifying levels of violence, with atrocities committed by both sides.

Our teams, who started providing medical support in Mpoko just one day after the first families arrived, witnessed horrendous acts such as dismemberments.

The living conditions in the camp were difficult for the traumatised thousands who sought refuge there.

But like anywhere else in the world, life and death happened side by side: 5,807 babies were born in MSF’s field hospital in Mpoko.

At the time of the camp’s closure, two thirds of the patients in our hospital in Mpoko were coming from outside of the camp; some were walking for hours to reach the hospital because there were no other free and reliable medical services accessible to them.

Now that the hospital is closed, they will need to rely on the often weak public services in Bangui. It is a reminder that CAR has not solved its deep-rooted problems.

Luca Sola
A man is brought to the MSF hospital in Mpoko camp. He was tied up and beaten by a group of men after asking for payment, having polished their shoes.

3. Because it was an international matter

On 4 December 2013, the UN security council and France separately vowed to take action to stop the intolerable levels of violence in Central African Republic. The wave of conflict had started in 2012.

One day later, Bangui fell into all-out war and the first people fled to Mpoko, seeking the protection of the UN and French troops based at the airport.

International troops have been central in the recent history of the CAR, for better and for worse: still unresolved accusations of sexual abuse by French and UN troops in the country remain an ineffable stain on their reputation.

Outside the mobilisation of military resources however, the country remains at the bottom of international priorities.

Despite the huge, glaring needs of a population in distress, there is not much appetite to provide basic services in such a dangerous and tense environment.

Apart from our healthcare, there were little services in the camp for three years. Mpoko was mostly a squalid place to live.

Mpoko, and indeed CAR, never saw the mobilisation of international aid at levels similar to other displaced people or refugee camps in the world.

4. Because it was, in a limited way, a call to action

Squalid, yes; forgotten, yes; but still – Mpoko camp was the entry point for the coverage of the terrible humanitarian crisis in the Central African Republic.

The displaced people lived right along the tarmac of the landlocked country’s international airport. It was, quite literally, the first thing you saw when you arrived in CAR.

Traveling across the country is difficult at the best of times, with precious little decent roads; not to mention highly dangerous during the crisis.

So, for visiting reporters and their readers around the world, Mpoko became the image of the underreported CAR crisis that may have been completely ignored without these iconic images.

Today, Mpoko has closed. The symbol of the huge needs of people has disappeared, but not the country’s problems.

Without it, how can the goodwill of donors, public and private, continue to be mobilised to help half of the population in CAR that still rely on humanitarian aid to survive?

5. Because, if you're an MSF donor, you helped

MSF's response in Mpoko was unique.

All of our teams still remember the extraordinary challenge of building a 60-bed field hospital in a matter of a few days, on a piece of land where there was nothing, and at the peak of an extraordinarily brutal conflict.

Our teams worked there every day, for a thousand days – international professionals alongside our courageous national staff.

All our Central African colleagues had suffered with their loved ones through the worst of the conflict, some of them even living in the displaced persons camp themselves.

They had lost everything, but continued to help.

Together we provided 440,000 consultations, 46,000 medical interventions in the emergency room, and admitted 11,000 inpatients in the temporary structure made of wooden planks and tarpaulin.

All this was made possible by the donations from private donors all over the world who support us.

On behalf of all of those patients: thank you.

The crisis in CAR is not yet over.

We remain one of the main health providers in the country, with 17 medical projects including a surgical programme and maternity ward in Bangui.

fInd out more about our work in central african republic