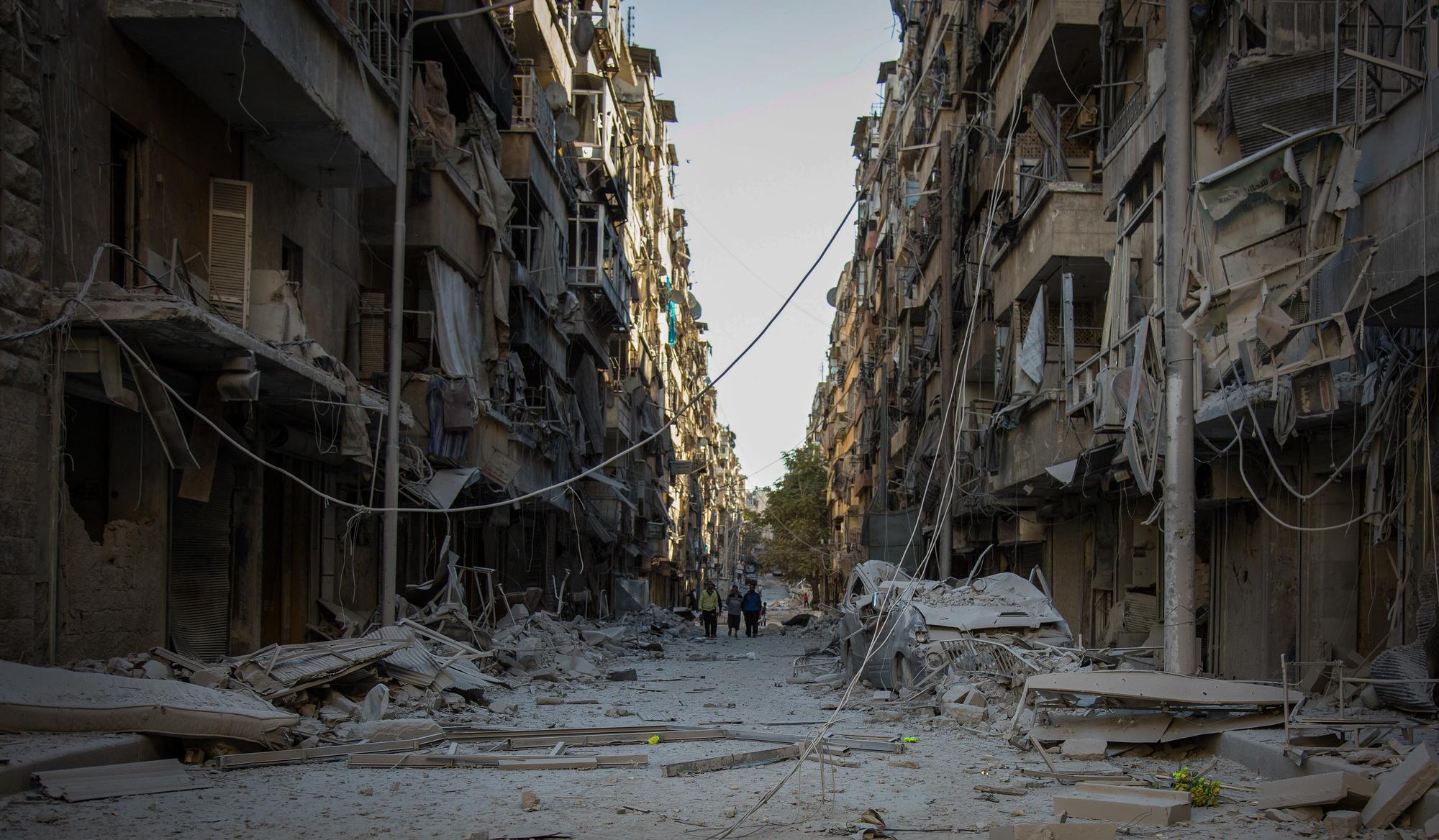 East Aleppo: "You can’t prepare for a bombardment like this"

Since airstrikes resumed on 15 November, people trapped in east Aleppo, Syria have faced continuous bombing from the sky and clashes on the ground. All of east Aleppo’s hospitals have been hit, putting them out of service.

MSF is in daily contact with doctors in east Aleppo, who report a desperate lack of medical services for the wounded.

Ambulances have been destroyed, roads are blocked with rubble, and movement around the city is very difficult.

MSF has 45 tons of medical supplies (drugs, consumables and medical equipment) and a number of ambulances ready to enter east Aleppo as soon as access can be secured. But despite our continual efforts to get supplies in, no access is currently possible.

We hear from a doctor in east Aleppo, who wishes not to be named.

KARAM ALMASRI/MSF
Dr Abu Wasim, a plastic surgeon, stands next to a damaged ward on the upper floors of a hospital in east Aleppo after it was hit by an airstrike in mid-October 2016. He is one of the 7 surgeons left in East Aleppo.

"Up until Monday 14 November, the situation in east Aleppo had been relatively quiet for some weeks, with just light shelling. But on Tuesday the situation suddenly escalated, with more than 100 raids and scary numbers of people wounded.

In just two hours, between 1 pm and 3 pm, 55 wounded people arrived at the hospital. We admitted 13 people, three of whom died; the rest we sent back home. The wounded have all kinds of injuries, from superficial wounds to limb and neurological injuries.

When there are massacres going on outside, and large numbers of wounded, we stop everything else to concentrate on treating the injured. Non-urgent operations can be postponed, until the shelling has stopped or the surgeon has more time.

When it’s quieter, we can monitor patients for longer, but in bad situations like now, we have to discharge them an hour or two after they’ve been operated on.

"We're running out of supplies - but when you have wounded patients, you can't save medication for later. Treating people's injuries is more important than anything else."
anonymous doctorhospital in beseiged east aleppo

The most vulnerable patients are the ones with head wounds and neurological injuries – 70 to 80 percent of them end up dying.

We see a lot of people with limb injuries, but usually we can’t do anything for them, and it ends in amputations. There’s too little time, and too few doctors, operating theatres and medications. We don’t have many options.

On Tuesday, one shell fell about 20 metres away from the hospital, but we weren’t hit. In the past five months, we’ve been targeted five times: once in June, twice in July and twice in September.

Each time, we shut down for a few days, to do essential repairs and clean the place up, and then we reopen our doors.

Frankly, you can’t do much to prepare for a bombardment like this. Early last summer we started to excavate under the hospital but, when the siege started, we couldn’t get hold of building materials, so we had to stop.

We began to build a wall around the hospital, too, but we haven’t been able to finish that either.

KARAM ALMASRI/MSF
A nurse checks the blood serum of Mohamed, who was injured by mortar shells fired on the east Aleppo neighborhood of Salaheddine in late October 2016.

Our generators are all far away from the hospital, in a relatively safe place below ground level, but the fuel to run the generators is about to run out.

Some medications – such as those for chronic diseases – are already finished. Some painkillers and antibiotics are beginning to run out too.

As the intensity of the bombing increases and the massacres become more frequent, we are seeing more and more patients. Thus, we are getting through supplies faster.

When you have wounded patients, you can’t save medication for later. Treating people’s injuries is our first priority and is more important than anything else.

We hoped that the current stocks would last for 10 days but, if the bombardment is particularly violent, they won’t last for more than three or four days.

Sadly, we will be able to do nothing when our supplies run out. But for now, we are doing what we can."