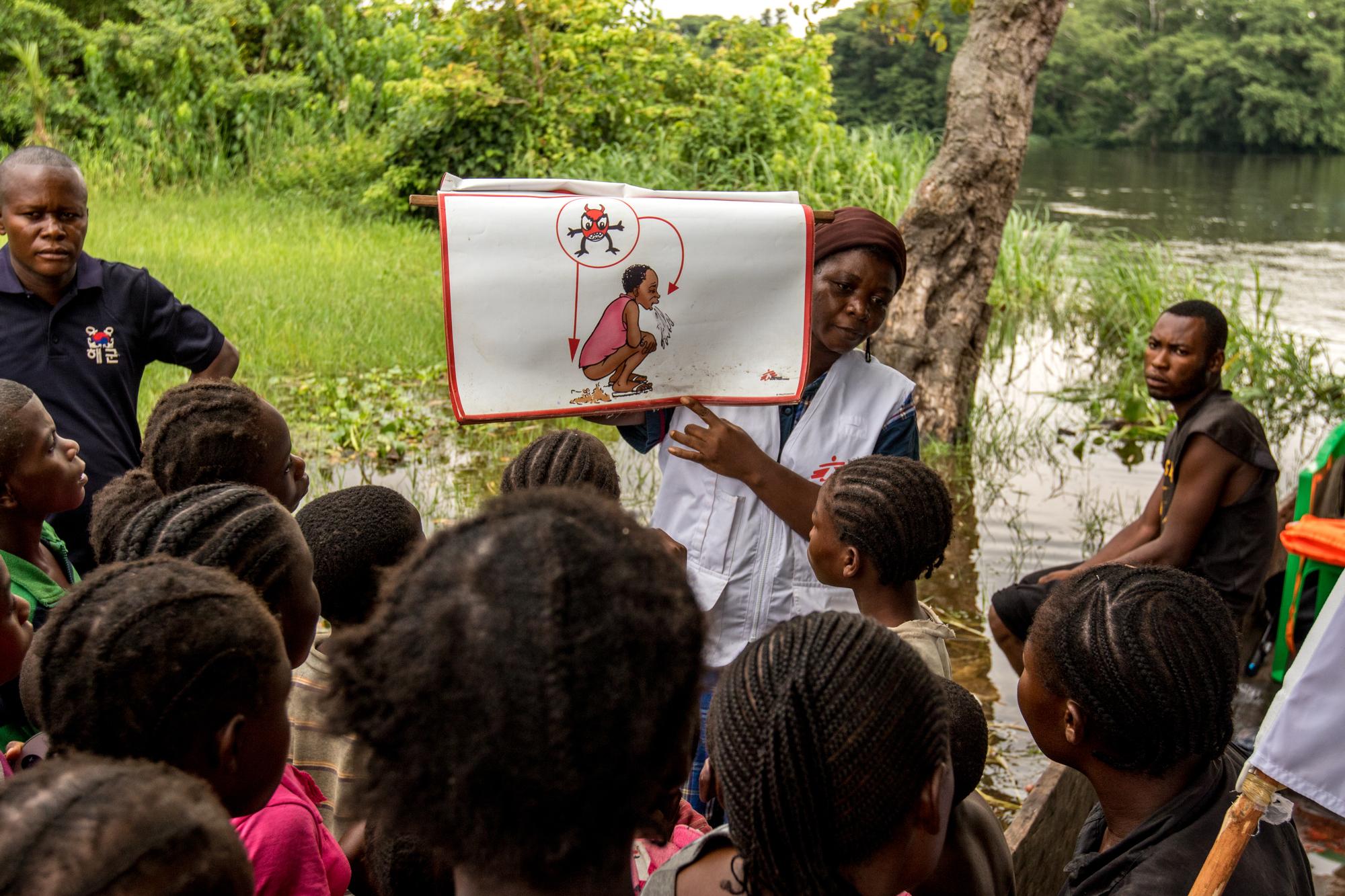 Justin is a British doctor currently on his second assignment with MSF. Here, he blogs about meeting a patient with cholera, a disease which is relatively simple to manage but which kills up to 130,000 people a year due to lack of access to medical care.

My torch lit up the dirty floor of the isolation room, smudged with mud and chicken droppings. Three beds were pressed against the walls; thick, grey plastic sheeting stretched over sturdy, low-set wooden frames. Each bed had a hole cut into the middle, beneath which a bucket would collect the watery diarrhoea that is typical of cholera.

One man was lying on a bed in a dark corner, he was covered by a thin blanket and above him hung two empty bottles of intravenous solution.

We were in a small village on the east bank of the River Congo. In the past month this village, and a dozen others nearby, had reported a sudden rise in unexplained deaths from diarrhoea.

This time last year a cholera epidemic had swept along this part of the Congo River causing thousands of cases and dozens of deaths. The rains which had brought the epidemic last year had just started again and so we arrived expecting to find cholera.

Borja Ruiz Rodriguez/MSF
A canoe makes its way down the River Congo. June 2 2016.
We were a small team and our job was to quantify the scale of the outbreak while also assessing the capacity of the health system to respond. We were in the middle of a late-night team meeting when I was called to the clinic to see a patient.

When Amisi first arrived he was not particularly unwell. He’d had some diarrhoea earlier that morning but he had been sitting up, smiling and drinking the salty rehydration fluid that he had been given by the nurses.

Cholera is not a complicated disease to manage. It’s not tuberculosis or malnutrition or HIV. It doesn’t need expensive tests or long-term treatment. At its most basic cholera medicine is replacing the lost fluid while you wait for the infection to pass, which normally takes a couple of days.

But the simplicity of cholera belies its danger.

A few weeks earlier I had been working on much larger cholera outbreak in a small mining town 400 km away. It was noon on the first day when I heard shouts from outside as a woman was carried towards a bed. The diarrhoea had started only a few hours earlier but it had been relentless and by the time she arrived she was unconscious; she was so dehydrated that her heart could no longer pump enough blood to her brain.

"Left untreated cholera kills 50 percent of its victims, but that drops to less than one percent if people can access medical care in time. And after just a few days of treatment the transformation can be dramatic."

I couldn’t find a pulse at the woman's wrist - she was impossibly cold despite the heavy tropical heat - but I could a feel a weak pulse at her neck. We found a vein and started to squeeze through a bag of fluids. But it was too late; her pulse disappeared and her shallow breathing stopped. There were moments of frantic activity, but we couldn’t do enough.

She died less than five minutes after arriving.

When I looked at Amisi that night, I was thinking of that lady.

Amisi had gone from the smiling man I had seen just hours earlier to a figure groaning softly in the dark. His eyes had sunk back into his head and were staring up at the ceiling. Every so often he would sit bolt upright and reach out wildly towards us, only to flop exhausted back onto the bed. His skin had the consistency of thick rubber and would slowly seep back into place when pinched.

The bucket beneath Amisi's bed was full of pale, watery stools. It was a vicious spiral; the more fluid he lost the weaker he became, and as he grew weaker he could not drink enough water, so he became even more dehydrated.

When it comes to cholera, educating communities is just as important as treating patients. During outbreaks health promoters visit schools, churches and markets to spread the message about how families can protect themselves against cholera and what to do if they do develop diarrhoea. The first message can stop the spread of an epidemic by encouraging people to wash their hands and to safely dispose of waste. The second message can literally save lives by encouraging them to seek help as soon as they develop diarrhoea.

Borja Ruiz Rodriguez/MSF
Medecins Sans Frontieres (MSF) Health Promoter, Faida Kanyombe, during a health promotion session about Cholera for the population of a small village along the River Congo. June 2 2016.
Left untreated cholera kills 50 percent of its victims, but that drops to less than one percent if people can access medical care in time. And after just a few days of treatment the transformation can be dramatic.

People too weak to stand one day are walking around the ward the next. Bodies left crumpled and desiccated by constant dehydration bloom back to life after a simple intravenous drip. Without the work of the health promoters and the active engagement of local communities many of these patients might have died.

Even though Amisi’s situation was serious, he had come to the clinic early and by the time I arrived the nurses had already started him on a drip which had slowed the rate of his deterioration. We placed a larger catheter into a thicker vein and started another bag of fluid running as fast as possible.

After 20 minutes Amisi’s breathing had calmed down and he could answer questions. By the end of the hour he had been given almost three litres and we had slowed down the speed of the infusion.

Before I left for the night, my torch light picked out Amisi sleeping quietly while the nurse watched the rest of the saline solution drip steadily into his veins.

We still had to leave the next morning. There were other villages that had reported suspected cholera cases and each needed to be investigated.

Before stepping onto the boat I went back to visit Amisi one last time. He was sitting up again, chatting with his wife and tentatively eating some rice for breakfast. I sat down with the medical team to go over the cholera protocols again, and made sure that they had all the drugs and equipment they needed.

As our boat left the riverbank and made its way upstream I knew that Amisi wasn’t out of the woods, but I hoped that he was over the worst.

find out more about our work in drc