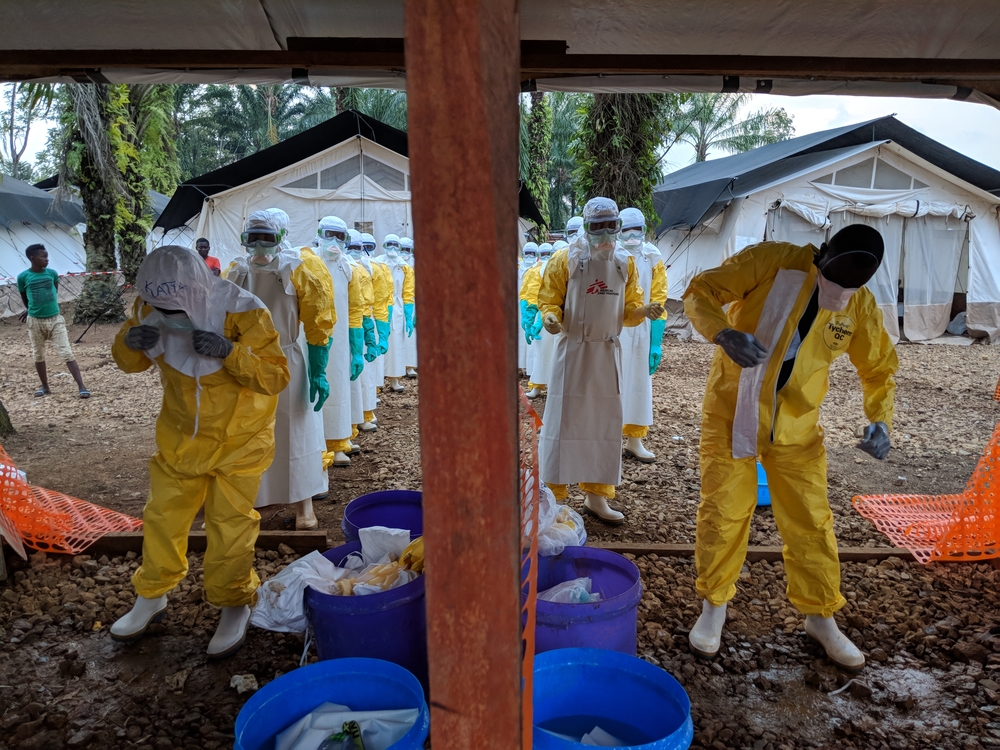 MSF has treated 65 confirmed Ebola patients in its first month of intervention in eastern Democratic Republic of Congo (DRC).

This is more than 80 percent of the total number of confirmed patients admitted to Ebola Treatment Centres so far this epidemic.

Of the patients confirmed Ebola positive in Mangina Ebola Treatment Centre, 29 have recovered and returned to their families while three patients remain under treatment.

“We are at a crucial point in the epidemic,” said Berangère Guais, MSF’s Emergency Coordinator in Beni.

“Yes, the number of patients in the treatment centre has reduced significantly but new cases from a number of different chains have emerged in recent days. We must continue to work with the community to build trust and ensure that everyone presenting with symptoms of Ebola are isolated and tested quickly. We cannot lay down our guard until the epidemic is declared over.”

"We knew we had to act fast"

MSF teams working in a hospital in nearby Lubero arrived in Mangina, the epicentre of the outbreak, the day before Ebola was declared in the province of North Kivu on 1 August.

They immediately began mounting a response against the virus alongside the Congolese Ministry of Health.

In the days that followed experienced MSF staff arrived from across DRC and around the world to help train local staff and work with them to care for the sick and prevent the outbreak from spreading.

“We knew we had to act fast," said Patient Kamavu, an experienced nurse from MSF’s Congo Emergency Pool who arrived on site on 3 August.

"When we arrived, we saw that the local health centre in Mangina was overwhelmed.

"A number of health staff were ill and the number of patients was increasing each day.

“They were doing their best but everyone was crowded together in one ward of the hospital. We had to work quickly to improve the situation for both the patients and the staff.”

By 6 August we had improved the safety of the isolation unit for suspected and confirmed patients in a ward of the Mangina Health Centre and constructed another inside the Hospital General de Reference in Beni.

The team had also begun constructing a treatment centre in Mangina. The Mangina Ebola Treatment Centre, with a capacity to care for 68 patients and expand to 74 beds if needed, opened on 14 August.

Thirty-seven patients were transferred from the Mangina isolation ward to the Ebola Treatment Centre that day. The Beni isolation ward was completed and handed over to the Ministry of Health who assigned its management to another NGO.

“Sadly, in this epidemic we have seen at least 17 health workers infected with Ebola"
Berangère GuaisMSF’s Emergency Coordinator in Beni

“We focused on patient care whilst our logistics and water and sanitation team worked day and night to complete a treatment centre that could care for patients in a safe way,” continued Patient. “It was incredible, we’d make visits to the site just one day later and see a totally different hospital appearing.”

MSF also constructed and opened a seven-bed transit centre in Makeke (on the North Kivu-Ituri border) on 28 August in response to a number of cases in the area. Now, suspect patients can be isolated and tested for the Ebola virus close to their homes and will only be transferred by road to one of the treatment centres if they test positive.

During this epidemic we have also been able to offer new treatments to patients with confirmed Ebola infection under a compassionate use protocol. These treatments are given only with the informed consent of the patient (or a family member if they are too young or too sick to consent) and are provided in addition to the supportive care (hydration and treatment for the symptoms of Ebola, like diarrhoea and vomiting) that MSF offers to all Ebola patients.

The protocol allows new drugs that are not yet registered to be offered to patients affected by outbreaks of deadly diseases like Ebola to give them a better chance of survival.

The decision on which drug is best for which patient is taken by a team of treating clinicians from MSF, the World Health Organization, the Institut National de Recherche Biomédicale, and the Congolese Ministry of Health.

“It’s a great relief to finally be able to offer patients more than supportive care. Statistically, Ebola patients have had less than a 50 percent chance of survival. This is devastating and terrifying to families and the community,” ends Patient.

Outside of Ebola Treatment Centres, our teams working in the Beni and Mangina areas as well as in Ituri, between Mambasa and Makeke (on the border with North Kivu), are visiting health centres and training staff on the proper triage of suspected Ebola cases.

Karin Huster/MSF
A hygienist is seen carrying boots to the laundry area of the treatment centre.

They are also donating crucial protection material as well as setting up isolation areas where patients suspected of carrying the virus can be safely cared for whilst an ambulance arrives.

Health centres in Mangina and Beni that have seen positive cases are also being decontaminated.

“Sadly, in this epidemic we have seen at least 17 health workers infected with Ebola," adds Berangère Guais.

"Health staff caring for patients with illnesses like malaria and pneumonia, or assisting women to give birth, must be protected by a proper triage system which identifies and isolates suspect Ebola patients before they enter a hospital.

“This will not only protect health workers but also their patients and prevent health centres becoming centres of amplification for the spreading of the virus.”

MSF has recently received approval to commence a vaccination campaign for frontline workers in the area between Makeke and Biakato.