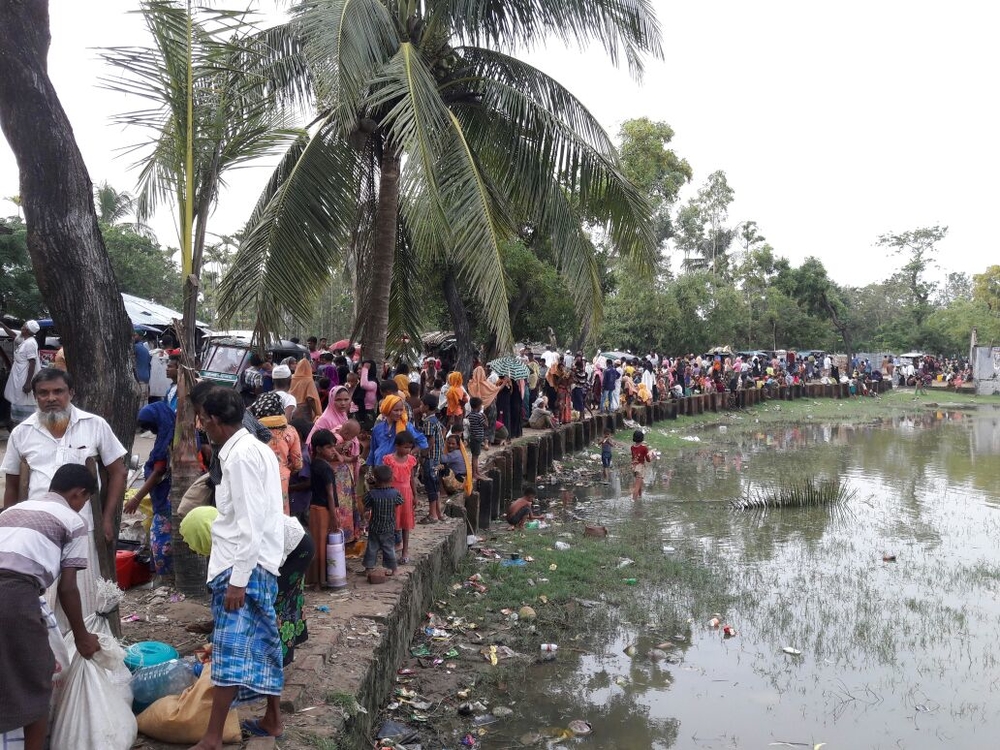 By 6 September, over 146,000 people had crossed into Bangladesh, fleeing violence in Rakhine state, Myanmar.

This figure, coming on top of 75,000 people who have arrived since violence began in October 2016, represents one of the largest influxes ever of Rohingyas into Bangladesh.

Many refugees stranded in no-man’s land

The majority of the new arrivals are now staying in existing makeshift settlements or UNHCR-registered camps, in three new makeshift camps that have emerged, or among the host community.

MSF
At least 146,000 people have now crossed into Bangladesh, fleeing violence in Rakhine state, Myanmar that started on 25 August.

Many refugees are stranded in no-man’s land between the border with Myanmar. Even prior to the most recent influx, many Rohingya refugees in Bangladesh lived in unsafe, overcrowded and unhygienic conditions with little protection from the elements.

“We’ve not had something on this scale here in many years,” says Pavlo Kolovos, MSF head of mission in Bangladesh.

I don’t know what to do, I feel so desperate
Rohinga refugee

“Our teams are seeing streams of people arriving destitute and extremely traumatized, and who have had no access to medical care. Many of the arrivals have serious medical needs, such as violence-related injuries, severely infected wounds, and advanced obstetric complications. Without a scale-up of humanitarian support, the potential health risks are extremely concerning.”

One 49-year old father told MSF: “I fled home with my whole family, but my son was shot while running away. I brought him to the hospital here in Bangladesh, but left the other family members in the forest in Myanmar, in the open air, just hiding there.

I haven’t heard from them for days now. I don’t know what to do, I feel so desperate.”

Additional nurses, midwives and doctors have been brought in to help respond, and MSF has set up a second inpatient ward at one of its two existing clinics in the Kutupalong area to accommodate the increase in patients.

MSF also is supporting in the increase of referrals to other hospitals and providing round-the-clock ambulances to transport patients.

“We are alarmed that hundreds of thousands of people still in Myanmar have no access to healthcare and that there are no actors currently able or allowed to respond on the ground,” says Kolovos.

“As vaccination levels in Myanmar’s Northern Rakhine State are very low, one of the first priorities should be a scale-up of vaccination campaigns against measles and other diseases for new arrivals.

More efforts are also needed to tackle high levels of malnutrition among the Rohingyas already in Bangladesh preceding this influx, as well as those still in Rakhine state.”

Although there have now been limited distributions of food, some refugees have only received dry biscuit rations and access to clean drinking water is a concern.

“I was given seven sachets of biscuits to feed my children when I arrived. That’s all they have eaten,” said a father of four who arrived three days ago.

“We’re currently staying in a school with my family but the school committee said we have to leave tomorrow. I don’t know where we will go.”